Hellblade: Senua’s Sacrifice is a dark fantasy, action-adventure video game that was developed and published by Ninja Theory. It released in 2017 for Windows & PS4 before finally coming to Xbox One in 2018. Unless you’ve been living under a rock it’s likely that you would have heard some mention of Hellblade. If so, you likely know of all of the many accolades it has attained. I’ve wanted to play it for some time and I recently had the opportunity, here are my thoughts.

Inspired by Norse mythology and Celtic culture, Hellblade follows Senua, a Pict warrior. She must make her way to Helheim by defeating otherworldly entities and facing their challenges. Senua persists  in order to rescue the soul of her dead lover Dillion, from the goddess Hela.

The main gameplay of Hellblade: Senua’s Sacrifice has you freely exploring the environments as Senua. Along the path you’ll encounter puzzles. The primary mechanic of these involves you using the landscape to visually locate symbols which unlocks the pathway ahead. Senua has a capacity known as “focus”. This gives her the ability to see things differently from other people due to her condition. This helps the player to trigger puzzle-related events. She can use her focus on totems hidden throughout the game. Doing this triggers a memory via voice-over of her friend Druth. He tells her of the tales of the Norsemen.

Hellblade: Senua’s Sacrifice serves as a metaphor for the character’s struggle with psychosis. Senua suffers from the condition but has been made to believe it is a curse. She is haunted by an entity known as the “Darkness”. This comes in the form of voices in her head known as “Furies”, and memories from her past. To properly represent psychosis, developers worked closely with neuroscientists, mental health specialists, and people suffering from the condition.

Hellblade features fights against malformed representations of Northmen who block her progression, including occasional bosses. These fights turn the game into a hack and slash. During these intense battles the Furies provide Senua advice in battle. Notably, they warn her if an enemy is attacking from her back. They react when Senua takes damage, and panic heavily if she is close to death. Another core mechanic is the possibility of permadeath. This is meant to delete the player’s save data after they surpass a certain number of deaths. 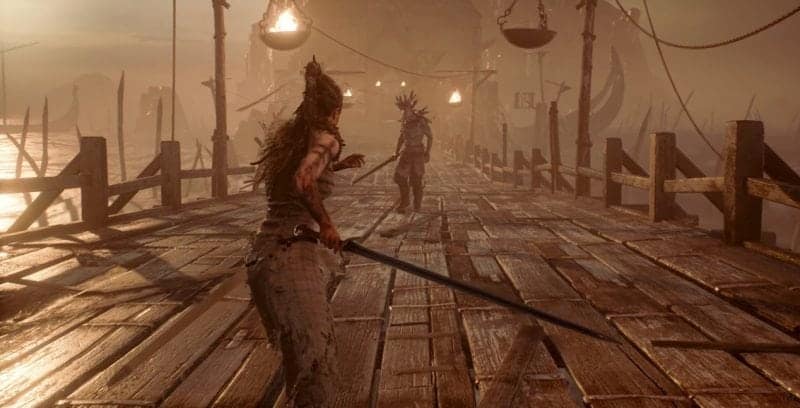 Firstly, I want to start by telling you to go and play Hellblade: Senua’s Sacrifice. It is unlike anything that I have ever experienced before in the medium. Although it may be short, I have no doubt it is going to stick with me for quite some time. There are a number of aspects that deserved to be praised with this game. However, I’ll start with the most obvious one. Visually, this is one of the best looking video games in existence.

I read an article that said Hellblade on Xbox One X looks as good as it would on PC, on maximum settings. I can see why somebody would say such a thing. The environments and Senua herself are extremely sharp, vibrant and detailed. I found myself stopping on a number of occasions and just taking in the beauty of it all. If there was ever a game to showcase the power of the X, this would be it. 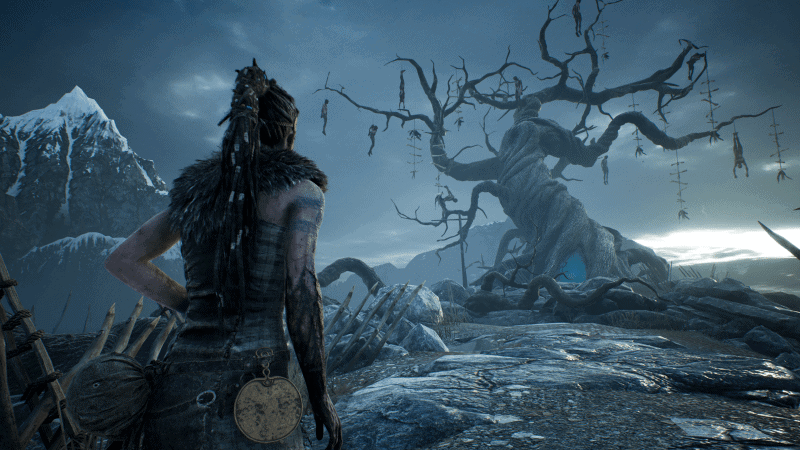 Senua’s voice acting and motion capture were performed by Melina Juergens. Interestingly, she had never done either of those things prior to Hellblade. To call her performance and delivery remarkable feels like a major understatement. It is emotionally raw and dripping with conflict. I felt fully invested in her perilous quest to save Dillion. It is an epic tale that has a bittersweet conclusion, one that is as simple as it is complex.

One of the Hellblade’s main selling points is the complexity of the themes that it focuses on. The ways in which Senua suffers with her psychosis is an important focal point surrounding metal health.

The Combat is brutally tense, desperate and hard hitting, I dreaded the next encounter. However, the mechanics are rather simplistic and it can become repetitive quickly. Still, Hellblade is surprisingly challenging even on lower difficulties.

Other than the combat, my only other criticism is aimed at the collectibles. These come in the form of 40+ totems that Senua can focus upon. This leads to voice-overs in which Druth tells a series of tales surrounding Norse mythology. Now, these are a nice addition, they are delivered well and help immerse you in the world. However, they merely serve as padding and can be distracting from the story at hand. Ultimately, they are not very interesting and drag on a bit.

Overall, Hellblade: Senua’s Sacrifice is an artistic masterpiece. It tells an epic mythological story that is combined with a very important subject matter.