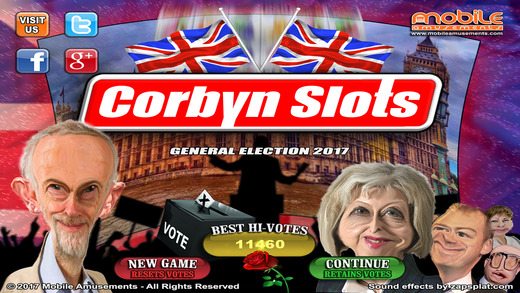 Corbyn Slots is a Election themed slot machine game from Mobile Amusements.  It was created to help promote and drive awareness of the Labour Party and Jeremy Corbyn in the build up to the UK General Election in June 2017.

The premise is simple – spin the slots and win votes instead of money. Any votes won are described as seats taken from the Conservative, Liberal, Green and UKIP political parties. There are an unlimited amount of votes to win, or lose, so you try to get as many as you can – forever, with no hope of ever really winning…..

I don’t think politics mix very well with video games. I think it is a clever way to try and engage younger voters but when your games are pointless and repetitive, I don’t really see them as being an asset. The biggest problem with a game like this is the fact that it doesn’t have an end you can reach before utter boredom sets in.

Politics aside, Corbyn Slots is a gambling game though thankfully not one that uses real currency or online play. It is purely a “just for fun” game with no way for you to spend money, even if you wanted to. That is a good thing. It suffers badly from that as well though.

With there being no danger of losing any money, and no real way to succeed, the gameplay consists of you just pressing spin, over and over again. If you can’t be bothered to do that, you could always hit the auto spin button. Doing that means your gaming involvement is watching 6 reels roll around. Sometimes giving you a win, sometimes not. It doesn’t matter though – you can’t win or lose.

There are no tactics to use – there are no hold or nudge buttons. Press spin, or don’t, and see if you win. It is fun, the first few spins, purely because you get to see the images on the reels where there are some goofy looking familiar politicians faces. Teresa May, Jeremy Corbyn, Ian Fallon etc… all make an appearance with a wacky distorted mirror effect. In the beginning there are a few breaks from normal reel spinning by a couple bonus features.

One is called Brexit (of course) where the screen has a few prize icons. Hit the button to stop randomly on one of them and that prize gets added to your total. The other has a line up of red boxes, kind of Deal or No Deal, but all you do is stop a flashing button on 7 of them to have their vote totals added to your total count. There are no other variations at all.

Other options are to decrease your stake. You can’t increase it. That seems to be tied to a levelling up process they have. It is simple. Win a load of votes, level up. Win more and level up again. The top end stake increases as you reach higher levels. There does appear to be a cap at level 30 so perhaps that is the ending you aim for. I doubt many reach it. I am on level 7 and am bored senseless by Corbyn Slots already.

The final thing of note is that despite the game makers insinuating that Corbyn Slots is all about promoting the Labour Party, they have littered the game with ads. They are everywhere. The ads pop up even mid spin or as you enter bonus features. They even pop up again, seconds later, as you exit the bonus feature. I am not against developers making some money from their efforts. Of course they should. Just don’t make out like the app only exists to promote someone or something. It clearly exists for financial gain as well.

So, fun for a few minutes and if you like gambling but aren’t good at it, this may pass the time as a risk free slots game. The oversaturation in ads will get on your nerves quickly and the game becomes dull and boring very early into it. Still, it is free to play and there are no in app purchases either so it isn’t all bad.

Why not give it a go yourself from the links below?