Combining 2 parts of a Japanese anime based on the Sonic the Hedgehog franchise. Put together the length reached an hour & on release in the West saw it given the movie treatment (although heavily cut in some versions – reasons explained below).

While looking ultimately like the characters its Japanese anime style is all too obvious throughout. You might think this might look horrible by today’s standards but it holds up really well.

It opens with Dr Robotnik creating Metal Sonic with a plan to finally defeat the Hedgehog. Meanwhile Sonic is relaxing on a beach as Tails tests out his new jet-propelled surfboard. Their fun & relaxation is disturbed by the crashing plane of, Old Man Owl (I have no idea who this dude is). Sonic rescues him & discovers he has a message from the President for Sonic. 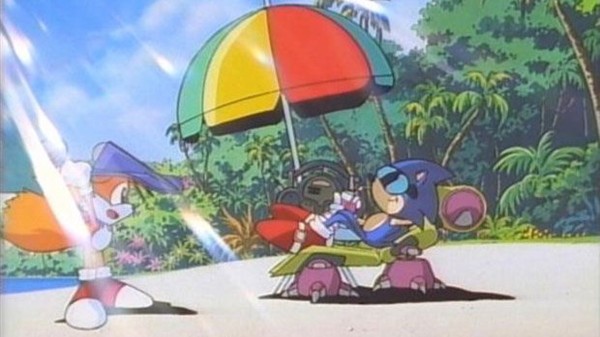 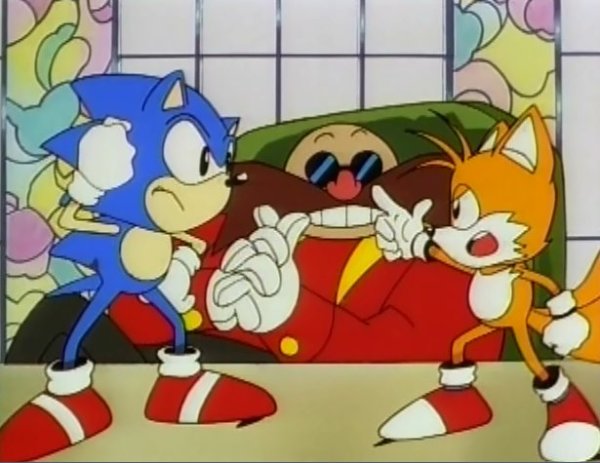 Unhappy about having to help but agreeing Sonic & Tails set off to the Land of Darkness. Once there they run into Metal Robotnik who is trying to stop them reaching the generator. With the help of Knuckles they manage to defeat the robot & discover that it was Dr Robotnik all along.

He tricked Sonic into coming so he could copy his memories, personality & knowledge to put into Metal Sonic. His eventual plan being to melt the ice caps holding the Land of the Sky up & marry Sara…can Sonic stop the evil Doctor before it’s too late or will Metal Sonic prove that it is now the one-true Sonic?

What is a surprise is just how much fun the movie is…its fast-paced action with a really enjoyable story. Just enough characters are involved to help the story without it feeling bloated. The dubbed voice acting is a bit child-like but exactly what I would expect from Sonic & company.

It’s all perfectly enjoyable except for Sara who is both the most annoying character in the film & the most sexualised. I’m not kidding some of her scenes include Dr Robotnik groping her, Tails grabbing her boobs ‘by accident’, Metal Sonic seeing up her dress & being called a pervert & even a future dream of her pregnant & breast-feeding.

I’ve not been this shocked by something Sonic related since I played the terrible Sonic the Hedgehog game on the Xbox 360.

The anime style is still impressive & it suits the characters perfectly, the story is strong & engaging but the many sexual scenes involving Sara makes for uncomfortable watching.

The Sonic The Hedgehog Movie