A game like Civilization Revolution seems like the perfect match for an iPad or tablet. One of the most user friendly strategy games on consoles, even a slimed down version would be warmly received as long as the price was fair.

They almost get it right…

The gameplay of Civilization Revolution on iOS is simple…there are a few options offering set scenarios, random maps & a scenario generator.

The scenarios are the most fun tasking the player to reach certain conditions within certain parameters & there are currently 20 to choose from. With the random map generator & scenario generator as well there really is a wealth of content to keep you coming back for more.

There are 5 difficulties to choose from when you first start a game. Chieftain being the easiest & Deity being the toughest…each bring their own challenge but you’ll have to be very adept at the game to win each time on Deity.

Chose a leader from a large selection of famous faces that include…Alexander the Great who controls the Greeks, Bismarck who leads the Germans & Elizabeth who controls the English. Each leader comes with their own perks that will change gameplay for you & your opponents.

Each generated map will see you facing off against numerous other leaders for world dominance & there are number of ways in which you can win the game.

It’s important to note here that one of the more enjoyable aspects of Civilisation Revolution is how your people & cities expand as time goes by. At the start you’ll probably have a handful of units using spears & bows but by the end you will be in control of tanks & nuclear weapons. The progression system is really well done here & moves at a stellar pace. 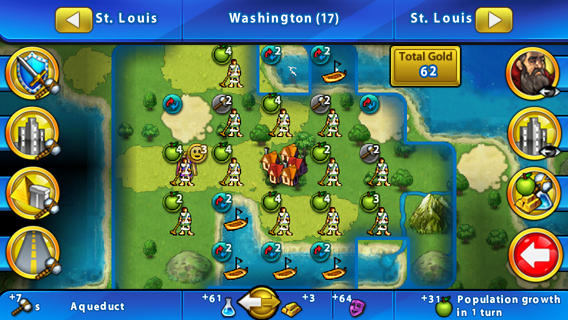 Moving units is a simple as tapping them on screen & either dragging them to the location you want them to go or just by tapping it. Each unit has different commands such as defend attack, heal, wait & each effectively cost you a turn. When under attack you can move units to a building to fortify it adding protection for both the unit & building.

You’re not just given one city either…expansion is key & settlers can build you new cities. You do need to think about where you’re placing them though as resources are important.

You’re able to keep tab on your cities as they grow & put focus on certain other resources instead. It’s only minor adjustments but helps keep the game simple & fun to play.

The game is turn based but until you meet other rulers you’ll continue at your own pace. Once you meet them things really get interesting as diplomacy is key to avoiding early battles. A lot of these rulers are quite demanding & it will be up to you to balance their needs or rush into needless wars.

You can win the game in numerous ways with the most straight forward being the domination route which involves you destroying all you’re enemies & taking their cities as your own.

The most fun route is probably the Technological though which requires you to research all techs until you’re able to launch a space ship & reach Alpha Centauri.

The iPad version of the game costs £4.99 & is worth every penny however multi-player was added at a later date & costs an additional £2.29. It offers more ways to play & a chance to face off against 4 other people.

Additionally there are plenty of other pay for packs including new great people for £1.49, new national wonders for £1.49 & new buildings for £0.79. None of them are really that useful & won’t extend gameplay much.

The game runs well & I never really experienced any issues with slow-down or crashes. The music at times would randomly stop but a quick restart seemed to solve that problem.

An excellent conversion that keeps much of what made the console game so addictive. Easy to understand with responsive controls & plenty of gameplay to keep you coming back for me.