As a huge point & click fan I’m over-joyed to see Broken Sword 5: The Serpent’s Curse gets its full release on Xbox One. These games are a dying breed & I can only hope that it’s successful enough to warrant future sequels & more developers taking chances on the style of gameplay.

The game opens in 1937 as we see a painting being seized during a shootout in a Spanish villa. A young boy & his mother manage to escape.

Jumping to modern day in Paris we meet our series stars, George Stobbart & Nico Collard. They have run into each other at an art exhibition. George is there as the company he works for insured a painting in the gallery while Nico is covering the story for her newspaper. While catching up an armed robber enters the gallery & steals La Maledicció, a seemingly unimportant painting.

The gallery owner, Henri attempts to stop him & gets shot dead in the process. La Maledicció was no ordinary painting with a priest claiming it is evil & cursed. The painting is revered by the Gnostic faith, a branch of Christianity whose purpose is to raise the devil. 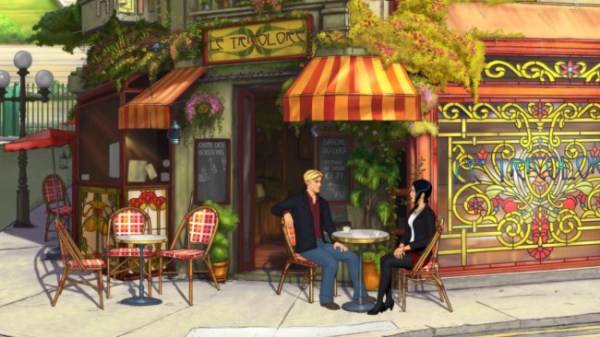 Story-wise Broken Sword 5 is fairly complicated compared to some of the earlier games in the series. Understanding the Gnostic faith & what they aim to do can get a bit confusing but the game makes admirable attempts to keep you informed. It’s an incredibly interesting story mixing fascinating new characters as well as some series regulars.

The voice-acting is excellent & fans of the series will be happy to hear many of the same voices coming from the same characters. Praise also has to be given to the subtle use of music. The Broken Sword series has never had grandiose themes (except at certain important parts) but used soft musical moments when solving puzzles, talking to people etc. and here it’s done ever so well. Very memorable stuff.

Broken Sword 5 looks incredible on a big screen in HD, going back to its 2D roots ensures a level of detail that can’t be found elsewhere. Every new area just draws you in. That the characters are in 3D can be a bit disconcerting at first but it’s a minor complaint for something that looks so wonderful.

Where Broken Sword 5 takes a few mis-steps is with its puzzles. Any point & click game worth its salt has puzzles & there are plenty to solve through the adventure. The problem lies in the scale. There are either very easy or very tough. There is little middle ground & some later puzzles can leave you very frustrated as you struggle to decipher ancient Gnostic cyphers.

There is a hint option in the menu but a game like this needs you’re full attention as you overcome the many obstacles involved.

As it stands this is easily the 3rd best Broken Sword to date. That might not sound like high praise considering there are only 5 but it is a great game. The first 2 games are classics & this one is nipping at their heels.