Atmospheric/progressive rock band, Elysium Sky, will play in Heat Five of Metal 2 the Masses Essex 2019. They face off against Osmium Guillotine, Audrey Ripper and Spidervayne on the 15th of March. The event takes place at The Soundhouse which is at The Bull, Colchester, CO3 3ES.

Each band will be giving their all to try to progress in the competition where the winner receives an amazing opportunity. A much coveted slot playing on the New Blood Stage at Bloodstock Festival, 2019. GBHBL are pleased to bring you a short interview with Elysium Sky to help introduce them further to the metal masses.

Have a read, enjoy and make sure you get down to The Soundhouse on the 15th of March to give them some support.

1 – Why Elysium Sky? Where did the name come from?

The name was actually co thought up with a previous band member, back in 2013, way before the film Elysium with Matt Damon was a thing. I think a few months after we decided on the name, the film advert came through on the telly, and we were like WTF, they stole our band name. The Sky was added on the end to take away reference from the film, with meaning being the gates of Elysium in the Sky. Now in 2019 we are happy to say Elysium Sky ranks above the Film in a google search (SEO mastery).

2 – Tell us a little about Elysium Sky. How long have you been playing together? Who is in the band? Where are you from? How did you meet?

I first started looking for band members back in 2012. I was homeless at the time, it took around 4 years to get my personal life back on track, whilst meeting musicians and have them come and go in the band. After a few line ups, from 2016, Elysium Sky settled down into the format it is today, with Matt Cottrell on vocals, Paul Hinton on Bass, Graham Lemon on Guitar, myself, Jean-Paul Dehavilland also on guitar and Alex Sandor Kis on Drums. We are kind of scattered about to be honest, from Colchester, Southend On Sea, London and Luton, but we are great friends and really supportive of each others creative process. 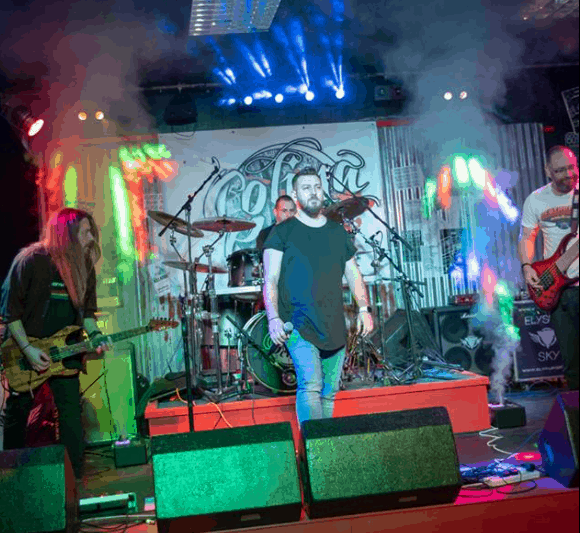 3 – What artists, metal or otherwise, have influenced you and your sound?

We all have different bands we could call influences, ranging from Pink Floyd, Queensryche, Katatonia, Rammstien, Alice in Chains, Aerosmith, Dream Theater, Korn, Slipknot,  I could go on but this is about us right?  😉

4 – With so many genres and sub genres around these days, what genre would you put yourself in?

5 – What will you bring to the Metal to the Masses heats? What can music lovers expect and how are you going to win their support on the night?

We will be bringing nothing but originality. I am quite confident in saying we do not sound like any other band, not that that is a good thing in these competitions, but we are who we are and sound like we do and we hope people enjoy our show. All the bands I have heard or seen play these M2tM events are all absolutely fantastic. We understand there is only one winning spot, but in my opinion most of these unsigned bands are way better than the main acts already lined up to play Bloodstock, but we are really grateful for the chance to play, get some new fans and meet some really cool unsigned bands.

6 – Any horror fans in the band? What are some of your favourite horror movies or books?

Of course, you can’t really beat the old Horror films like The Exorcist (1973), Omen, The shining, Poltergeist, anything since or recent is just a bit lame really. The scariest part of The Conjuring films, for example, is the price you pay to get into the Cinema. (also a huge Sci-Fi fanatic)

7 – How about games? What’s your console or game of choice?

Personally there aren’t really enough hours in the day to fit in everything that you have to do to pay the bills, write cool riffs and songs, band promotion, social media and website maintenance, family commitments AND play computer games! That being said, I am level 40 something on Witcher 3, and I’m not a complete stranger to Fallout 3 & 4, Graham is also addicted to Real Racing 3 on his Iphone.

8 – Have you been to Bloodstock Festival before?

Yes I have around 2010/2011, and Paul has probably been to all of them, he goes to every gig event,everywhere, like all the time, every week, its really annoying actually.

9 – If yes, what is it you love most about the festival?

To be honest I was really drunk at the time, I remember it was real loud, that’s always a good thing!

14 – Where can fans check out your music, merch and find out more about you?

We are everywhere, the best place to start would be our website www.elysiumsky.org, NOT http://www.sonypictures.com/movies/elysium/!!

15 – Aside from hopefully playing Bloodstock Festival, what else do you have lined up for 2019? Any releases due or tours/gigs/festivals line up?

We have had a steady stream of gigs lately, with a few more lined up in London, but we are currently writing for our 2nd album, so really we need to take some time to get that right, it will be quite a magical release, thats all I can say…..

GBHBL would like to thank Elysium Sky for taking the time to answer these questions and we wish them all the best in their heat at Metal 2 the Masses Essex. Find out more about Elysium Sky at their Facebook page and on YouTube. Head over to their website where you can keep up to date with news on releases and gigs as well as picking up some music and merch.

Importantly, get yourself down to the venue on the 15th of March and throw them some support.