Tommy Johansson is well-known as the guitar player of the Swedish metallers Sabaton. But before he joined the Swedish “war machine”, he was already busy playing in his own band named Reinxeed, currently completed by bassist Chris David and guitarist Alex Oriz. Of course, his touring activities with Sabaton has since slowed down the creative process for Reinxeed.

The group has now returned – seemingly out of nowhere – with a new 10-track album entitled ‘Above The Sky’ and a brand new name, Majestica. On the new record, Tommy presents not only his guitar skills but also his vocal abilities once again.

Tommy states, “It’s been many years since we last released an album, so we decided to ‘start over’ as a new band, Majestica, instead. It’s not only a majestic and epic name for a power metal band from Sweden, it’s also a tribute to the album »Majestic« that we released with REINXEED in 2010. We came up with it and it sounded great, it felt perfect for this kind of music and just feels right.”

Above the Sky will be released on June 7th 2019 via Nuclear Blast.

Get that fist ready, it’s needed. Needed to put high in the air as a salute to Majestica and their ten track offering, Above the Sky.

Getting the blood pumping powerfully, the opening title track is so power metal anyone could recognise it without knowing a thing about the band. However, that doesn’t make it a bad track, far from it. In fact it’s absolutely brilliant as the guitars shred, ripple and tear through a myriad of riffs and hooks. The vocals raise the stakes with wonderful cleanliness and so much power all while the drums sound a march to war and the symphonic elements get the hair standing up on the back of the neck. That bloody chorus will make you feel ten-feet tall.

A galloping rhythm and soaring set of vocals impresses on Rising Tide bit it’s the horns/drums combo near the end that blows things out of the water.

After such a ‘majestic’ double header, The Rat Pack brings things crashing down to earth with a plain and uninspired number. Not bad but could have been any power metal band ever. Thankfully the slump is short lived as Mötley True gets a folk party going with bouncy rhythm and 80s gothic melodies. Far more fun then it should be even if it goes on a little too long.

The hyper power metal pace is back for The Way to Redemption and with it the excitement. At this speed, Majestica seem to be at their best and the frantic guitar hooks and screeching high vocals just work so very well together. Whereas the synth and 80s hair metal chorus of Night Call Girl is fun and Future Land is a wonderful little oddity that will get stuck in your mind for hours afterwards.

Any chance of slowdown is completely dismissed the moment The Legend gets started and once again the urge to throw a fist high to the sky is strong. It’s so damn catchy and the harmonising vocals really impress. Father Time then gives us power metal gold, a track that has a bit of a tongue in cheek about it. It’s definitely Majestica having some fun as the brief inclusion of the ‘Can-Can’ and a certain Queen-inspired section shows.

The positive nature of the album can’t be understated and by time we reach the finale of Alliance Forever, you kind of don’t want it to end. The story must come to an end and as the last pages are turned, the tears come but not of sadness, no. These are tears of joy as Majestica see us off with one final rousing statement.

Aside from the odd misstep, Above the Sky is a thrilling listen and nails exactly what it means to be a power metal band. 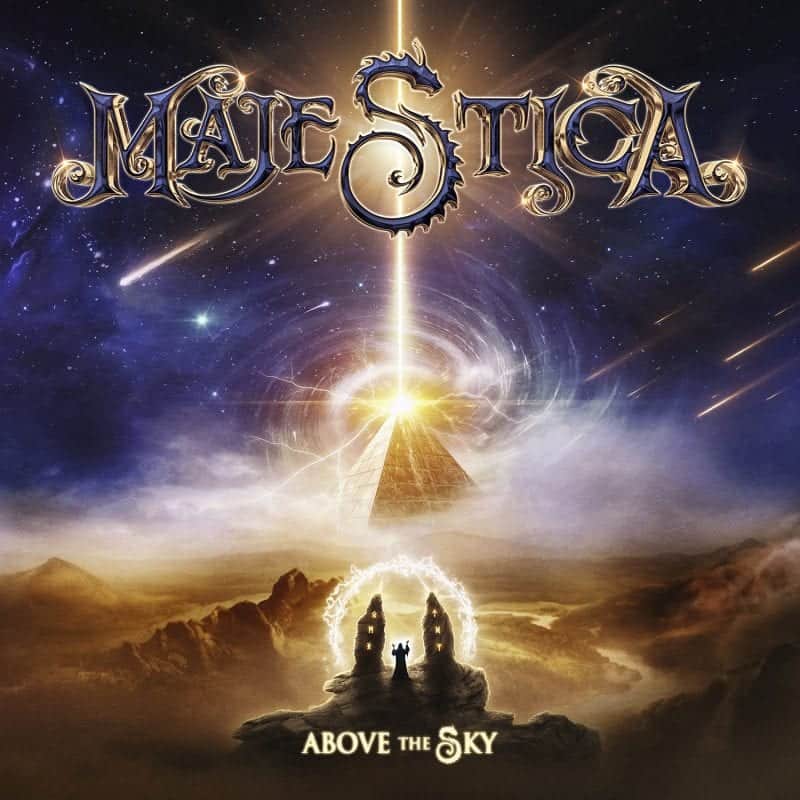 Majestica - Above the Sky (Nuclear Blast)