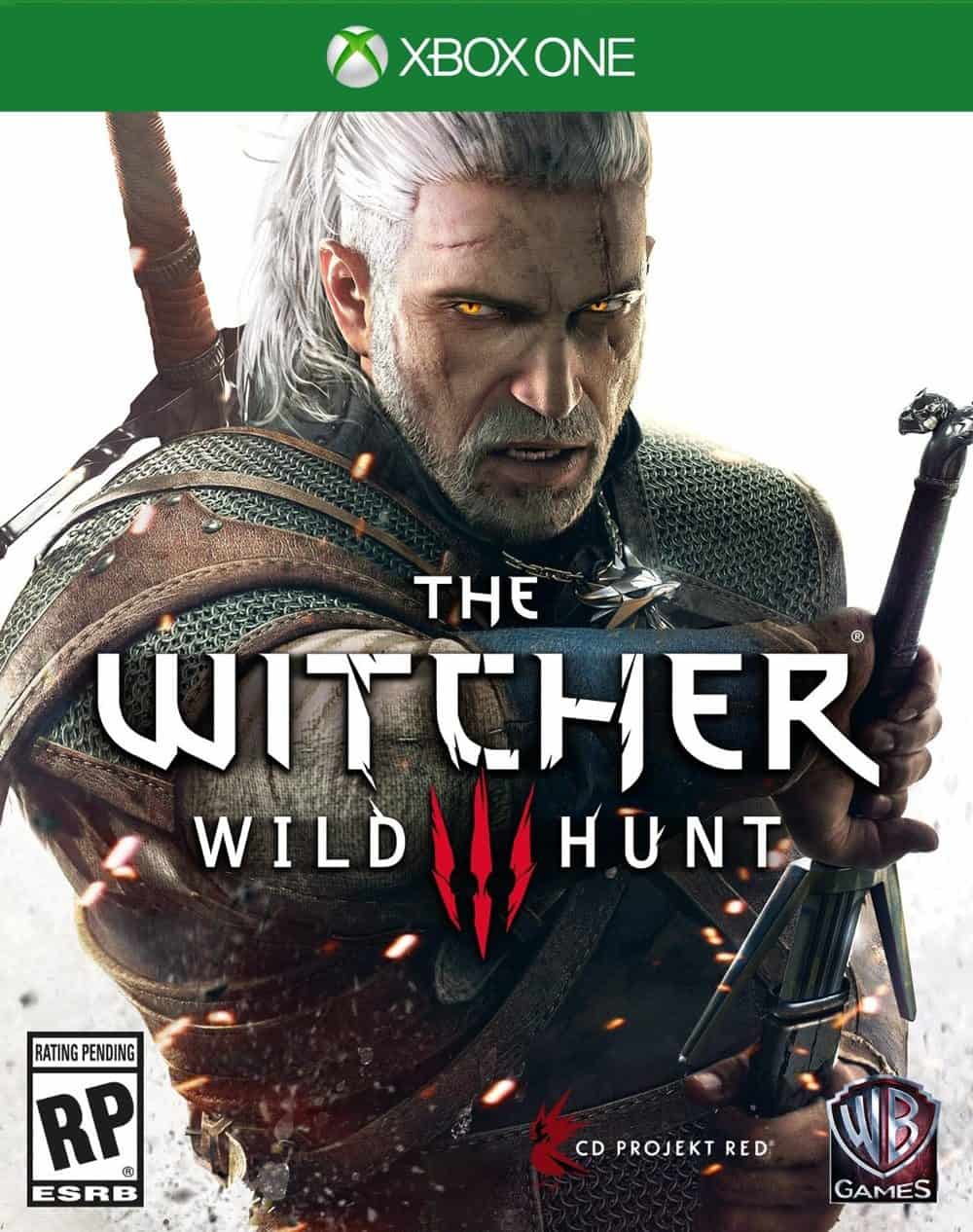 The Witcher 3: Wild Hunt is one of the most highly anticipated releases in recent years, garnering a passionate following since footage of the game debuted at E3. It promised a huge, diverse open world more than 30 times the size of previous Witcher games. It guaranteed an array of activities and detailed quests full of interesting characters and fantastical stories in which your choices as Geralt Of Rivia would decide the fates of others and help shape the world around you. It pledged to deliver exciting, tactical combat in which you could unleash Geralt’s two swords and magic spells upon various enemy types but that’s just the tip of the iceberg. I’m a huge fan of open-world RPGs, this meant that I was very excited for the release of the game; an excitement that doesn’t come along that often. Based on the aspects of the game that I just mentioned as well as it boasting to contain over 200 hours of gameplay, in theory The Witcher 3 sounded like my perfect game but does it deliver on those promises?

The Witcher 3: Wild Hunt concludes the story of the Witcher Geralt of Rivia, the series’ protagonist, whose story to date has been covered in the previous games. Geralt seeks to move on with his own life, embarking on a new and personal mission while the world order itself is coming to a change. Geralt’s new mission comes in dark times as the mysterious and otherworldly army known as the Wild Hunt invades the Northern Kingdoms, leaving only blood soaked earth and fiery ruin in its wake; and it seems the Witcher is the key to stopping their cataclysmic rampage. 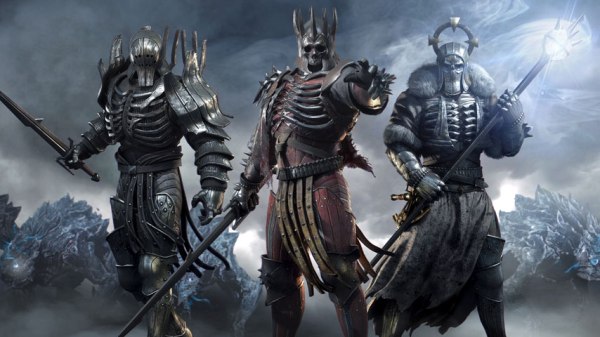 The game begins with Geralt’s dream about Kaer Morhen, a demolished Witcher school. Yennefer, a sorceress and his love interest, contacts him because she is afraid that Ciri, their adopted daughter, is training without permission. Geralt finds Ciri and brings her back to Vesemir, her teacher. However, the Wild Hunt, a phantom army whose appearance is the beginning of the end of the world, kidnaps Ciri. While Geralt wakes up, he realizes that was a bad dream and he is still in a journey to find Yennefer. Geralt sets out on an epic journey to finally find his beloved Yennefer and do whatever he can to keep Ciri safe from the Wild Hunt who are fully aware of her extraordinary powers to cross time and space. 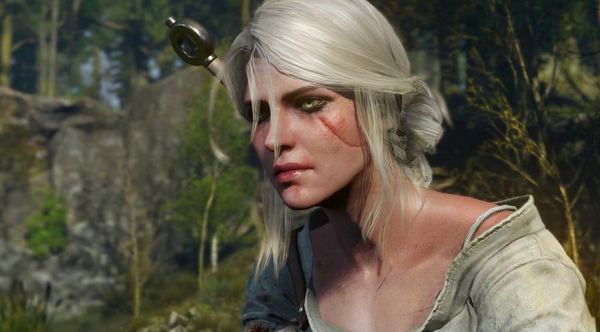 It is not necessary to have played the previous Witcher games to fully enjoy Wild Hunt. While similar to the previous Witcher games, Wild Hunt has improved on several aspects from past games. Combat revolves around an action role-playing game system combined with the use of magic. The fighting system has been completely revamped. Wild Hunt introduces some new mechanics, such as Geralt’s Witcher-sense, combat on horseback and at sea, swimming underwater, and using a crossbow. Additionally, Geralt can now jump, climb, and vault over smaller obstacles. Item creation and potion brewing still remain as in previous games, but have been modified from The Witcher 2. 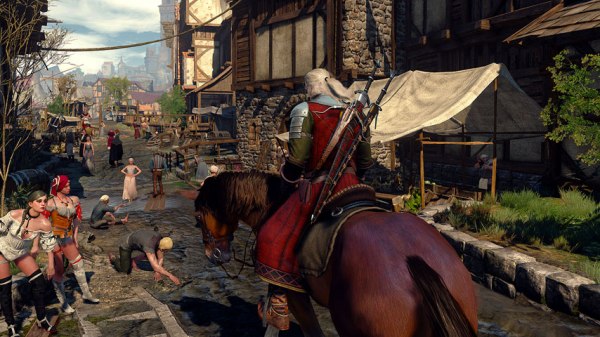 The game features advanced AI and responsive and dynamic environments. The day and night cycle influences some monsters and their powers, similar to how a werewolf would gain powers during the night of a full moon. The game also features a dynamic beard growth system, in which the beard of the playable character Geralt grows as he travels between regions. 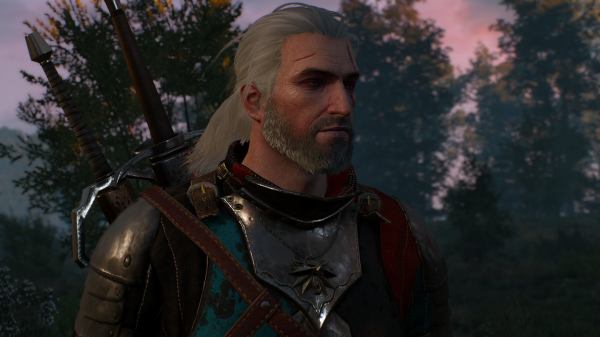 That’s the basics, where do I begin when attempting to give my opinion on this game….

One of my absolute favourite things about this game is the commendable love and care that has gone into crafting the world; this is a world that really feels alive and lived in. Villagers seamlessly wander around doing their daily chores while having, interesting and elaborate conversations along the way. 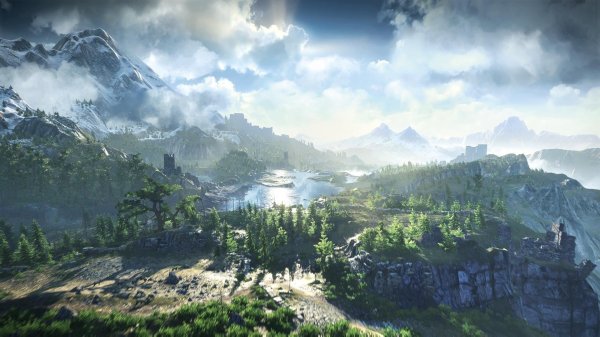 This leads me on to one of the games strongest aspects and that’s its writing and spoken dialogue, the amount of time it must have taken to record all of the lines spoken in the game is pretty crazy to imagine. Characters express emotion through their voices and facial expressions in ways that I’ve never seen before in a game this huge. Basically, the voice-acting is exceptional; even for random NPC’s and minor characters. This is very important in game that contains so many dramatic, emotively charged scenes, a few of which that are guaranteed to make you tear up. That being said, The Witcher 3 can be very funny and has some very well placed scenes to lighten up the darker tones of the game. Protagonist Geralt is void of emotion but don’t let that fool you into thinking that the guy isn’t witty as hell, his dry sense of humour can lead to some hilarious conversation options. The combat is fluid, tense and very rewarding. You won’t have to venture very far before you encounter something trying to end your life. It’s a huge world out there and you’ll be tempted to explore, just be careful where you venture because it’s very easy to die in this game but it makes it that much of a delightful challenge. 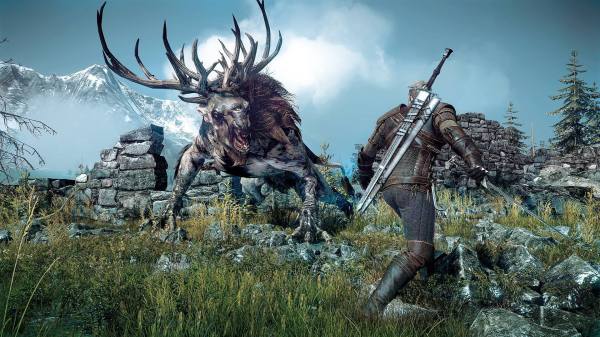 The fantasy world that CD Projekt RED has created is really quite amazing. It’s undoubtedly huge and highly detailed; it’s not hard to see the love and care that has gone into designing it. 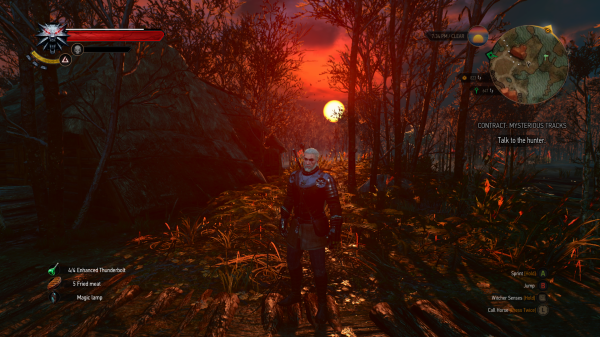 I already have fond memories which involved me simply sailing a boat as a fiery sun set in the distance as wind whistled past the sail and the shimmering water splashed against the side. It’s wonderful to experience these quieter moments to sit back and really appreciate the undeniable beauty of the world. 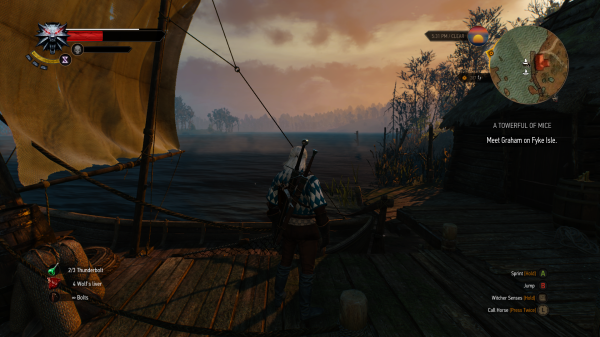 Everything seamlessly moves through the excellent day/night cycle as well as the dynamic weather system. 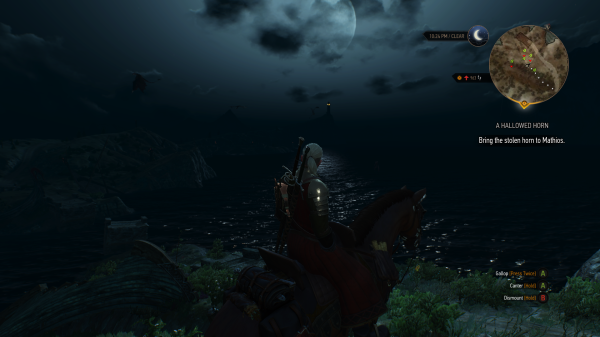 It’s abundantly clear that great effort has been put into the many side quests, Witcher contracts and treasure hunts. It’s very easy to get completely sucked into side quests that have little to do with the main quest, many of which are so huge that they end up feeling like main quests themselves. I highly recommend experiencing as many as you can as a number of them lead to some of the strongest moments/scenes in the entire journey. The events that take place in a lot of the quests in the game will lead to some kind of future event taking place, these will likely alter the ways in which characters react to you and how the story ultimately unfolds. 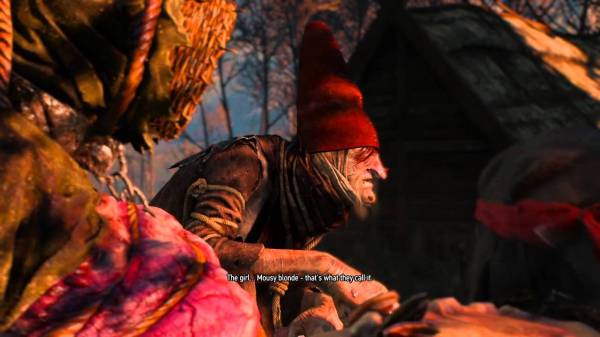 Your decisions really do feel important to the world and how it’s shaped around you in a way that no other open world RPG has ever come close to accomplishing. I genuinely think that going forward players are going to expect this level of importance which really puts a lot of pressure on games like The Elder Scrolls and the up and coming Fallout 4 to deliver the same. 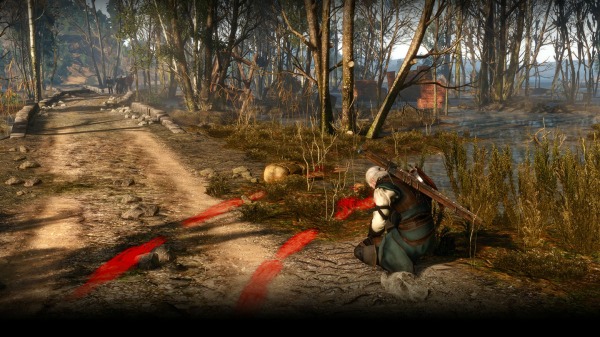 What would a game like this be without love interests? I’m not talking about the quick flings you can have at the local brothels but of course the almost impossible choice between Triss and Yennefer. The relationships you form with these two ladies and many others in the game leads to some tough choices so pick your dialogue options wisely if you want any chance of, you know. However, to say that Triss and Yennefer are simply love interests for Geralt would be doing them a disservice. Both play a hugely important role in the story as do a host of other memorable characters.

Accompanying you along your journey is your faithful horse roach of course but along with that is a memorable, truly beautiful soundtrack that suits the game perfectly. It hits heights at exactly the right moments, creating tense battles and plays more sombre songs at others. Whether you’re riding Roach through the vast landscapes of Novigrad or sailing a boat through the rough seas of Skellige, you’ll be guaranteed to see something interesting. 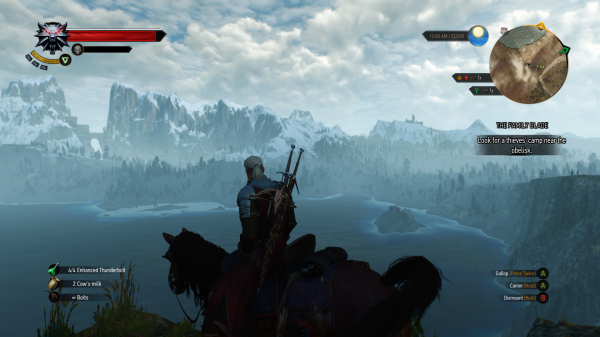 If all that wasn’t enough, The Witcher 3 has it’s very own card game called Gwent. It’s seriously fun and addictive, you’ll struggle at first but once your deck begins to grow stronger its genuinely satisfying. I can’t remember another mini game/card game that I had this much fun with, I ended up playing against as many people as I could. 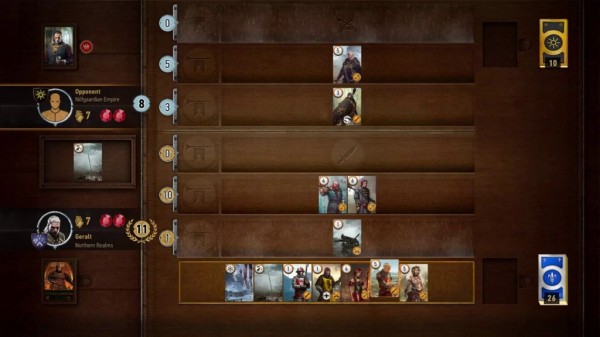 With a world as huge as the one in The Witcher, you might think it would be riddled with bugs much like the way Skyrim or even Fallout New Vegas was when released but you’d be wrong. Not entirely wrong as there was a single treasure hunting quest of mine that became “broken” after a bug but I’ll give it a break on that one. I experienced a large amount of texture pop in and quite a few, easily fixable visual glitches.

After over 120 hours with The Witcher 3, I still had a map riddled with question marks and things to discover. Even after all that time I was saddened to see Geralt’s journey come to an end but I knew I had experienced something that I will look back on nostalgically for many years to come. In my opinion a 10/10 doesn’t necessarily mean that a game is “perfect” but instead means that it sets the benchmark for other games in the genre at the highest level. It changes what you expect of a game of that genre and will be used as a blueprint for future open world RPGS. I applauded the game’s graphics, world design, large amount of content, story, and its overall gameplay. I thoroughly enjoyed my experience and feel it lived up to the hype and delivered on its claims even if the superior version of the game is evidently on PC. I look forward to the many DLC’s to come and hopefully someday some kind of continuation. The Witcher 3: Wild Hunt is not only one of the best games ever made but it’s quite possibly the best RPG ever created.

0 thoughts on “Game Review: The Witcher 3: Wild Hunt (Xbox One)”