The first season of Scream Queens took me by surprise in that I expected it to be entertaining but I didn’t quite expect it to be as entertaining as it was. It’s a horror/comedy slasher series that mainly focuses on a particular sorority of girls. It sounds a little generic but in a lot of ways that was its charm and it did a great job of paying homage to most slasher films throughout movie history. There were inventive deaths; hilarious moments and a really well put together mystery regarding the identity of the killer. Season two was announced soon after so let’s see if it was capable of replicating the quality of the first.

After the events at Wallace University, Dean Cathy Munsch becomes a global icon and purchases the C.U.R.E Institute in order to reform America’s health care system and to cure incurable diseases. Hester confesses her crimes, leading to the Chanels’ release from prison. Cathy hires two doctors, Dr. Cassidy Cascade and Dr. Brock Holt to fulfil the mission of the hospital, and installs Zayday Williams and the Chanels as medical students. Meanwhile, flashbacks back to 1985 shows the hospital’s dark past, as a new serial killer surfaces: the Green Meanie. 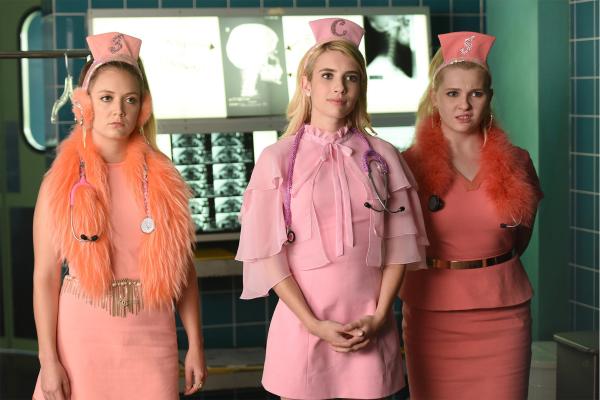 That’s my attempt at explaining the plot to season 2 of Scream Queens in the most simplistic way possible.

Scream Queens Season two is pretty much more of the same except the whole mystery revolving around the Green Meanie was handled in a much more sloppy way compared to the Red Devil. 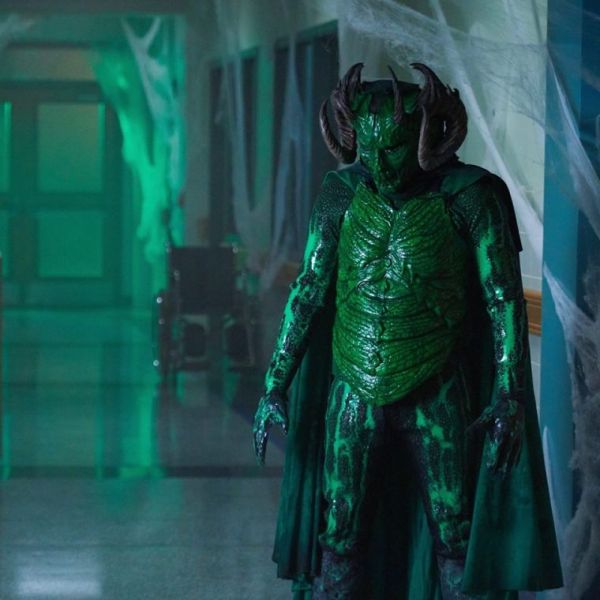 The way in which the Chanels and Dean Munsch are brought back together is a little bit nonsensical but this is definitely not a TV show that is making much of an attempt to make logical sense. Scream Queens’s season 2 isn’t trying to be particularly intelligent, it’s purely aiming to entertain and I cannot deny that’s exactly what it does. I love these characters. Who cares how they are brought back together as long as I can see them interacting in hilarious ways?

I said it in my review for season one and I’ll say it again. Emma Roberts was born to play Chanel Oberlin. Her plan to avoid being killed by the Green Meanie involved her recruiting new Chanels. Just so she can literally use them as meat shields.

If you enjoyed these characters then you’ll be pleased. As I mentioned it is mostly more of what you would expect. The creators of the show didn’t really attempt to evolve the characters in any way. Instead they’re thrown into a brand new scenario for hilarity to ensue.

Even Chad Radwell makes a return. I was very happy to see him as some of the funniest moments in the whole season take place when he’s on screen. Unfortunately he doesn’t stick around for too long. I do feel his absence hurt the remainder of the season.

I found Dr. Brock Holt to be a really good addition overall. The storyline about his hand that once belonged to a serial killer led to some very funny moments. I can’t really say the same for Dr. Cascade as I’m just not much of a fan of Taylor Lautner. He does a decent job and his interactions with Chanel #3 are amusing even if that whole arc felt a little forced to me.

I think Chanel #5 is underrated. She manages to stay consistently funny throughout. Even when most of the jokes are at her expense.

So you have the same entertaining characters and a great setup for another serial killer mystery, what went wrong? I mentioned it above but the best word I can think of to describe it all would be sloppy. It all feels far too rushed and lacks much of the intrigue that the first season had in abundance. I don’t know, it could just be that we’ve already seen it happen before with the same people and it just doesn’t feel fresh and new like it once did.

Also, for whatever reason they seemed to cut down on the gore which was very disappointing and something that hurt the show in a huge way for me. There weren’t even very many inventive kills which is weak considering the setting is perfect for many.

The best thing this season did was the various bizarre “incurable” diseases. Unfortunately, it felt like they were trying a little bit too hard to gross out viewers.

Scream Queens’s season 2 is a little bit of a rehash of the first season. It has the exact same characters who have learned very little from their previous experiences. It’s still a really fun watch for fans of the genre but if you were hoping for another clever mystery surrounding a slasher villain then you’ll likely be quite disappointed. Mainly with how rushed & uninspired it feels. I do hope this isn’t the last we see of Scream Queens, it’s anything but boring.