It’s not the easiest thing to get excited about season three of the From Dusk Till Dawn TV series. A pretty poor first season did not start things off well & the second tried to right much of the wrongs, thanks to it no longer being hamstrung by the film it was based on. It managed to be more entertaining even if it still had its problems…a lot of problems.

You can read reviews for them both by clicking on the links below.

TV Series Review: From Dusk Till Dawn – Season One

Be warned that this review will contain serious spoilers for those first two seasons.

Season 3 opens showing the destruction of the Titty Twister by Carlos. Here though we see what occurred after it blew up as two sets of hands burst from the ground. One is a demonic creature while the other belongs to a man who declares that he is finally free.

This sets up some of the villains of the series straight away & is a welcome change from the dragged out style of the previous seasons.

We then see what happened after Seth (DJ Cotrona) & Richie Gecko (Zane Holtz) killed Carlos (Wilmer Valderrama). They have a meeting with the remaining lords of the culebra (snake-vampires) & are given the title of ‘Collectors’.

Seth & Richie are ‘collecting’, something Seth really doesn’t like doing feeling that it is below him. It’s during a badly handled collection that the issues between the brothers rise up again. Being the third season the brothers play off each other fantastically & their behaviour towards each other is endearing. The love is there but they annoy the absolute piss out of each other.

The opening episode is a frantic start setting up the entire season & answering a few unanswered questions from the last. We are introduced to the new enemies who are straight out of hell & no friend to the culebra. 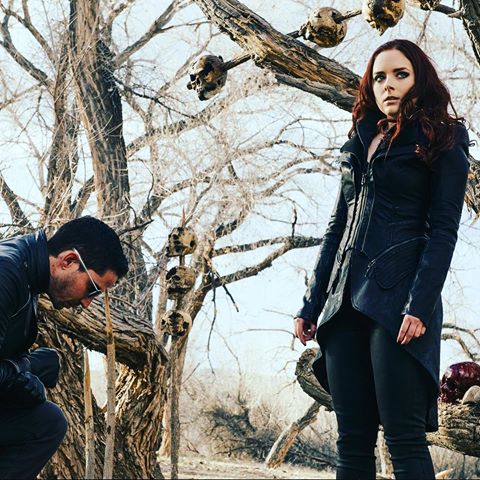 These are the most deadly things to appear in the series so far, led by a newly revived Kate (Madison Davenport) who is now inhabited by an evil once-Queen that wants to open the gates of Hell.

All but one of the lords are killed sending the rest of the culebra into chaos, feeding at will & unwilling to follow any rules (at least at first, later in show you’ll find out that there are many, many, many rules & it’s amazingly stupid). This is the end times for the race of snake-vampires, something that forces Seth into action to help his brother.

This season is approached quite differently to the last. For one it ups the action & gore, blood flies everywhere here & it’s so much better for it. The early episodes are fast-paced but not difficult to keep up with. The introduction of the demons from Hell allows the show to use it’s imagination in creating some very interesting creatures, at least at first. Some of the make-up & CGI doesn’t quite hit the mark but in a show about snake-vampires it’s hardly that big of an issue.

The first few episodes are exciting, starting a story that promises an epic finish but then it all falls apart. It becomes painfully obvious that the Queen of Hell story is all they’ve got & it’s not got enough ‘meat on the bones’ to sustain a ten episode run. The middle of the series puts that story on the back-burner & instead turns into a more adult version of Buffy the Vampire Slayer. 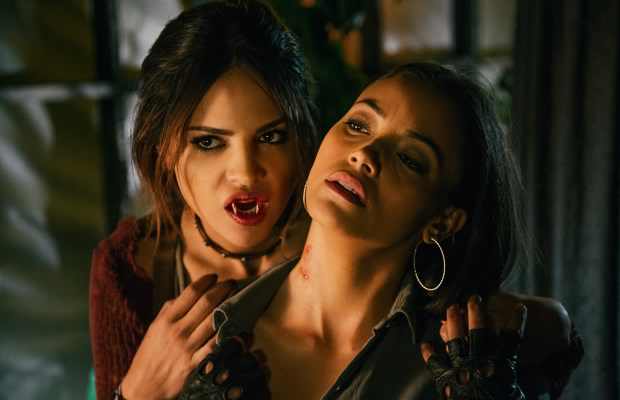 We get several episodes where a new creature is called up by the Queen & the ‘gang’ have to deal with it. Throw in the constant in-fighting, characters being possessed & the actors viably wilting under the lacklustre story & what you have is a season that somehow turns out to be almost as bad as the first. The ‘zombie’ episode was the final straw, if you don’t have a story, don’t make ten episodes!

The Peacekeeper, Freddie (Jesse Garcia) also makes his return in a role that helps develop his character a little. His marriage has fallen apart & he seems to revel in his role for once. No longer driven by vengeance he is much more likeable but that is all dropped in the middle for a pointless love story between him & one of the vampires.

Sure it makes its return near the end but by then you just won’t care. The same can be said for the brief angle of his mentor’s daughter finding out the Gecko’s are still alive. Earl McGraw was the whole reason Freddie spent the first season hunting the Gecko brothers so the introduction of his daughter (why we’ve never seen her before this says a lot about the desperate attempt to make stories in this season) should have shook things up. Instead she effectively abandons her quest for vengeance once the culebra thing is revealed.

“You killed my dad? I’ll kill you but only if you’re not a snake-vampire thing”.

Like much of the returning cast, Freddie just doesn’t have that much to do & ends up playing sidekick to Seth & Richie. Professor Aiden Tanner or Sex Machine as he’s better known (Jake Busey) is only here to spout exposition, Scott’s (Brandon Soo Hoo) inclusion is wasted, Santanico (Eiza Gonzalez) is barely in it & when Carlos makes a return near the end, it’s done in such a way that it’s clear the writers only did it because they needed someone to explain just how the Queen could be defeated. 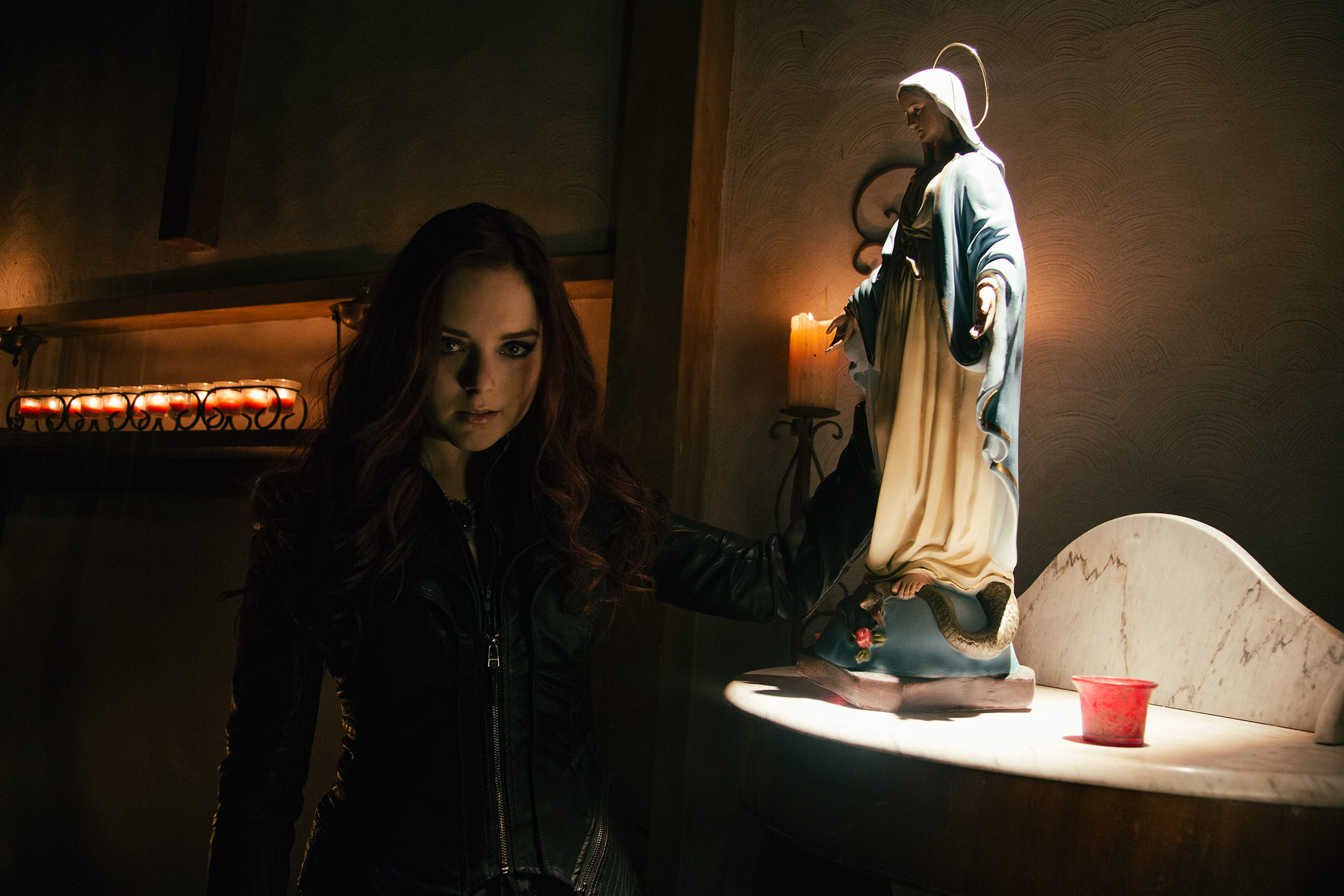 It’s utterly idiotic for them to trust him considering just what happened in the last season & like many other shows it’s clear they have a fear of killing off any major character. Every minor character that is introduced is killed very quickly but as soon as it comes to the main cast the bad-guy suddenly wants to toy with them or talk shit.

The show even begins to abandon it’s own rules regarding vampires. It’s always been an issue for me that these vamps could go out in the sun as long as they covered up but here it takes it to a new level that is gob-smackingly dumb. Richie can survive in the baking Desert sun as long as he wears a mask, forget that this mask doesn’t cover the side of his head, or parts of his neck or the back of his head…nope, it’s totally fine. 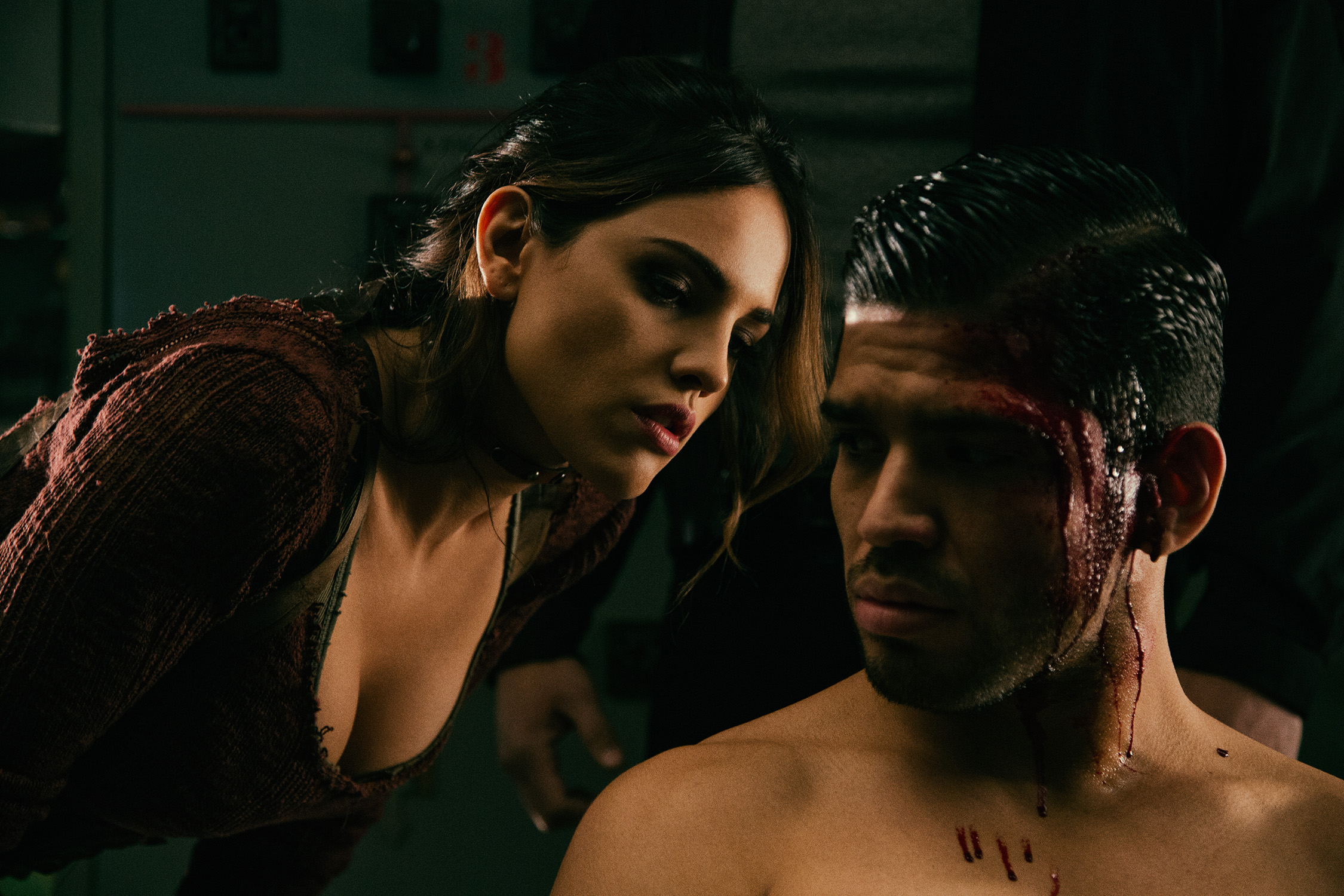 The finale is just one big disappointment as the whole gang face off against the Queen & her minions. Here again the show proves it’s too scared to kill off any of the main cast with one character making a return that is infuriatingly stupid & dents the impact of a death in the second season.

Thankfully it does wrap everything up nicely. This feels like a finale but they still leave themselves some wiggle-room with Carlos on the loose & a final scene that just didn’t need to happen.

The best thing about this season is guest star Tom Savini who you’ll remember as the original Sex Machine. Here he plays an ancient vampire that fought the Queens minions back when she was last around, he also loves to get high. He’s charming, funny & very likeable…the exact opposite of Jake Busey’s Sex Machine.

Once again the show pays homage to the original movie & other popular horrors but here they feel way less jammed in. Homages such as Richie showing fake ID to Tom Savini & the picture being Quentin Tarantino from the original film or Tom Savini calling Jake Busey stupid for calling himself Sex Machine.

However like most things in this show it takes a good thing & runs it into the ground. A fun homage to The Thing’s famous ‘blood test’ scene is utterly wasted, Seth saying to himself…get up Trinity, while lying on the floor is stupid & a late interaction between the two Sex Machines regarding the penis gun was unnecessary especially after we’d already had a better joke about the characters earlier.

What the show does have going for it though is its slick visuals. Gore is realistic & flows freely, the practical effects are great & it just bursts from the screen. 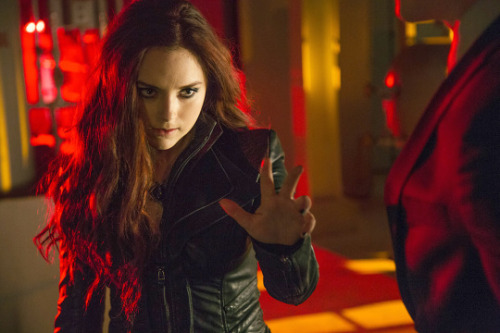 The acting though is very average but a lot of that blame has to be put on the lacklustre story. DJ Cotrona seems bored throughout, like he’s had to say the same stuff for the last three seasons & is just sick of it. Zane Holtz is far better but he gets a lot more to work with.

Madison Davenport as Kate/Queen of Hell seems to reveal in her nastier side at first but like most, ends up bogged down by a paper-thin story with little to do. Her ‘pray with me’ scene is the best stuff she’s done in all three seasons though.

So this looks to be it for From Dusk Till Dawn & I’m frankly amazed that it’s lasted this long. What we have is a decent second season book-ended by two very poor ones. Free from the constraints of the film it’s clear the writers had nothing to actually offer. Incredibly disappointing.

From Dusk Till Dawn - Season Three