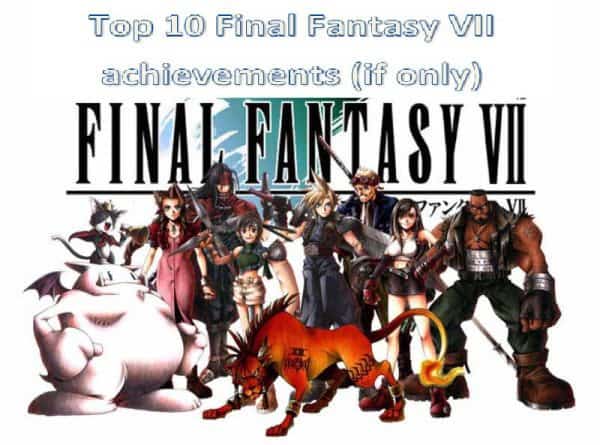 Final Fantasy VII is my favourite game, over the years I’ve played it for 100s of hours but don’t have a single achievement to prove it. One of these days I hope to get a re-release of the game on consoles but not just any re-release, one that comes with an abundance of achievements that I can spend a hundred more hours going after. Ideally I’d like there to be 50 achievements for the game so I’ve thought up 10 of them that I could easily see being included. A seriously simple one to start with, almost immediately after you jump off of the train at the Mako reactor as Cloud you’ll be ambushed by two guards and thrust into your first battle. This would most definitely be a time consuming achievement but in my experience you can easily reach level 60 before the end battle by casually playing through the game with minimal grinding.

08 – The Master Of Materia: Level up 30 different Materia to Master Level As you gain experience from battles and level up the characters, the Materia that you have equipped will gain experience and level up too. As the Materia gains levels it becomes more powerful and if it continues to level up it will hit master level. Materia can be sold at a very high price once it’s at this stage so having 30 of these in your possession would mean a lot of Gil; this ties into the next achievement.

This would definitely be a tall task and would certainly require some kind of progress tracker. Getting Materia to master level and then selling it would be a great way to make most of the Gil needed for this achievement. At least it’s not asking you to have that amount at one time! As an optional character, you’ll have to slightly go out of your way to awaken Vincent from his slumber. Getting your hands on the Zero Bahamut Materia isn’t as easy as it may appear. You must first have the two other Bahamut Materia (Bahamut & Neo Bahamut) and then you’ll need all 4 of the huge Materia which makes this a very miss able achievement. To gain the 4 huge Materia you must: stop the train from crashing into Coral, blow up the red submarine, unlock the safe in Cid’s rocket and collect one from the Fort Condor Reactor.

04 – You did everything you could: Prevent Aeris from dying in battle until…. As long as you concentrate on making sure that Aeris stays at full health then this should be very doable. Seeing as you’d have to spend an insane amount of time playing the game, leveling up characters etc to get the rest of the achievements, this may just be possible if left to last.

02 – Size Isn’t Everything: Win A Battle With Your Whole Party Transformed Into Frogs. Firstly, you must find an enemy and get them to transform each of your party into a frog and then somehow defeat them even though you do practically no damage as a frog, sounds fun eh?

01 – Materia? What Materia!? Complete Final Fantasy VII Without Ever Going Into Battle With Materia Equipped. Is it possible to complete the game without using any magic and simply using basic attacks and items? There’s only one way to find out.

So what do you think? Sound doable?