How do you expand upon a hugely popular tower defence game available on almost every gaming format currently available? Make a mainly multi-player first-person shooter! Wait, what?

Plants vs. Zombies: Garden Warfare pits you either the plant or zombie role across a number of modes throughout some inventive maps in the third-person view point. Players level up by completing character specific challenges rather then the conventional way & can unlock new weapons, styles & upgrades using coins earned through gameplay.

There are 4 playable characters on either team each with their own uses & drawbacks. The plants have pea-shooters (front-line grunts), Chompers (stealthy option), Sunflowers (healer) & the Cactus (the sniper). The zombies have the foot soldiers (grunts), Engineer (builder), Scientist (healer) & All-Star (the heavy).

Each has unique weapons & abilities that you can unlock as you level them up as well as variants that can add poison, flame or ice (plus more) abilities. There is more then enough to unlock & they manage to avoid micro-transactions by giving you more then enough coins to constantly be unlocking sticker packs for upgrades & consumables. 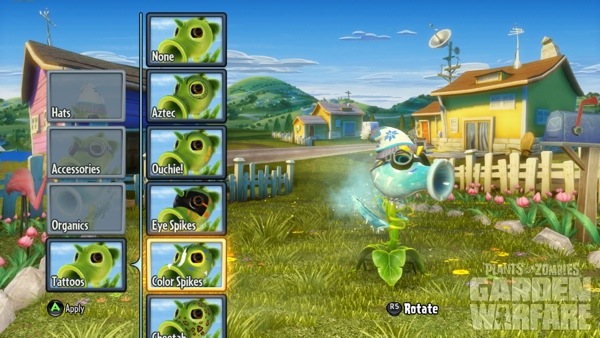 The main mode that shares the most in-common with the traditional Plants vs. Zombies gameplay is Garden Ops. This is where up to 4 players work together to defend a garden from 10 waves of zombies (AI controlled) with wave 5 & 10 being boss waves. To aid your team throughout the increasingly difficult waves you can also plant consumable plant types that you’ve unlocked from sticker packs. Its fun but the tougher difficulties are reliant on having a good team with the right classes. It’s extremely frustrating to join a game on hard & see your 3 team members are all playing as Sunflowers.

Then we have Team Vanquish which is effectively Team Deathmatch with a few variants on how it is played. There is the excellent Gardens & Graveyards that sees you capturing (as the zombies) or defending (as plants) a number of objectives. Then we have Gnome Bomb were players fight it out to secure a bomb strapped to a Gnome & set it off at various bases. Finally there is Mixed Mode which just combines Team Vanquish & Gardens & Graveyards.

There are plenty of maps to go with these modes & the day/night cycle makes a difference as well. Depending on what mode you are playing will depend on the size of the map. Gardens & Graveyards use huge maps where as the zombies you constantly push the plants further & further back. 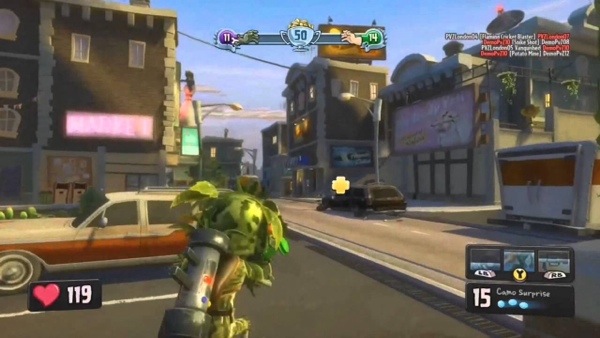 As noted above you don’t level up the conventional way (earning XP) but by completing challenges for related characters. Some generic ones will involves killing 15 enemies or planting 5 plants while other more character specific ones can include killing 2 enemies in a session with the sunflower beam or kill 5 elevated plants. They force you to vary what character you play as if you want to reach the max level & with a lot of variety in the challenges they can be a lot of fun. 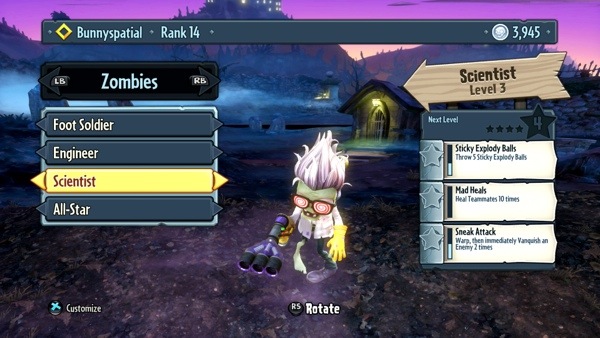 Plants vs. Zombies: Garden Warfare is a lot of fun to play. It doesn’t have a huge amount of variety in its modes but it more then makes up for that with its balanced classes & the excellent Gardens & Graveyards mode.