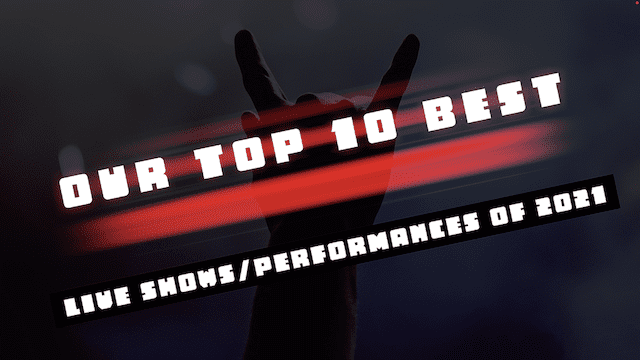 Just like the year before, 2021 was beset by cancellations and delays to many, many shows. This has meant we didn’t get to as many actual gigs as we would have liked too. However, we still managed to do a fair bit, even getting to 4 festivals throughout the year overall. We have seen some incredible bands this year and wanted to tell you about them. Below, you can read both Brendan and Carl’s top 10 live shows/performances of 2021. Enjoy. We sure did.

Funeral for A Friend delivered a class nostalgia driven show. Think of every major hit the band has and be assured they played it here. Hearing a tent full of people singing the lyrics “home, now that I’m coming home” was downright beautiful. 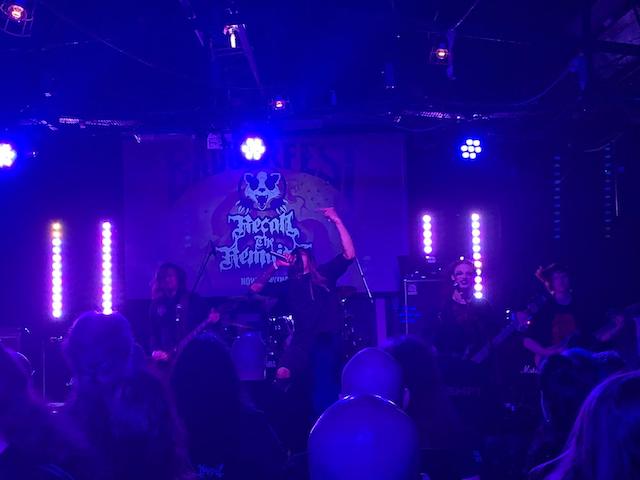 Recall the Remains were phenomenal at Badgerfest this year. Being on early, it was their job to wake the crowd up and get the floor swelling and they did just that. The energy coming from the stage crashes over you like waves and you find yourself swept up in the sounds. Despite being a few months back, I can still clearly remember their show and performance. I had a blast.

I absolutely loved this. Red Method were on top form here. The energy, the blend of meaningful melody and heaviness, I could watch and listen to this band for hours. One of the times where 30 minutes just didn’t seem enough.

I remember I went along to see the thrash icons more from a bucket list perspective as I had never seen them previously. My first thought after their set was, how have I not seen them before followed by a quick “that is how you headline”. Onslaught were amazing. Maybe I shouldn’t be surprised but wow. They sounded perfect, engaged the crowd, were funny, had the stage show and musically absolutely killed it. What a performance this was.

Ok… honesty time. I just don’t rate Kreator on record and they were not high on my ‘bands I can’t wait to see’ list. So, it being the end of the night almost and being Saturday night, so the last night I could drink (driving Sunday night) I decided to go for it. I got stupidly drunk. Embarrassingly drunk… I think. Ask my wife and son about that. However, I absolutely loved Kreator and can remember most of it. To say they shut me up was an understatement, it was a band proving that they deserved the slot they were given. 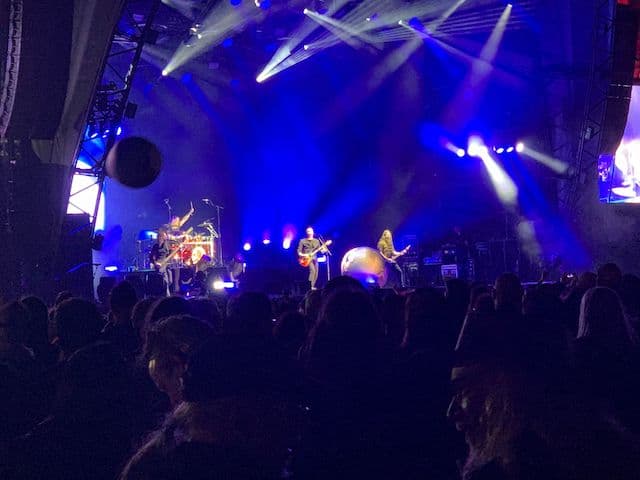 This was my very first time seeing Devin live since I became a follower around the Empath days and it was worth the wait. His smile alone warms the soul but add in the stage performance, songs like Spirits Will Collide, confetti, singing Happy Birthday to Bloodstock and of course the elephant. It was an absolutely perfect headlining performance and I feel thoroughly grateful to have been there.

With the festivals most anticipated band (for us) being pulled due to COVID, we decided to spend some time in the company of Gama Bomb on the Tone MGMT stage. A decision we were glad we made (even though we do love Svalbard) as the thrashy fun we had made it so worthwhile. Maybe the set responsible for the neck-ache that followed the next day.

Urne absolutely nailed their set. One of the highlights of the weekend were words we heard from many, onlookers, and other bands, and I fully agreed. I remember so much of the set now still, especially hearing the melody from the song Serpenet & Spirit ring out. An absolute belter of a performance cementing the thoughts that their debut album created in that Urne are really special. 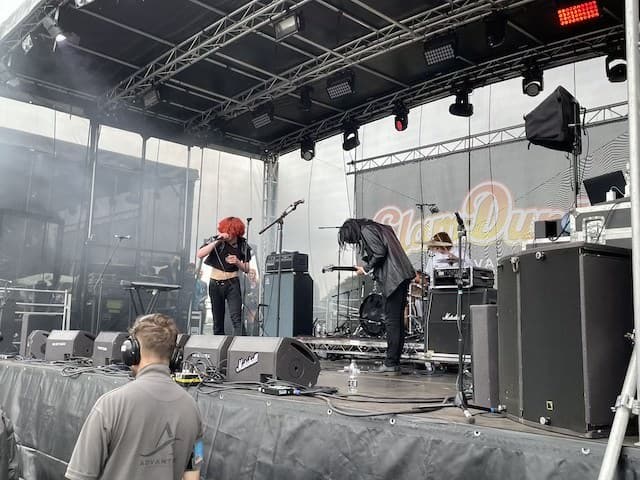 Our first proper trip to the Key Club stage saw me get up close and personal with Static Dress. A member down (no bass) and plagued by sound issues at the start, the unit quickly find their feet and smash it… literally. Chaotic and furious, energetic and fun, this is a band proving a lot of doubters wrong. The best band of the day.

I have seen Red Method a couple of times now and this performance at Badgerfest was the best I had seen them yet. They are on a small stage, packed tightly in but that doesn’t stop them throwing their all into the performance. Watching the band enjoy themselves is infectious and watching them create moments of anarchy and chaos really makes the performance. From the keyboards being thrown around the stage to the slamming head banging riffs, it was a performance that will live long in the memory.

Another where 30 minutes just wasn’t enough but what a 30-minutes it was. Ghosts of Atlantis are one of those bands that bring it regardless of if they’re playing 60 minutes, 45 minutes or 30. You’re going to get the full GOA experience and leave satisfied. I loved this and really want big things for them. With shows like this, it seems so obvious that we’re looking at greatness. 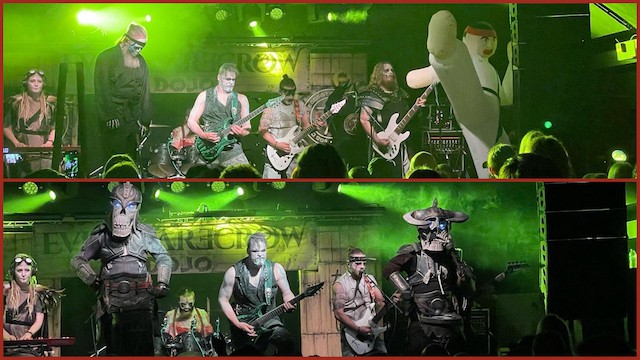 Maybe it was the much needed live show in these pandemic times, maybe it was the fact that Evil Scarecrow, no matter how many times you see them, are absolute masters of making you feel good. I genuinely think this was my favourite ever Evil Scarecrow performance. They were funny, engaging with a ridiculous stage show but behind all of that, they have a plethora of catchy, riff heavy headbangers. These guys are no joke.

The band of the day for us. Memoriam were on absolute fire here and it was an hour that flew by for us. We were enthralled by what they produced on the stage, the only distraction being the guy who knocked himself out falling down the stairs near us. Props to security and staff who were on hand so quickly and were heard since that he was fine, aside from a mild concussion.

I kept telling everyone, Kreator were going to be awesome, and they didn’t’ let me down. A band that has worked so hard over a long career took the headline slot and owned it. They were perfect and flawless with hard and heavy thrash, plenty of catchiness loads of fire, sparks, smoke, and confetti. Chuck in a special duet with Dani Filth and I left with my mind well and truly blown. I genuinely think they were the best headliner of the festival and that is saying a lot, considering we also had Priest and Devin there.

Have you even seen the episode of American Dad where Stan goes to get Hayley out of a My Morning Jacket concert? He gets into a scuffle and his ear-defenders fall out exposing him to the music. Once he hears it, he is transfixed and finds himself transported, feeling as though the band are playing to him alone. He ends up becoming a super-fan to the point where he can’t fathom the idea of listening to anything but My Morning Jacket.

Ok, the latter part is stretching it, but it’s this episode that jumped into my head as Sugar horse played Phil Spector in Hell. A simply phenomenal track that delivered an emotional, shoe-gazy experience that captivated me.

From that point on, I was sold with heavier, punchier numbers like Fat Dracula and Drugs fitting wonderfully alongside the more eclectic sounds of Richard Branson in the Sky with Diamonds and The Live Long After.

I went in knowing very little about this band and came away a fan. With one song, they made me feel and that’s a memory I’ll cherish. 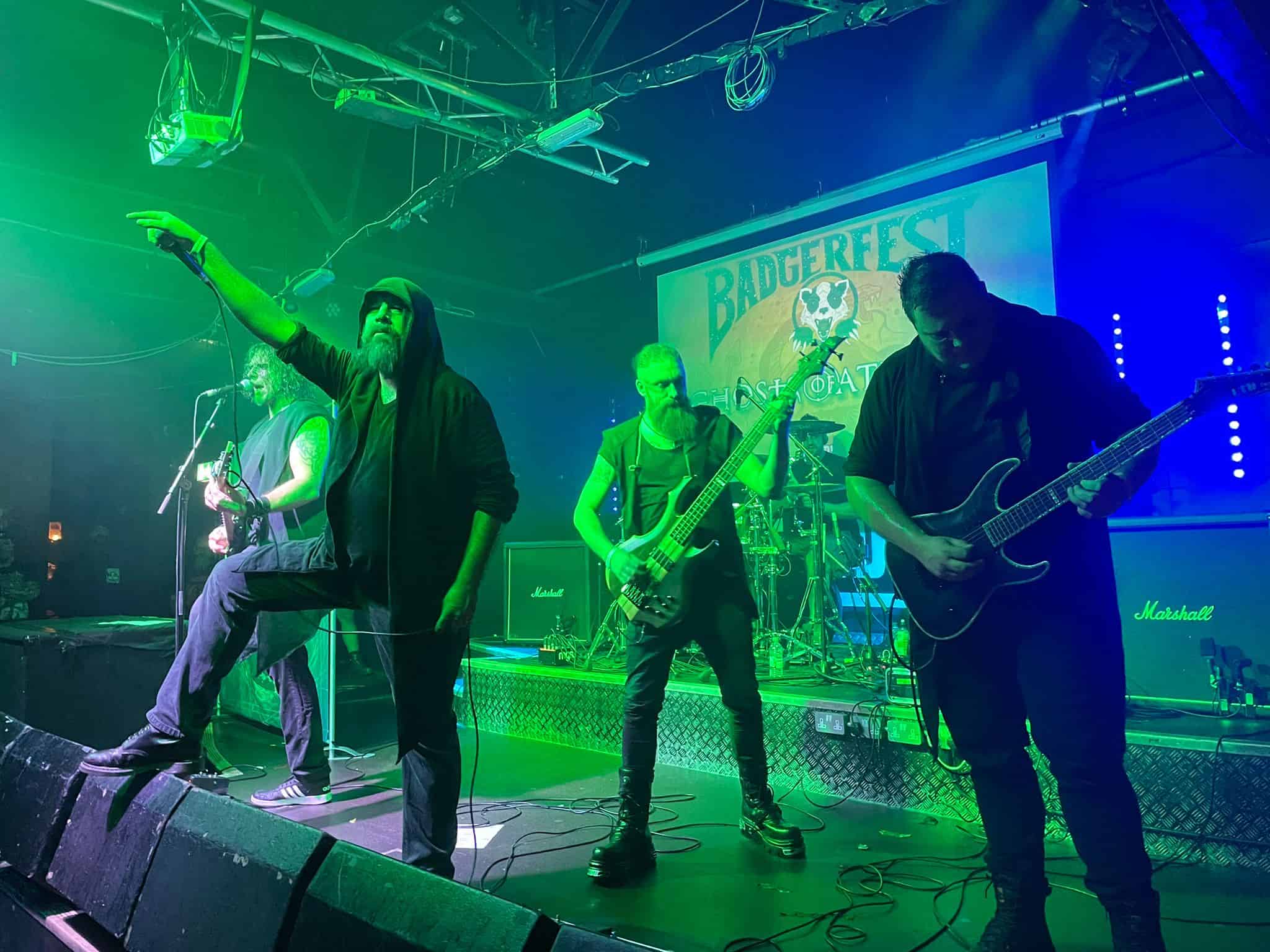 This was the second time I was lucky enough to catch Ghosts of Atlantis in this their debut year. As a huge fan of the band, the first time at Bloodstock was special but I chose this Badgerfest performance as my favourite. Bloodstock was amazing but the band were short a member and through poor announcing of stage changes, I nearly missed them. Badgerfest saw the band with a full line up and every bit as impressive musically as the first-time round. Their album sound is amazing, and they perform it live to perfection sounding and looking like a band destined for bigger stages very soon.

Evile are fucking back. I was planning to watch half of Evile then go check something else out. It was so good; I didn’t dare leave the tent. Time flew by and they gave me the ache I still feel in my neck. Wow.

Well wow. Of all the amazing bands that took to the stage at Bloodstock 2021, The Crawling stood head and shoulders above the rest (okay, well kind of joint with 1st place). The catchiness embedded in their hard hitting riffs, the vitriol in the vocals and drums that leave you shaken to the core topped off with the stagecraft and fire to make it even more memorable. I cannot say it enough and have been sure to tell everyone so, once again, The Crawling were faultless. Amazing. 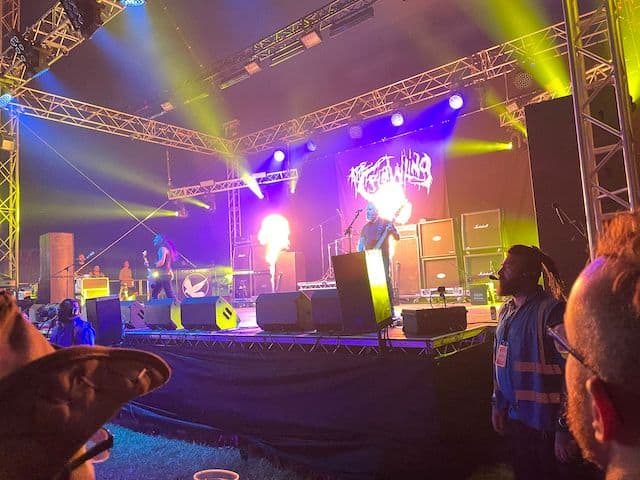 What the actual fuck? Was it stupid of me to not expect to be blown away? I know The Crawling are great, I’ve been listening to them for years but I had never seen them live. For me, the band of the entire weekend. Words can’t do this set justice and I hope the band are proud of what they accomplished on that stage. Even now, thinking back, it puts the biggest smile on my face. Transcendent stuff.

The revitalised thrashers were a band that I wanted to check out and again ended up so caught up in their set that I stayed for it all and felt dejected when it ended. Evile were nothing short of amazing. It genuinely was one of the joint best sets of the whole weekend full of amazing moments like the duet between old and new singers. The music is high energy, they sounded fantastic and the banter with the crowd was on point. Mind blowingly good and my favourite performance of 2021.