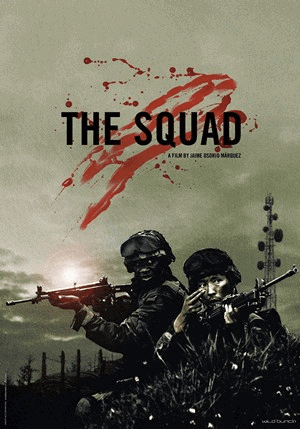 The Squad is a Columbian horror movie that sees a squadron of men sent to investigate why another unit has ceased communications at a secret mountainous base.

The group of men are an anti-guerrilla commando unit that have seen a lot of combat up to this point. An early dream sequence implies that an event took place before that may have had really hurt the squad as a unit.

The base is up a mountain that is heavily affected by the foggy conditions around it. After breaching the early warning system of the base & getting no response the Lieutenant is given orders to wait for backup at the base of the mountain. The Lieutenant is young & clearly inexperienced. His men sensing that often question his orders in particular the battle-harden Sargent.

One squad member in particular is anxious to go up to see what is going on & disobeys the command to wait. Several men follow him to try & stop him but at the top a mine is triggered badly injuring one of the pursing men. With the hurt man in tow the squad have no choice to move into the base.

The place is a cold & unwelcoming set of buildings…that would be bad enough if it wasn’t for the blood everywhere, the lack of bodies (except the radio operator who committed suicide), the store room with religious writings & charms all over the walls.

Believing the chaos to be the work of a guerrilla group the squad attempt to set up home while awaiting backup. Their radio was destroyed when the mine went off & the radio at the base has been thrashed.

As the group explore one in particular is drawn to a wall with some sort of prayer written on it. Thinking he heard something behind it he knocks on it & is shocked when he gets a reply. The rest of the squad are called & they bust down the wall to find a dishevelled woman bound & gagged.

Some of the old school squad members believe her to be the guerrilla responsible for what has taken place at the base while some of the younger group try to treat her with compassion. Against most of the squad’s wishes the Lieutenant frees her unwilling to believe that her captivity was nothing more then cruelty.

The log book is found & it suggests that she was bound & put behind the wall because she was a witch who infected the men & turned them against each other. The bodies are found in a mass grave, that night the Sargent is murdered & the woman disappears.

As morale & ill-discipline runs rife through the squad night begins to fall. Survival it seems is now the only mission…but who is the real enemy?

The Squad is a story-driven, tense & deeply emotional film that tries to show how war affects even the best of us while adding possible supernatural elements. The soldiers are quickly convinced that the woman is a witch but as the viewer you can’t help but wonder if everything is as it seems.

There is so much to love throughout…everyone does a standout job of acting with very little let-up in the intensity. The relationships feel real & you will be filled with genuine regret & sorrow when they are broken or damaged.

As a viewer you’ll feel everything that these soldiers are going through & as the reality becomes clearer you’ll realise that they are just products of a war, given orders & broken because of them.

The film makes excellent use of its setting & music with the right amount of dread & build towards some of the more terrifying moments. The film has one or two jump scares that are excellently placed, well spaced out & effective. Take note – this is how you do a jump scare!

Throughout it’s 2 hour run you’ll question the reality of what you’re seeing & as the chaos unfolds at night, you’ll wonder just how any of them can possible survive.

The film has divided opinion online with many stating it fails to deliver on its initial promises. Others, like me, see the film as a more thought-provoking horror movie. One that deals with the horrors of wartime as well as a supernatural threat.