If it’s in a word or in a book…you can’t get rid of the Babadook.

Possible one of the best horror movies to be released this year, The Babadook stays with you afterwards & has you replaying scenes & questioning just exactly what you saw…

Watch carefully & decide for yourself.

Amelia has been raising her son alone since the premature death of her husband who was killed in a car crash on the way to the hospital for Amelia to give birth. That was 6 years ago & the care her son needs is beginning to take its toll on Amelia. You see Samuel has an over-active imagination…doing magic tricks & making weapons to fight monsters that he claims to see. 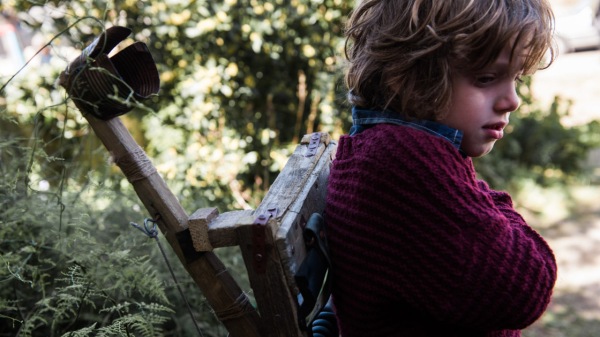 Unable to get a good night’s sleep or any time to herself, Amelia is seriously stressed & Samuel’s behaviour problems see him being taken out of school temporarily. One night while putting him to bed Samuel asks her to read from a storybook on his shelf. Mr Babadook… 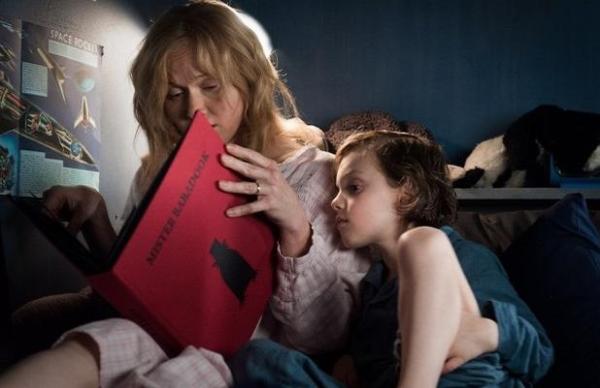 Amelia has never seen the book before but reads from it anyway…it’s a nursery rhyme of something coming to your home one night, knocking 3 times & wanting in…as the book goes on it gets more & more sinister causing Samuel to freak out & Amelia to question how it got there.

Over the next few days Samuel becomes convinced Mr Babadook is a real thing stalking his mother but is disbelieved thanks to his well-known over-active imagination…even when strange occurrences happen Samuel is blamed. That is until Amelia destroys the book only to find it turn back up on her doorstep & takes a phone call with a voice saying “Ba-ba-ba dook dook dook”.

Stressed to the point of having a breakdown, shunned by her sister & feeling completely alone Amelia has no-one to turn too & the knocking just won’t stop.

Is The Babadook real & what does it want?

Yeah, it is that impressive….

The Babadook manages to do the impossible…be scary with next to no jump scare moments. It creates an absolutely wonderful atmosphere & you feel Amelia’s stress. Seriously, after the first 45 minutes I wanted to punch her kid in the face just for not letting her get a good night sleep!

These 2, Amelia & Samuel, are so well-acted & fully-fleshed out characters that you care about what happens at the end. I can’t praise them both enough & it must have been such hard work to do some of the more intense scenes near the end.

Praise has to go for the idea of The Babadook as well…it is a scary thing & manages to never become laughable (low-budget) thanks to it mostly being kept in the shadows. In fact you rarely see it & that just adds to the atmosphere…the first time you here that “ba-ba-ba dook dook dook”, you will feel a chill. 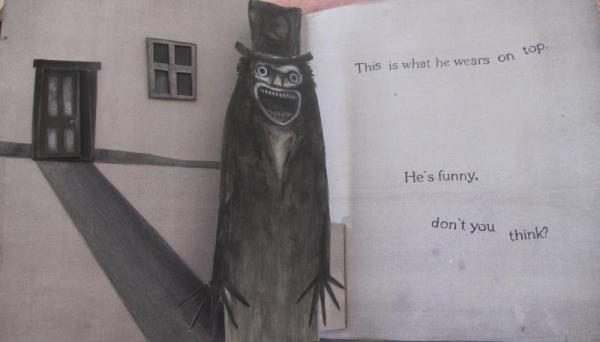 I’m avoiding as many spoilers as I can because this movie is all about the surprise. There is a lot going on & pay attention as clues are dotted all along that might make you think twice about just what is actually going on.

That the best horror movie of 2014 so far comes from a Kick-starter Australian company doesn’t surprise me. Hollywood has a lot to learn about how to make good horror movies that stay with you.

See The Babadook…it drags a little in the final third but it’s a minor complaint about a horror movie that even does the cliché ‘no-one believes the kid’ thing better then I’ve seen in years.

I’m thinking about doing the Babadook as a costume for a Halloween party next year!

Low budget but never manages to feel like it is. Incredibly acted with some of the more sinister segments sticking with you for days afterwards. It is a wonderful surprise to see a horror movie remembering just what should be scary…no jump scares, all tension & intrigue.