When you think about Clown related horror what jumps into your head? For most people it will be Stephen King’s It & Pennywise the Dancing Clown. Still one of the most terrifying portrayals in horror to date (the less said about the ending, the better). For those who delve a little deep, films like Clown House & Killjoy might jump to mind.

There have been more than you think over the years, preying on humanity’s natural fear of those that always seem to be laughing even though the joke is on you.

Most clown horror prefers to go down the tongue in cheek route, clowns are funny, they make people laugh so couldn’t possibly be harbouring sinister thoughts. Klown Kamp Massacre continues this trend by attempting to be as funny as possible while remaining a dark & gory horror.

Opening found-footage style (my heart sunk) we see the recordings of Edwin, a fledging clown who has been attending clown camp. It’s been his dream to bring laughter to the world but has struggled to take to clowning. A last ditch attempt to impressive his peers goes wrong & he is humiliated causing him to snap & go on a brutal killing spree.

The opening footage is pretty graphic stuff as Edwin talks to the camera as if he was talking to his mother (who supported his dreams) while showing of the carnage he has caused.

Edwin disappeared after the murders & is presumed dead…15 years later the famous TV clown Bonzo has decided to reopen the camp & start training new clowns. Edwin, watching on TV sees this & is incensed so sets off to continue his killing spree. 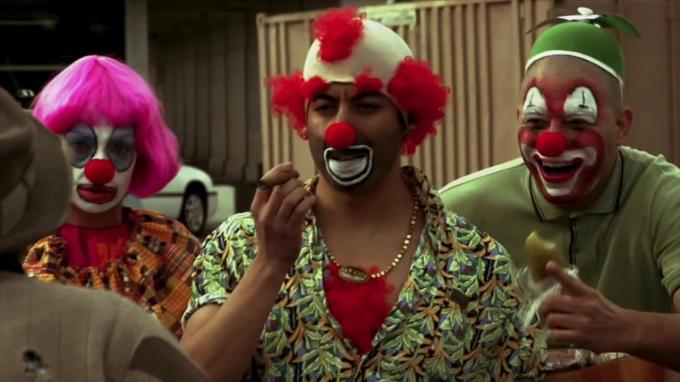 Klown Kamp Massacre is part gory horror, part comedy & part parody (Friday the 13th in particular with some not so clever jokes about Jason). It does deliver a wholly entertaining slasher flick that is one of the better modern day clown related horrors. The cast are strong throughout & that everyone stays in their clown make-up throughout no matter what they are doing (even during sex) just adds to the silly vibe.

The tongue in cheek approach means that the uber-violence can be quite shocking when it arrives. Moments of parody & amusement are quickly forgotten as someone is decapitated by the vengeful Edwin or has their face melted off by sulphuric acid. The blood flows & the effects are really good for such a low budget film.

The films pacing ensures boredom never sets in & it keeps Edwin a mystery until the ending, giving you no insight into how you looks after all his time hidden away. It’s even possible to have a degree of sympathy for him as his dreams were smashed so cruelly.

A tense finale sets up a twist ending that I can admit I never saw coming. It’s absurd & a rip-off of a much better horror (April Fool’s Day) but it works in the context of such a wacky movie.

If you like clowns check this film out, you’ll be thoroughly entertained. If you don’t…well check it out to see a lot of clowns getting gutted & dismembered!