“I’m flesh and blood, but not human. I haven’t been human for two hundred years.”

Louis begins by describing his transformation into a vampire in Spanish Louisiana in 1791, at age 24, by the vampire Lestat de Lioncourt. Louis suffered from a death wish following the deaths of his wife and child; Lestat offered Louis the death he craved, but Louis asks to live instead. Lestat turns Louis and teaches him how to live as a vampire. As part of his education, Lestat informs Louis that some vampires, as an extension of the ‘Dark Gift’ of vampirism, can develop the capacity to read the thoughts of others. At first, Louis rebels against hurting humans, drinking animal blood instead. He finally succumbs and kills his faithful house slave Yvette. Guilt ridden, he tries to kill himself by setting fire to his house; but Lestat rescues him and they flee.

Wandering the streets of New Orleans, amidst an outbreak of plague, Louis finds a sick child in a house with her dead mother. He bites the girl, Claudia, whom Lestat later transforms into a vampire “daughter,” to discourage Louis from leaving him. Lestat teaches Claudia to live as a vampire and prey on humans. As thirty years pass, Claudia becomes a sadistic killer and closely bonded to Louis and Lestat. But, when she realizes she will never grow up, she is furious with Lestat. She tricks him into drinking the blood of twin boys she killed by overdosing them with laudanum, knowing that blood from a corpse is fatal to vampires. This weakens him, and she slits his throat. Claudia and Louis dump Lestat’s body in a swamp; but he returns, having drained the blood of swamp creatures to survive. Lestat attacks them, but Louis sets him on fire and is able to flee to Paris with Claudia. 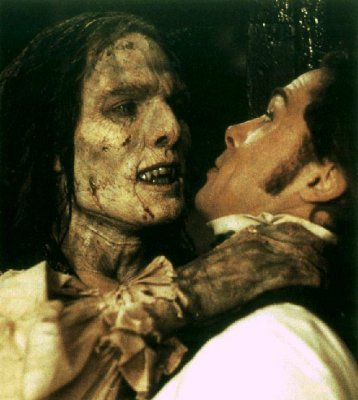 In 1870, Louis and Claudia live in harmony in Paris, but Louis is still bothered by the question of how vampires came to be and if there are any others. One night, Louis encounter vampires Santiago and Armand; Armand invites Louis and Claudia to his coven, the Théâtre des Vampires, where they witness Armand and his coven dispatching a terrified human woman before an unsuspecting human audience. Louis makes inquiries about vampires and their origins, of which Armand is mostly evasive in his answers. Santiago, having read Louis’ thoughts about Lestat, warns them that the only crime a vampire can commit is killing another vampire.

Claudia rightly accuses Louis of wanting to leave her and join Armand. She demands he turn a human woman, Madeleine, to be her new protector, and he reluctantly complies, feeling he has sacrificed the last of his humanity. As punishment for Lestat’s murder, the Parisian vampires abduct all three; they imprison Louis in a metal coffin. When freed by Armand the next night, he learns Claudia and Madeleine have been turned to ash by the sun, having been trapped in an airshaft by the coven. He returns to the Theatre and avenges Claudia and Madeleine by burning the vampires in their theatre as they sleep and bisecting Santiago with a scythe. Armand arrives in time to help him escape and once again offers him a place by Armand’s side. Louis once again refuses, knowing that Armand choreographed Claudia’s demise to have Louis all to himself, and he leaves Armand for good.

As decades pass, Louis explores the world alone, still grieving for Claudia, before returning to the United States. He is seen and heard telling how he saw “the sun rise for the first time in 200 years,” in a movie theatre, watching Sunrise: A Song of Two Humans, Nosferatu, Gone with the Wind, and Superman. In 1988, he returns to New Orleans and finds Lestat, a mere shadow of his former self. Lestat asks Louis to rejoin him, but Louis rejects him and leaves.

At this point, Louis concludes the interview, claiming that his experiences have resulted in his becoming the “very spirit of preternatural flesh; detached, unchangeable, empty.” Molloy is shocked by this statement and openly declares his desire to have had Louis’ experiences as a vampire. He asks Louis to transform him. Louis is immediately outraged by Molloy’s complete disregard for the pervasive suffering caused by vampirism outlined in the interview. Louis bodily lifts Molloy up and pins him against the ceiling. In the next instant, Louis vanishes.

Molloy hurriedly runs to his car and drives away, feeling happy with his interview as he plays it through the cassette player. Just then, Lestat appears and it’s strongly hinted that he strangely seems to know everything that went on between Louis and Daniel. Lestat then attacks him and takes control of the car. Revived by Molloy’s blood, he then offers a dying Molloy “the choice he never had”.

I’m ever so slightly biased about this film because it’s one of my favourites. I find it incredibly hard to give anything a 10/10 but for this film, it’s incredibly easy for me to do. There’s simply nothing about it I dislike. Not only is it fascinating to watch their lives across the centuries, but the characters are just so interesting to me. The concept of Louis’ dark gift being his compassion for human life is incredibly sad and makes him extremely special because no other vampire retains that after they’re changed. Then, there’s Lestat who on the contrary is a ruthless killer and enjoys every second; his personality is satisfying because he’s everything a vampire should be. Finally, Claudia suffers a more unique fate, as she’s stuck as an immortal child and will never grow up – how a person could deal with that is unimaginable. Additionally, their opinions on being changed into vampires are all different. For example, Louis sees it as a bestowal of a curse, whereas Lestat sees it indifferently as a gift he can freely give. The entire story has a beautiful sadness and elegance to it, and is extremely quotable.

Interview With The Vampire