“Now, you watch old Willie and see how the job gets done.”

While awaiting his execution for murder and grave robbery, Arthur Blake (Dominic Monaghan) is visited by Father Duffy (Ron Perlman), who wishes to obtain a statement from the condemned to be used as a cautionary tale. Arthur denies that he is a murderer, a crime for which his former partner, Willie Grimes (Larry Fessenden), has already been executed by guillotine. However, Blake freely admits to being a grave robber, and begins to recount his career with Willie. 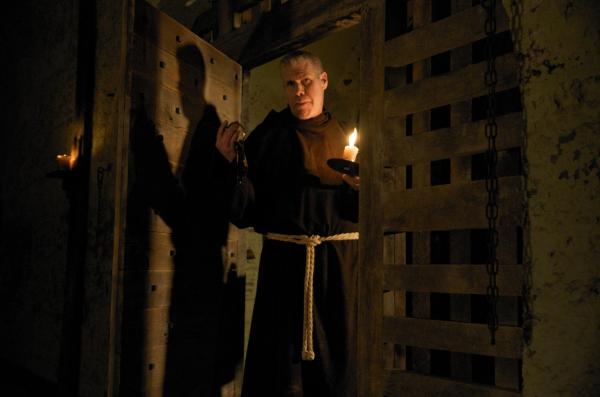 Arthur became Willie’s apprentice following the death of Blake’s father, forcing the young man to find a job to support his family. Willie quickly taught him the skills necessary to steal corpses, both from graves as well as more risky locations, such as wakes. The job proved profitable on its face, but both Arthur and Willie’s ability to make money was severely hampered by the interference of Doctor Quint (Angus Scrimm), who frequently blackmailed the two into obtaining corpses for free under threat of notifying the police of their activities. This blackmail continued for numerous years.

Willie and Arthur’s career changed abruptly when procuring another corpse for Quint. Digging up a corpse buried at a cross-roads, the two were confused when they found a garlic wreath around the body’s neck and a wooden stake in its chest. Arthur dismissed these things as superstition, and removed them against Willie’s protests. Moments later, while the two were clearing their cart, the dead woman rose and walked away. Willie and Arthur attempted to flee, but came across the undead woman, who attacked Arthur. Willie was able to fend her off briefly with a shovel, and when she attacked him he managed to plunge the stake back into her chest, causing her to go immediately limp. Willie and Arthur delivered the staked body to Doctor Quint and departed quickly. The doctor removed the stake, awakening the undead woman, who killed him.

Freed of their blackmailer and now aware of a new market for their skills, Arthur and Willie shifted their career towards the supernatural side of grave robbing. During one such job (retrieving a body resembling a Grey alien) they were stopped by Cornelius Murphy, main spokesperson for the House Murphy, an infamous and vicious band of grave robbers led by Cornelius’ unseen father, Samuel. Cornelius demanded the body at knifepoint; though Willie advised him to cooperate, Arthur refused, and the three scuffled over the body until it vanished in a burst of light.

At this point in Arthur’s narrative Father Duffy asks him if he had any further encounters with the House Murphy. Arthur is reluctant to speak of the matter, but finally relents, discussing the next—and last—time he encountered the Murphys.

Drinking at a local pub with their new apprentice (and Arthur’s girlfriend) Fanny, Arthur and Willie received word from pub owner Ronnie about a possible job: a local mortuary had been reported as receiving crated shipments of the undead. However, their most recent shipment was incomplete, two of the crates lost in a shipwreck and believed to be located on a nearby island. The catch was that the mortuary had already hired someone to retrieve the missing undead: House Murphy. Willie and Arthur initially turned down the job, not wishing to cross paths with the Murphys, but at Fanny’s insistence the two reluctantly agreed.

On the island the crates are guarded by Bulger, House Murphy’s enforcer. Fanny slit his throat (to Arthur and Willie’s surprise), then the three rounded up one of the undead, Willie suffering a bite during the effort. Before they could get to the second Fanny was killed by a knife thrown by Cornelius, who then tied the remaining two to the cage containing the captured undead. The two were only saved from death when the captured undead tore free of its cage and attacked Valentine, House Murphy’s disfigured female assassin. Cornelius attempted to save Valentine, only to be attacked by the second undead. Willie and Arthur freed themselves, then escaped in the confusion. Afterward the two argued bitterly over the botched job, resulting in the end of their partnership, and friendship. A week later the two were arrested.

At the conclusion of the tale Father Duffy asks whether it was Arthur or Willie who murdered Cornelius, but Arthur reiterates that the two simply left him to his fate. When Father Duffy expresses a surprising amount of anger at this, as well as the sentiment that Willie was “lucky” to have been killed before Duffy could meet him, Arthur realizes the priest’s true identity.

What’s the true identity of the priest? Will Arthur be executed? Watch to find out 🙂

A wickedly morbid story it is, as the team encounters cadaver-hungry doctors, vicious rival corpse-snatchers and all manner of deceased creatures who refuse to stay dead. The film isn’t a true chiller, but a black comedy that’s helped by Arthur (Dominic Monaghan) and Willie’s (Larry Fessenden) chemistry and relationship. A movie that gets much better the more you watch and has a surprisingly happy ending. The budget was clearly minuscule but with timely comedy and decent make-up, you’re able to ignore it and just enjoy watching. The rating I’ve given it isn’t particularly high simply because although there’s nothing too bad about this film, there’s nothing too spectacular either, it’s all in all an average b-movie (but what’s so wrong with that?).

I Sell The Dead