A movie like Don’t Look Know couldn’t be made in modern times…it would be called to confusing or worse, boring. Years & years of in your face, make you jump horror has dulled the senses to such an extent that a slow tense build/big payoff just isn’t popular.

It’s not something that I particularly like & it means we get very few mainstream horror movies that offer anything fresh (The latest big release is The Purge 2 *sigh*) so I have to look backwards.

Starring Donald Sutherland as John Baxter & Julie Christie as Laura Baxter, Don’t Look Now sees the married couple relaxing at home. Their 2 children are playing outside when an accident occurs & their daughter ends up in the nearby lake. She drowns & we left with the haunting scene of John gripping her tightly in the lake, distraught.

Sometime later, John & Laura are in Venice where he is renovating a church. Their relationship has been wounded by the death of their daughter but they both clearly still love each other. Over dinner one day Laura meets 2 sisters, one of which claims to be psychic. She assures Laura that her daughter is happy. Laura tells John who doesn’t believe a word of it. 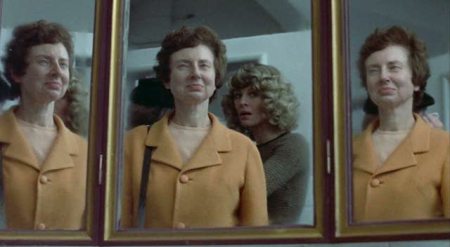 The psychic message gives Laura a renewed vigour something that even John can appreciate. As bodies begin to pile up from a serial killer stalking the streets John begins to see a small figure wearing a red jacket that looks eerily similar to his dead daughter running down alleys.

Laura continues to visit the physic sister hoping to find out more about her daughters spirit but there is a dire warning for her & John amongst the messages that may not be realised until it is too late. 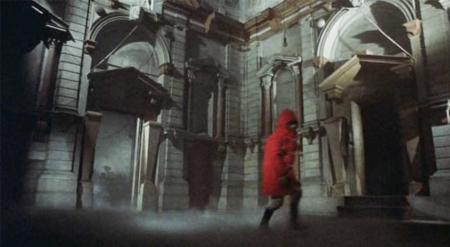 Don’t Look Now is a psychological horror, it gets under your skin & keeps you guessing all the way to the twist ending. The story is thrilling & backed up with amazing acting & a sinister score. Donald Sutherland & Julie Christie are hugely impressive & extremely convincing. The infamous sex scene should be uncomfortable to watch but is actually fascinating as it is cut with images of the couple separately dressing to show how distant they have become.

So much of Don’t Look Know is based around how it is filmed, it can leave you confused at times almost as if you’re watching 2 different timelines but it all makes sense at the end.

Venice is an amazing setting showcasing its beauty at times but also the ugly side. The city of romance with a killer on the loose, it often comes across a cold & unwelcoming place. This is a Venice that you won’t want to visit…

One of the most exciting horror movies I’ve ever seen. Filmed in a unique way that is fascinating to watch albeit confusing at times it does lead to a payoff that doesn’t disappoint. Great actors with a haunting score that fits every scene you wouldn’t be able to pull away from the screen.