I imagine this is a conversation that took place between the director & the studio regarding the actual Children of the Corn connections in this straight to DVD movie.

“Do we have he who walks behind the rows mentioned?”
“Yep, it’s name dropped at least once”
“What about corn…is there corn?”
“Well, kind of…it’s implied & there are a few creepy corn-like dolls”
“What about kids being creepy? Or killing someone while looking distant?”
“Now that we have going on…err, sort of”

“Good enough for me…we’ll call it Children of the Corn 8: The Corn got Cornier…actually, no that’s shit. Let’s call it something nondescript, something that implies excitement but doesn’t make a lot of sense once viewed”

“How about Children of the Corn 8: Genesis?”

So here we are…Children of the Corn 8, the last of the series to be made to date (seriously, it’s for the best). No part of me expected anything but the usual dross but it turned out that this is not the worst Children of the Corn movie you’ll ever see.

That should be put on the box art…. ‘not the worst Children of the Corn movie ever’.

The movie opens in a little area near Gatlin (the site of the original film) where a man is returning from war-time. He enters his family’s house & finds it in disarray. Looking around he discovers the bodies of his family strung up with corn sheaths stuffed in their mouths & eyes. It’s nice & gruesome looking.

Hearing the potential culprit, he pulls his gun & follows the sounds finding his little sister going all ‘J-horror’ on him. She stabs him in the chest & forces him to fall out the window. Lying hurt on the ground he is surrounded by lots of kids all with their angry faces on. It’s fairly impactful even if it makes little sense.

So back to modern time, Tim & Allie are in the same situation many have been in these movies. They’ve broken down on the highway in corn-country.

The married couple decide to hike to a nearby house to see if there is a phone they can use. This segment is set up to ensure we, the viewer, know she is pregnant. The only way it could be more obvious is if she was wearing a flashing t-shirt with an arrow pointing to her stomach saying ‘baby inside’.

The house they get to is a rundown, creepy looking place & is answered by an un-friendly man who refuses to help them. Allie decides to get mean with him & he suddenly changes his mind, oh & his name is Preacher, alarm bells should have started ringing by now…

Inside Tim calls for a pick-up truck while Preachers Ukrainian bride tries to seduce him in an incredibly awkward scene. Allie tries to spark up a conversation with Preacher who mostly ignores her & plays with a straw doll.

As luck would have it there isn’t going to be a pick-up anytime soon but Preacher has a delivery in the morning. He will talk to the driver & get him to take them into town, oh & they can stay the night as well, just don’t go anywhere they’re not invited too.

So guess what happens? As the night goes on Allie has to go to the outhouse, which she does, peacefully. Rather than just going back to the bed she decides to go wandering into places she wasn’t invited.

She thinks she hears the cries of a young boy locked up in a shed & tells Tim. Together they set about trying to find out what is actually going on here all the while avoiding Preacher & his wife.

The boy is the current personification of he who walks behind the rows & it is looking for more children (I think) such as Allie’s unborn child. Preacher is the leader of a corn-cult & his wife is the mother of the boy in the shed.

It makes little sense & I had to spend far too long piecing the story together. The problem was that I was trying to link it with other Children of the Corn movies & that is impossible. There is nothing beyond the odd reference & the story of this one contradicts stories that have come before in other COTC movies. Once you dismiss all notions of a Children of the Corn movie it becomes a much more sensible film & a much more enjoyable movie. 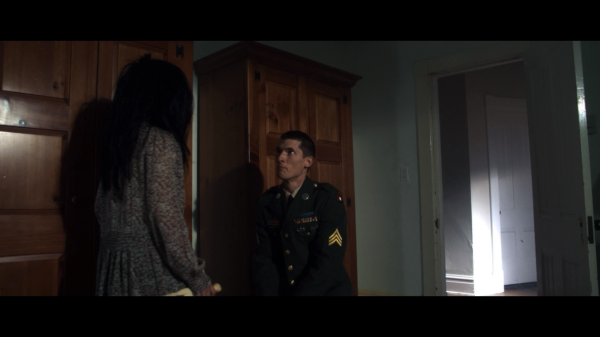 It has pretty decent acting throughout & the main characters are likeable enough even if they behave far too stupidly to survive in a horror movie. Preacher comes across intimidating at times, lazy at others.

Beyond that, not a lot happens & the ending is abrupt.

A strange film in that it’s not a bad movie or a bad Children of the Corn movie but it misses the mark in several key areas such as a confusing story & stupid character decisions.

It adds nothing to the lore & it’s hard to see what kind of sequel could possibly follow it.

Children of the Corn: (VIII) Genesis