Clive Barker’s Books of Blood are six volumes of short stories framed by a prologue called ‘Book of Blood’ and an epilogue called ‘On Jerusalem Street (a postscript)’. The two stories put together come to 15 pages, a 15-page story turned into 96 minute long film. Right…

The movie opens showing a horribly disfigured man eating in a café somewhere. He is clearly in a lot of pain as his wounds continue to bleed but he refuses any help. His efforts to keep himself unnoticed don’t work though as a mysterious man is watching him from a few tables away.

The disfigured man is Simon & as he gets up to leave he collapses into the arms of the waiting man who offers his help. Simon wakes up later tied to a table, a prisoner to Wyburd, the man from the café. It seems as though he has been hired to collect Simon’s skin, just another job for a sociopath like him. However seeing the mess that is Simon’s skin with carved writing all over it, Wyburd offers Simon a deal…he’ll make his death quick if Simon will tell him the story of how his body came to be a book of blood. 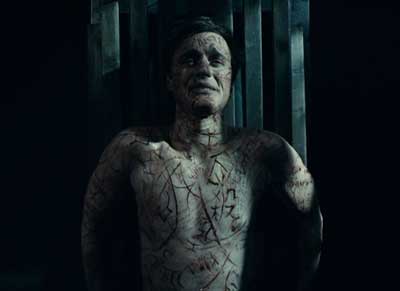 Sometime before in a house we see a young girl violently attacked by unseen forces, she is beaten & raped before having her face ripped off. It’s very graphic and very cool.

A few months later a professor in the paranormal is investigating the house to try and uncover what may have taken place inside. Mary, along with her partner Reg meet Simon, a young student who appears to be clairvoyant. Seeing that he would be useful in unlocking any potential dark secrets within the house they get him on board & the trio move in.

It doesn’t take long before strange occurances begin. Mary begins to have dreams of being seduced by Simon, something that excites her and leads her to eventually having sex with him. One night Simon is violently attacked while sleeping & threatening messages are scrawled across all areas of the room. Reg suspects that Simon may have had a hand in it but Mary is convinced Simon’s early life clairvoyance is what is drawing the dead to him.

That is until things take a serious turn for the worst with the house being revealed as a crossroads of the dead. You see the dead have highways & every so often there are intersections, this house is once such intersection. The dead want their stories told & they plan to use Simon’s skin as their book.

You see that is why Book of Blood works so well as a short story. It’s not got a lot to say but what it’s tale creates wonderfully dark imagery that is both fascinating & terrifying in equal amounts. Turning this story into a film was never going to be a good idea & it fails because of the length, it’s dragged out to such an extent that staying awake throughout is a battle.

Book of Blood has a minimal cast and they needed to be up to the task of carrying the film but they just can’t manage it. Jonas Armstrong who plays Simon in particular is pretty bad delivering every line with the same sour look on his face only delivering emotion he is in pain. His seduction of Mary is so awkward & the incredulous look on her face matched my own.

The dour & dark way in which it is filmed does match the mood of the story which I quite liked & the film is exceptionally bloody at times. The CGI isn’t so good but I liked how the ghosts looked at the end of the movie. It’s just so difficult to give a shit about anything that is happening by that point though. 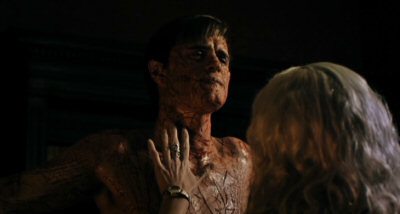 This could have been a great Clive Barker adaption had they shortened it by at least half an hour. That being said it does have a few redeeming moments and it’s very graphic at times.