It’s always nice to be surprised by a found-footage horror which is exactly what Hide the Monster does. It surprises by being competently made, well-acted and with a creepy scene or two.

Dressed up as unsolved police case footage that has been stolen by hackers and leaked online, Hide the Monster was written and directed by Gabe Saenz.

Thomas (Gabe Saenz) gets a call from a friend named Stephanie (Michelle Hurst). She is concerned about her young son, Isaiah (Owen Hurst). The boy has become withdrawn and cold to her. Locking himself away in the attic for hours on end and causing problems at school.

Thomas, who is working on his PhD, agrees to try and help her get through to the child. While it’s never explained what his PhD is in, the sensible presumption is that it’s in the field of child psychology.

Thomas then gets his friend Alex (Kyle Roark) to help. On the condition that Alex be allowed to film the sessions with Isaiah. That’s how we get our found footage.

Now you might be thinking it’s a bit of a stretch for these two characters to do this and the mother to allow it. However, it’s all actually well explained. Thomas agreed to help Stephanie because he is attracted to her and hopes to take their relationship in a different direction. Alex needs the extra credit for his film school project and Stephanie is a working single mother. She needs the help as she can’t be there for Isaiah all the time.

Sensible and all understandable. 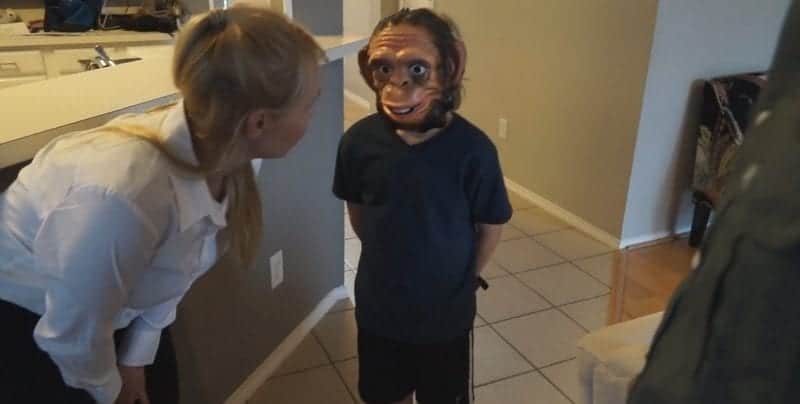 When Thomas and Alex meet Isaiah, they find a quiet and reserved boy. One who likes to hide behind masks and obsesses over a deck of Tarot cards. They discover that his father left in the middle of the night after a huge fight with Stephanie and suspect that this related to the boy’s problems.

Over the next few days they work with Isaiah. Getting him to come out of his shell by talking to him through a walkie-talkie. However, they begin to notice unusual things about him. Such as his ability to pretty much disappear during a game of ‘hide and seek’ he calls ‘hide the monster’.

As things get stranger and stranger, they uncover more and more about the boy’s relationship with his father leading to a terrifying reveal.

A really strong effort from Gabe Saenz. As well as being a good actor he also avoids the over-use of found footage tropes that often frustrate in this sub-genre. Yes, it’s mostly filmed on a handheld camera but with cuts to static cameras, police station footage and more we get a variety of shots that help break it up. The same goes for overly shaky camera work and static. It’s at a minimum here so never a problem.

If you have a deep-seeded hatred for found-footage, you’re not going to be won over by this movie. However, it’s way more bearable then most. Especially as it is often used to great effect for some decent jump scares and creep-building moments.

The big flaw in Hide the Monster is the story really. It’s nothing we’ve not seen before and you can’t help but wonder if you showed it to someone who didn’t really watch horror, they would be likely to think it was another Paranormal Activity movie. While it doesn’t go in the direction you’d expect at the end, that isn’t actually a good thing. The finale is weak and leaves you with far more questions than answers.

Overall though, Hide the Monster is a good horror flick. Certainly one of the better found-footage movies to come out in some time.