Frank Bannister (Fox) is a paranormal investigator/ghost buster in the small town of Fairwater & business is good. This is because, following an accident that took the life of his wife, Frank can actually see & talk to the dead. This ability sees him work with three particular ghosts who go to people’s houses & haunt it. Frank is then called in to ‘exorcise’ the house collecting a handsome fee for his services.

Unsurprisingly most people in the town consider him a fraud including Ray Lynskey (Peter Dobson). However, that night Ray’s house comes under attack from ghosts prompting his wife, Lucy (Trini Alvarado) to call in Frank. Of course, the house is being haunted by Frank’s ghostly buddies so Frank follows his script until Ray finally has enough & kicks him out.

It’s while leaving that Frank sees something he didn’t expect…a ghostly number on Ray’s forehead. It disturbs him & his ghostly pals have no idea about it. When Ray ends up dying shortly afterwards of a massive heart attack Frank comes under suspicion as he was the last person to see him alive. Not helped that he remains a prime suspect for the death of his wife.

You see, Fairwater is a town of death. 30 years previously Johnny Bartlett (Jake Busey), a psychiatric hospital orderly killed twelve people & carved a number in their foreheads. Why? He wanted to be a more prolific serial killer then the likes of Charles Starkweather. Bartlett was executed but his young girlfriend wasn’t. Patricia Bradley, who was accused as his accomplice, escaped the death penalty due to her age. She has remained at her family home ever since.

Surely the appearance of ghostly numbers in people’s foreheads just before they die is just a coincidence, right? Proving that Johnny Bartlett has come back is the only way for Frank to prove his innocence & alongside Lucy, who believes in him wholeheartedly, he will have to face off against death.

As you can tell, the plot is pretty full on. There is a lot of information to be told in The Frighteners with several plot threads playing out at the same time. Happily, though it never gets confusing or frustrating, instead flowing nicely towards a finale that ties up all the loose ends. 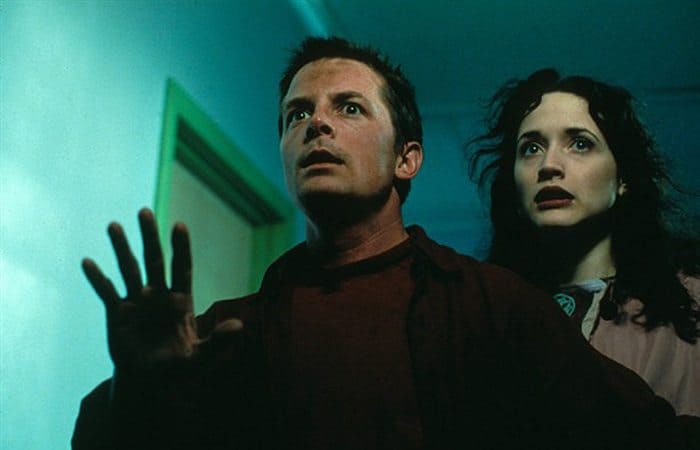 The Frighteners is a fun, slapstick horror comedy that often takes a sudden dark turn leaving you feeling despondent. For all the fun & games that come with Frank’s fake exorcisms, the darkness behind the man makes him a layered character. He suffers & doesn’t know if his ability is a gift or a curse. Michael J. Fox is a revelation & it’s great to see him really stretch his acting legs.

He’s backed up by a cast that revel in their roles too. Some get to have fun, some get to do a whole range of emotions while some are just wickedly evil. Jake Busey is terrifying, Dee Wallace as the older Patricia Bradley is incredibly sinister, Jeffrey Combs is fantastic as an unusual FBI agent…The Frighteners nailed it with its casting.

Where it doesn’t quite nail it is with the Danny Elfman score, the comedy elements (a lot of the jokes here are very childish) & the overly happy ending. It’s so sickly sweet, so unnecessary & so out of place.

A pity really, as the film is solid from the moment it begins. There are a few times that feel a little bit dragged out but these are easy to overlook considering the overall quality.