Having garnered a cult classic following since its 1976 release, it’s easy to see why this slasher horror is still proving to be popular amongst genre purists. A smart and interesting tale that keeps you guessing and delivers a hefty payoff. 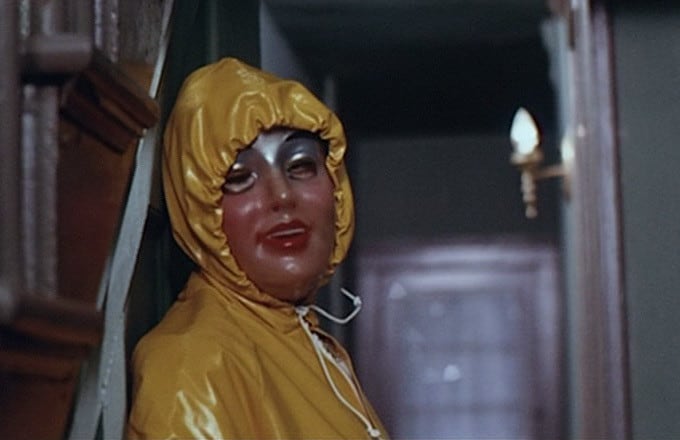 Set in 1961, Karen Spages (Brooke Shields) is preparing for her first communion. Her older sister, Alice (Paula E. Sheppard) gets jealous when she is gifted with a crucifix and sets about scaring her. Before locking her in a room in an abandoned building and threatening her if she tells.

Alice is a nasty piece of work, that much is established early on especially when she puts on a translucent doll mask to scare the housekeeper of the priest. This mask and a yellow raincoat are important as this is what the killer of the movie chooses to wear. The first victim? Karen on the day of her communion as she is strangled at the back of the church.

Her body is discovered but only after Alice tries to receive communion. She is denied by the priest because she was born out of wedlock. Religion eh?

It’s the girl who comes under suspicion of the murder. When more people around her get attacked/killed all signs seen to point towards the youngster regardless of her denials. Is she just a master-manipulator or is the killer someone else?

Alice, Sweet Alice is a good horror movie with fairly blatant anti-Christian themes and imagery as well as some shocking death scenes. All of this means it is no surprise that it was one of the films seized and confiscated in the UK during the ‘video nasty’ craze. Although it was never prosecuted.

At first, it’s hard to really gauge just what kind of horror this is. Once it really gets going though, the mystery really takes hold. Interestingly enough, the killer reveal actually comes two-thirds of the way in. You might think that this might see it lose momentum but it really doesn’t, in fact it helps deliver an outstanding finale.

The cast are excellent, convincing and really getting into the meat of their roles. This would be Brooke Shields debut role and while she’s not in it for long, it’s a memorable turn.

At 105 minutes, it’s probably a bit too long with a few lulls in pacing and a slow middle but it does build tension nicely and keep you really guessing. You can see that it was heavily inspired by the Excellent 1973 horror, Don’t Look Now but it’s subtle enough to not be distracting.