A polarising figure at the best of times, Donald Trump is rarely out of the news. As a candidate for the United States presidency his views have been met with equal amounts of horror & adulation. It’s the former reaction that seems to have spanned this one-note joke about the bad-toupee wearing billionaire.

Trump Dump’s premise is a simple but direct rip-off of the popular Flappy Bird ‘game’. Here you control a bald eagle & you must beat Trump’s wall (presumably the wall Trump suggested he would build on the border with Mexico).

Tap the screen to guide the eagle through the gaps a set number of times with increasing difficulty (start at 1 with the number increasing every level after). You then get to drop bird shit onto a cartoon version of Donald Trump which turns him into a huge poo. 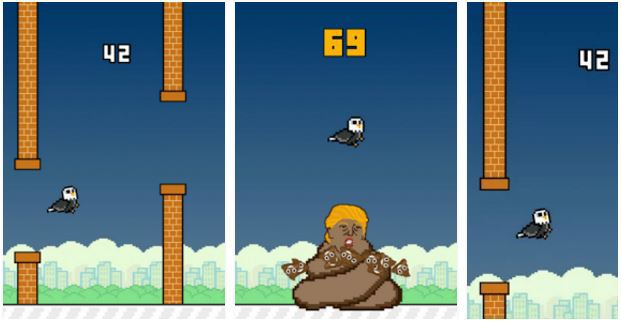 That’s your game…barely 2 minutes of fun & delivering a clear political message, the bald eagle, the wall, Donald Trump being a piece of shit…it doesn’t get much clearer than that.

I’m not interested in reviewing its message; this is a free to play game with obtrusive ads & an in-app purchase of £1.49 to remove said ads. The reality is this is an exploitive game hoping to cash in on the unpopularity of Trump. Don’t believe me? Check out the reviews on the Apple Store for the game. Huge amounts of 5 star ratings as those playing believe they are in some way ‘sticking it’ to Donald Trump.

The latest questionable reviews sees a user claiming that Trump had said he would drop out of the race for president if the game had 10 million downloads. These reviews urge people to rate it high & download it as often as they can to support the possibility that Trump would ever drop out. However I can find no evidence that Trump has ever spoken publically about this game let alone made such a promise.

The only one laughing here are the ‘developers’ who are raking it in with ad revenue & people who think they are sticking two fingers up to Trump by paying £1.49 to remove ads from the game.

I don’t know which side is dumber… 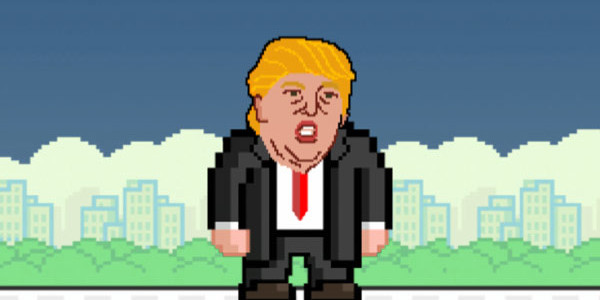