Magic Mansion sells itself as being ‘wonderfully’ retro with one-touch gameplay. The visuals are styled on the original Gameboy which makes the lack of content even more questionable.

Tap to jump over enemies & traps while climbing ladders. The goal is simple, make it as high as you can while collecting coins. Should you fail you can spend coins to continue from that point or watch an ad for one free continue.

Variety comes from the number of different characters you can play as. Initially just a witch is available but by spending coins you can unlock 7 others. Be warned though, this does not come cheap & to get every character you’d have to spend thousands of coins. After at least 20 attempts to set a high score I had a grand total of 8 coins. This is not a generous game. 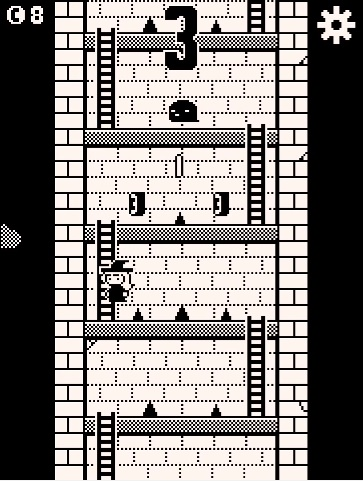 Of course, if you want to get these characters quicker you can spend real money to get in-game coins. There are 3 options:

So for £2.99 you can unlock all characters & give yourself plenty of re-tries to ensure you can set a really high score. Effectively rendering all gameplay irrelevant…not that there was much to begin with anyway.

That’s the thing about endless runners/climbers etc. they are easy to make, popular with causal gamers but light on gameplay. 10 minutes of high score setting then it’s forgotten about. That Magic Mansion thinks ‘retro’ inspired visuals makes it stand out from the pack is laughable.