Fun Hospital – Tycoon’s Back (yeah, that name is pretty awful) is as close as you’re going to get to the classic hospital sim, Theme Hospital. The comparisons are easy to see & often made but beyond the obvious gameplay & visual style the similarities end there.

One is a fun, smart & challenging game while the other is visually appealing, initially exciting before devolving into a bore-fest packed with a huge number of insanely priced in-app purchases. Guess which one is which?

Fun Hospital is bright & colourful with plenty of detail, something that’s quite important as you begin to build rooms for your initial small plot of land. You’re limited to what you can build with more rooms & items becoming available as you level up. You increase in level as you cure patients but you can only cure patients by building treatment & diagnose rooms.

It slows things down significantly & after about an hour of play it becomes painfully obvious that you’ll mostly be just waiting watching your staff & patients wandering around. Sure you have the occasional quest to break things but they offer nothing more than a small distraction. 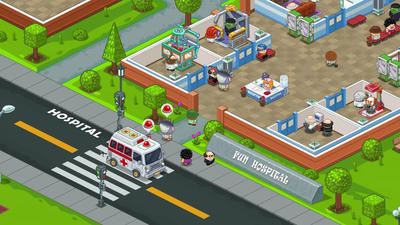 The sim-based gameplay is watered down to such an extent that the most modifications you can make to a room is the placement of the door (unless you’re willing to part with some real money). You hire staff to take care of your patients but their stats seem to really not matter. Ability, charm, efficiency & energy…if they have any major impact on the gameplay I’ve not noticed it yet.

You pay for staff & pretty much everything else with green dollars. This is the standard currency of the game & isn’t in short supply. What is though is the premium currency…diamonds.

These are used to buy any number of bonus items, rooms & extra spins on an odd roulette game. Optional of course, they are priced in the usual disgusting manner that plagues the free to play market.

79p will get you 20 gems with that you can buy a ‘motivator’ that increases staff efficiency by 15%. Sounds reasonable? How about if I told you that it will only last for 20 minutes? The runes, bonuses that can be used to increase stats for a brief amount of time, are one of the biggest rip-offs I’ve seen in a free to play game ever.

For example…let’s say you want the Greedy (Day) rune that gives you 150% money from patients. It lasts for just 24 hours & costs 40 diamonds. That’s £1.58 for absolutely nothing; the 150% bonus is so insignificant that you won’t even notice any difference.

It’s worth noting too that the games ‘best value’ (their words, not mine) package is the also the most expensive coming in at a whopping £79.99.

That being said the game doesn’t shove them in your face & I’ve not come across any ads yet. The developers are regularly updating the game too & listening to feedback from players, something that really doesn’t happen enough in the mobile market. 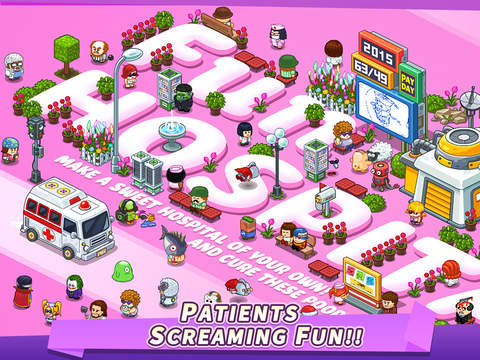