Evil Dead – Endless Nightmare, its gameplay description is in the title…endless.

Based on the horror movie series of the same name but seeming to draw inspiration from the second & a little of the remake, you control an unknown person tasked with leaving the cabin in the woods & making a break for freedom.

Like the movies there are numerous threats in the woods such as trees that try to grab you & Deadites swarming over the hills. You play from the first person perspective with controls limited to looking around & slight deviations in routes. Tapping the upper right hand of the screen will see the character attack what is in front of him.

At first it’s literally just a punch but with the Deadites coming thick & fast you won’t make it far with that. It doesn’t take long to start getting weapons & they make a huge difference!

These are unlocked by completing missions/tasks. These get increasingly difficult & range from killing a Deadite with your fist to collecting a certain number of blood drops that are all over the forest.

Early on the only weapon you’ll need is the crowbar. It kills Deadites with one hit & the range is very good. Projectile weapons are next to useless as they are limited in ammo & aiming can be a bit tricky no matter the control scheme you choose to use (tilt or touch). While weapons are up-gradable it’s a slow process as they require blood drops.

Currency comes in two forms…blood drops & tokens. Blood drops are used to unlock more powerful weapons (although these can also be unlocked by completing missions too) & upgrade the ones you already have. Tokens are used to upgrade your character, unlock the featured in-game packs & can also be used to buy blood drops in bulk.

Of the two this is the only one that you can buy with real money. Starting at the lowest you can buy 35 tokens for £1.49 before rising incrementally until it reaches the eye-watering price of £79.99 for 3000 tokens. Sickening.

To put the lowest prices tokens in context…the lowest priced featured pack costs 99 tokens. In it you get 6 health packs & an exclusive machete. To buy it you’d need to cough up £3.99 for 100 tokens…£3.99 for 6 consumables objects (that you will use very quickly) & an exclusive weapon. Am I the only one that sees the insanity of this!? 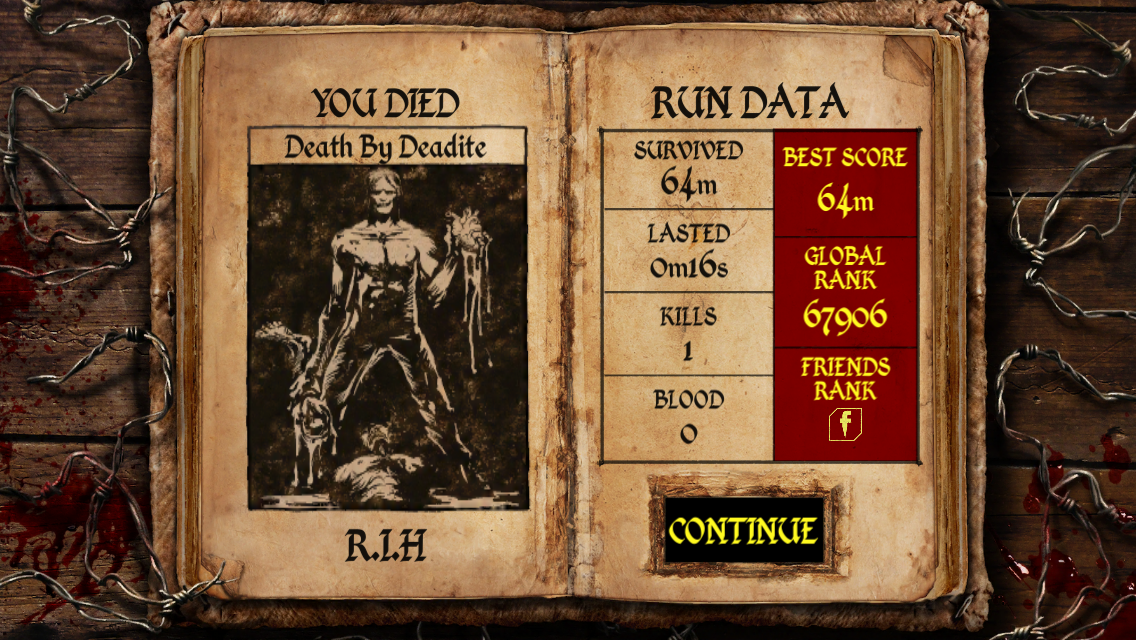 In-app prices aside, the game has some replay value thanks to the missions & it’s not afraid to throw out the occasional token here & there (it’s not exactly generous but I’ve seen way worse then this game). It’s hardly going to keep your attention longer than half an hour though because of the total lack of variation in gameplay.