House of the Dead is the worst video game movie ever & I’ve seen Postal (another Uwe Boll movie, can you believe?). It’s based on the 1996 arcade game by Sega & I’m genuinely amazed they let this go ahead.

A rave is being thrown on an island & a group of awful, bland characters miss the boat heading for it. They pay a fishing boat to take them there but not before they are warned that the island is referred to as the island of death.

When they arrive there they find the rave deserted (a rave supposedly thrown by Sega according to the banner) & plenty of clues that things maybe aren’t alright. So what do they do? Start drinking & having sex all while spouting off terrible lines & pretending like they want to be part of this Uwe Boll movie.

Shortly afterwards they are all attacked by zombies, awful looking zombies that can be killed with body shots. Yep, rotted & dead zombies can be taken out by a couple of handgun shots to the chest. Some can even be dispatched by being stabbed! It’s utterly stupid.

Luckily for this group of wannabe ravers (and a few survivors from the initial attack) the captain of the boat that brought them there just happens to be a smuggler too & on this trip he brought lots of guns!

What follows is one of the worst, most out-dated action scenes ever committed to film as everyone becomes perfect marksmen with infinite ammo. It lasts for ages too & has these laughable moments where the camera pauses & spins around the character currently shooting for reasons that I can’t understand. It doesn’t look good & has shocking continuity. Seriously, one character is shooting a shotgun but when the camera does it spiny thing she is shooting a handgun! This happens with other characters too! 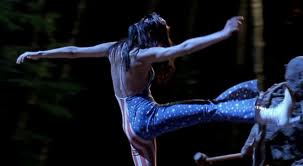 Uwe Boll clearly loved The Matrix as one character whose only defining trait is based around her outfit, starts ducking & jumping in slow-motion all with that spinning camera effect.

The techno soundtrack that accompanies it just makes the whole thing so much worse.

So you may be thinking that the zombies are the only link here to the light gun game but you’d be wrong. The opening credits, during gun fights & at random zombie sighting moment’s shots of the gameplay is just jammed in. Someone shoot a zombie? Here’s a sudden cut to a zombie in the game being shot!

You see, in a final slap in the face for fans, the main character is asked his name at the end & he reveals it to be Curien. You know? The same as the mad scientist from the game?

The main bad guy is revealed to a Spanish doctor who found a way to live forever & the island is his base of operations.

It does result in my favourite moment in the movie though.

“You made yourself immortal, why?”

Not just the worst video game movie adaption but one of the worst movies ever made.

House of the Dead