Ben Blutzukker is a one man band. A project of sorts that has come off the back of a different style of music released under the name Blutzukker. Blutzukker is the same man’s other one man band. Ben Blutzukker himself seems to be a very creative and talented man who likes to challenge himself. He has written an eBook, been credited in films, written puzzle solving programs and even ran a small record label. Ben has also been the bassist in a few heavy metal bands, most notably Jormungard, and started up a web portal for new bands to track when their songs are played on radio which also tracks how many listeners there were. You can check that fabulous idea out here, if you are interested.

Aside from all of that, Ben then formed Blutzukker. Blutzukker is a dark, electronic, techno project. It deals with dark themes but musically is pure electronica. While this obviously shows even more talent from the creator, for me, it is the opposite of what I would look for in music. Thankfully though Ben Blutzukker doesn’t sit still for long so he created his second one man band project. This project took a handful of songs from Blutzukker’s 2012 release, Digital Blood, and gave them a metal face lift. It has since been self released as the EP, Analog Blood. 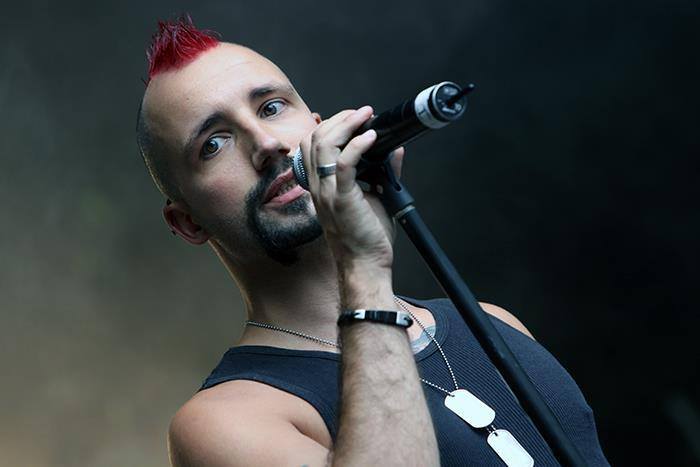 Released on the 7th of December, 2015, Analog Blood is a 4 track EP that is around 21 minutes long. It is a project and unfortunately it sounds like a project a lot of the time. Musically it is of a slower tempo for the most part and Ben Blutzukker sings with a raspy, black metal esque voice. Musically it doesn’t feel particularly black metal though. At times, with the slow, brooding riff it almost feels more like sludge or stoner rock though there are obviously a load of styles that have influenced the EP.

The first track, Walpurgisnacht, is a decent start with a basic but interesting riff and drum beat. It works well enough with the vocals and there are a couple simple but neat guitar lines packed in too. You do find yourself waiting for something to happen though. There’s a welcome speed up of the beat near the end, before a softer melody closes the song.

From Hell is the next track. Written about Jack the Ripper, it was one I was looking forward to but it isn’t a song I enjoyed too much, other than they lyrics. It has another slow riff and pretty weak sounding drums at the beginning before the verse, which I do like, vocally and musically. It has a great little rhythm and I love how each line of vocals ends with a flourish of guitars and drums. The section after this is a bit of a mess though and the vocals sound terrible over tip tapping drums and muted guitar notes. It never really pulls it back for me either.

Digital Blood is a welcome relief as it starts with a faster tempo and decent drumming. It slows down and becomes very experimental when the vocals start. The vocals are delivered slowly over a slow riff with each verse separated by a good, thrashy blast of guitars and drums. There are loads of different tempos and time changes which makes the whole song feel equally creative and a odd.

The final track is called Red and it has the best intro so far sounding very much like a full on black metal track with very fast drumming and a solid riff. It has a real Abbath vibe at the beginning though slows down again for the verses. Musically there is a lot to like in this track, especially in the faster sections, but the vocals in the chorus sound a bit strained. In fact they tend to sound less strong whenever the tempo and volume jumps up.

It is a bit of an oddity really. They aren’t 4 unique tracks and that is important to remember. I think that is the problem though as he tries to recreate the beat of electronica with guitars and drums. There are obvious nods to other genres with short black metal, thrash and even doom moments within. They just sometimes feel too restricted by having to recreate an already existing song structure.

There are plenty of things I am not sure about on Analog Blood. Unfortunately there are also things I just don’t like at all. It isn’t all bad though as there are also some good riffs, good lyrics and good guitar lines. I like the last 2 tracks better than the first 2 for certain and while it hasn’t set any new standards in black metal, it is interesting and creative enough to at least be given a listen. Ben Blutzukker is obviously a man with an abundance of talent and I will be keeping an eye on his future work to see what he tries next. I would love to see him take all that talent and have a go at an original black metal song. One that isn’t forced to stick to the structure of an already existing track. He certainly has the talent to do it.

Check out the EP for yourself on YouTube or over at Ben Blutzukker’s website. If you like what you hear you can purchase it from Amazon, iTunes, Google Play or his Band Camp page. You can also stream it now on Spotify, Deezer and Napster. Check out Ben Blutzukker on Facebook or Twitter for more information on him and his music. Be sure to give him a like or follow while you are there.