The story of Enslaved: Odyssey To The West commercial failure is almost as famous as the game itself. Anyone who has a modern console will have heard in some fashion or another that Enslaved is a ‘hidden gem’. That it boasts both exciting & rewarding gameplay but also has a story & characters that matter.

I went in to Enslaved: Odyssey expecting a lot…

Set 150 years in the future where a huge war has destroyed the Earth, killing most humans & leaving behind a race of robots called mechs. The mechs were used as weapons during the war & still follow their original programming….destroy all hostiles. 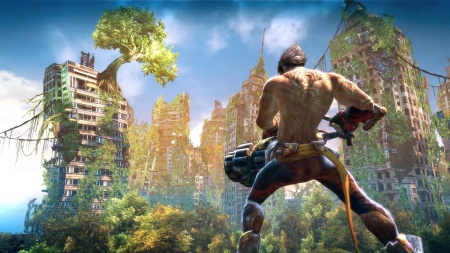 You play as Monkey who has woken up inside a cell onboard a slave ship that is on a crash course. Escaping, he runs into the mysterious Trip who is also trying to escape the crashing ship. They get away in an escape pod (sort of) but crash land. When Monkey wakes up Trip has placed a slave headband on him that forces him to obey her every command & if she dies, he dies.

She instructs him to help her to get back to her village over 3000 miles away. Monkey is unhappy about it but agrees to help realising he has little choice.

The world is a shadow of its former self but unlike most post-apocalyptic worlds, Enslaved’s is a vibrant & pretty place with mother-nature exerting her control again. Everywhere are remnants of the world that once existed but now over-grown with lush greenery & plants. It is one of the more attractive post-apocalyptic worlds.

The story has a number of twists & turns as Monkey & Trip make their way towards her village that will eventually see them go head-to-head with the slavers themselves, the mysterious Pyramid.

Throughout the game you control Monkey who is an expert climber & fighter. The platforming sections are easy to traverse & easily identifiable by glowing sections. The combat involves up close fighting using Monkey’s staff that also doubles up as a projectile weapon for distance sniping.

While you fight mostly mechs there are a few variations on what types that force you to plan your attacks. Shielded enemies can only be hurt from behind or if you disable their shields while larger enemies such as the dog mech take a more varied approach.

The combat isn’t the games strongest area…it is often far too easy to just stun a large group & wipe them out quickly especially when certain staff upgrades have become available. Thankfully it never feels repetitive as the battles are well paced & rarely leave you frustrated.

As well as protecting Monkey it is up to the player to make sure Trip remains unharmed as well. Often she will keep out of the way while you battle but there will be times where she needs protecting. She isn’t completely useless though….she opens doors, scans areas for enemies, can create a holographic projection to distract & at times can also help Monkey progress by crawling through small holes or being thrown up to higher areas.

Having to protect an AI character throughout a game is often the sort of thing I would avoid as it has the potential to be extremely frustrating (example: Spec Ops – The Line’s AI) but Trip is never really a problem. You never feel like she is danger as Monkey is skilled enough to handle all eventualities & that only gets easier as you upgrade. 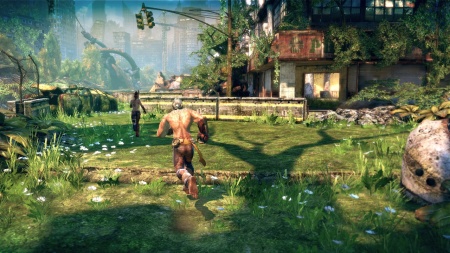 There are 4 areas that can be upgraded….shields, health, combat moves & the staff itself. By collecting small orange orbs scattered throughout the levels as well as dropped by enemies, Trip can upgrade Monkey once asked too. By time you’re halfway through the game with the right upgrades you will find yourself more then a match for some of the tougher mechs that come along later.

The reality is though that Enslaved is an easy game even on the toughest difficulty (especially if you play on easy or normal first as your upgrades carry over). It also incredibly linear with almost no deviation off the path allowed. The first few chapters drag somewhat as you are led hand-by-hand through easy platforming sections & combat. It is also pretty short with only 14 chapters & each taking around about 15 minutes depending on how quickly you move through an area. 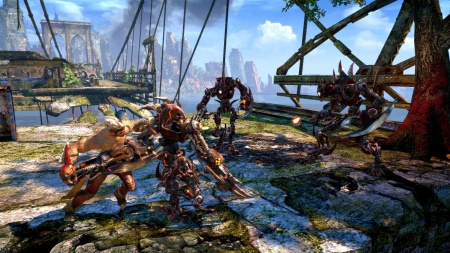 Where Enslaved does excel is with its story & characters. Monkey is played by the excellent Andy Serkis in voice & motion capture while Trip is played by Lindsay Shaw in the same way. It makes for some of the most compelling characters I’ve seen in a video game for years. Motion capture allowed for more realistic facial expressions (Think LA Noire) & so much of the story is told through their faces…such as the shock of Monkey’s when he realises that Trip has put the headband on him.

It’s this realism that allows you to get drawn into the story & care about the characters. I dare anyone to watch the ‘turn it back on’ scene & not feel a twinge.

However all of this aside, the ending is such a disappointment. I won’t spoil it of course, save to say that I just expected so much more. Perhaps they were banking on a sequel which is not going to come anytime soon.

It’s a great game but it is flawed in ways that the casual gamer just wouldn’t buy into. A great story with great characters isn’t enough to sell a game unfortunately. Not to suggest that the gameplay of Enslaved is bad but it was not going to revolutionise platforming games.

Enslaved: Odyssey To The West