“Oh, well let me see: We had an angel, a whore, an eunuch, several dozen idiots, an unkillable mick, a one-man holocaust in a duster coat, the occasional twenty-course banquet for the mother of all fat fuckers, inbreeding, family feuds, bulimia, a retarded child (always good for a laugh), and the utter destruction of our most sacred shrine and secret retreat in the detonation of a fifty-ton bomb”
Preacher is an American comic book series published by Vertigo, an imprint of DC Comics. The series was created by writer Garth Ennis and artist Steve Dillon with painted covers by Glenn Fabry.

The series consists of 75 issues in total – 66 regular, monthly issues, five one-shot specials and a four-issue Preacher: Saint of Killers limited series. The entire run has been collected in nine trade paperback editions. The final monthly issue, number 66, was published in October 2000. 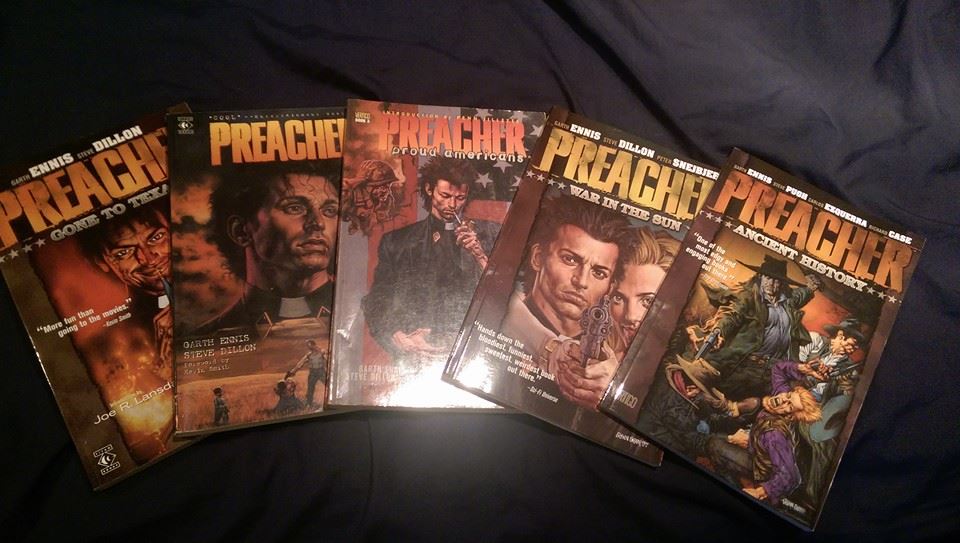 The way I experienced Preacher was through the collected editions – which are all the comics combined into 9 different books – it took me a little over a year to finish them all. I knew while reading them that should I ever review Preacher it would have to be the entire story at once and that it would be extremely difficult. It’s not an easy series to sum up in a few words, and the different emotions you feel, stories you live through and characters you encounter throughout are not easily explained to someone who has never read it, but I’m gonna do my best. 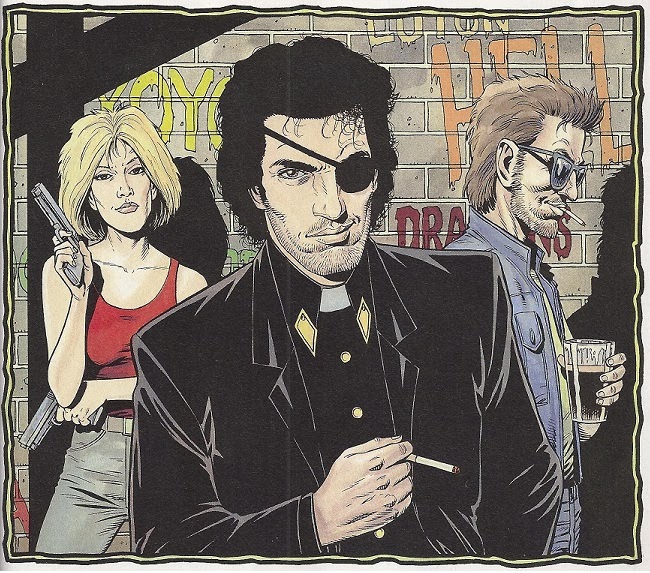 Preacher tells the story of Jesse Custer, a preacher in the small Texas town of Annville. Custer is accidentally possessed by the supernatural creature named Genesis, the infant product of the unauthorized, unnatural coupling of an angel and a demon. The incident flattens Custer’s church and kills his entire congregation.

Genesis has no sense of individual will, but since it is composed of both pure goodness and pure evil, its power might rival that of God Himself, making Jesse Custer, bonded to Genesis, potentially the most powerful being in the universe. 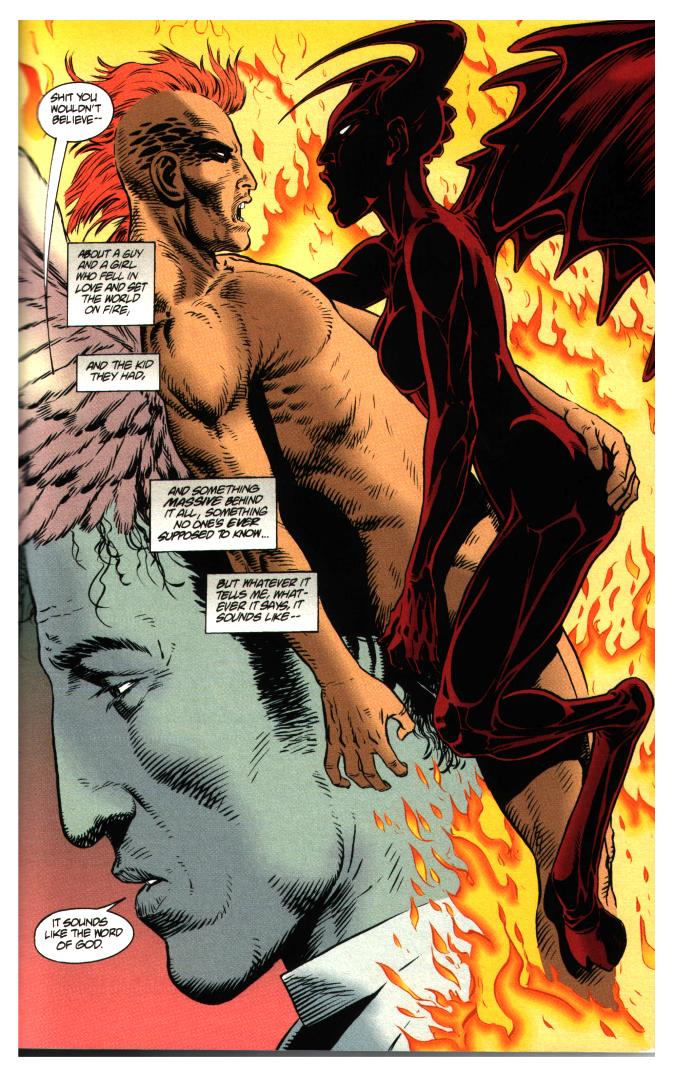 Driven by a strong sense of right and wrong, Custer journeys across the United States attempting to literally find God, who abandoned Heaven the moment Genesis was born. He also begins to discover the truth about his new powers. They allow him, when he wills it, to command the obedience of those who hear and comprehend his words.

Jesse is joined by his two companions; Jesse Custer’s romantic interest, and a trained marksman of exceptional skill, Tulip O’Hare and his blood-sucking Irish friend, Cassidy (or Proinsias Cassidy, when we later discover his full Gaelic name). They aid him in figuring out this whole mess and evading foes amongst multiple other fools who try to stand in the way of his journey to meet the Lord himself.

Preacher has many different story arcs and characters, but there are several main enemies he crosses, including: The Grail, a secret organization controlling the governments of the world and protecting the bloodline of Jesus; Herr Starr, the Allfather of The Grail, an extremely ruthless and determined perverted man who murdered his way up the ranks; the Saint of Killers, an invincible, perfect-aiming and pissed off Patron Saint of Murderers and Assassination; Jesse’s redneck family – particularly his cold-blooded wheelchair-bound Grandmother (Marie L’Angelle), her muscled and equally sick bodyguard (Jody) and T.C, a depraved and violent man who’s primary interest is having sex with everything and anything (including, memorably, the cake presented to Jesse for his tenth birthday).

^ he said that after being hit with a nuclear bomb

Let me just start here by saying that I think Preacher is awesome. It’s straight-talking, bloody and contains so much religious satire, but it has its romantic and emotional moments as well. Trust me, as much as I laughed and cringed at the gory (and sometimes downright disgusting) imagery, Preacher also managed to break my heart and make me swoon for the handsomely drawn Jesse Custer.

It’s impossible to discuss every aspect of the comics, no matter how much I want to, so here’s my top 3 favourite storylines in the comics:

It’s hard to know where to begin, but I suppose I should start with the backbone of the story, Jesse and Tulip’s love for each other. Their romance lingers from start to finish, through incredibly difficult and insane circumstances but still it remains. Despite leaving her behind several times, mostly to keep her safe, they always end up back together due to their strong bond. They would do anything for each other, even sacrifice their life.

Next it’s definitely gotta be, Jesse Custer’s quest for God. Preacher is full of holy and mystical beings and yes, God is one of them. After being possessed by Genesis he decides to make the good Lord pay for all his sins. Through different angels, some fallen and not so holy, he discovers more to aid him in finding God’s weakness – but in the end, it finds him. 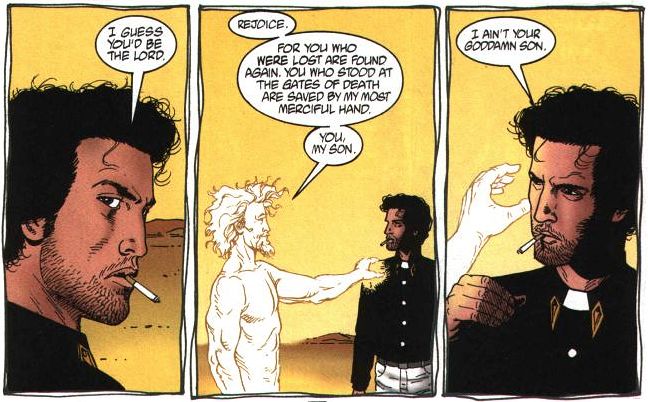 As I said, there’s a lot of religious satire, something I really enjoy and The Grail storyline is just that. From the purely inbred last descendant of Jesus (The Messiah), to the morbidly obese and bulimic Allfather D’Aronique, each depiction of characters with faith or religious affiliation are hilariously disgusting and perverted.

Marseilles: God, he disgusts me. What do you suppose he’s thinking about?

Everyone’s backstories are poignant and memorable but Cassidy’s is the most powerful. When I said that Preacher broke my heart, what is revealed about him is what did it. Of course, I wouldn’t want to spoil it for anyone, but before I found out he was my favourite character and afterwards just looking at him made me uncomfortable and sad. Living as a vampire you would understand that most of what he’s done is unforgiveable but you don’t know the half of it…

There’s too much that happens in the world of Preacher, and I loved every bit of it so choosing to talk about very minor parts is incredibly difficult without thinking that I need to include so much more. So to try and cram in more of a reason why you should definitely give this series a chance, here’s some of my favourite characters:

Saint of Killers is a bad ass motherfucker, no two ways about it. He’s created through tragic circumstances, and is in the possession of the most incredible weapons both within Heaven and Earth (and Hell). His two Walker Colt revolvers were created through melting the Angel of Death’s sword in Hell’s burning fire, they will never miss a target, never leave his possession, never run out of bullets and can kill anything. He’s a saint with a mean streak and shakes things up every time he’s on the page.

Jesse Custer, our main man, believes in old fashioned chivalry and justice. With his ‘man’s gotta do what a man’s gotta do’ attitude and his recurring conscience in the form of the ghost of John Wayne, you can’t help but fall in love with him and want to follow him Heaven and Earth to find what he’s looking for. 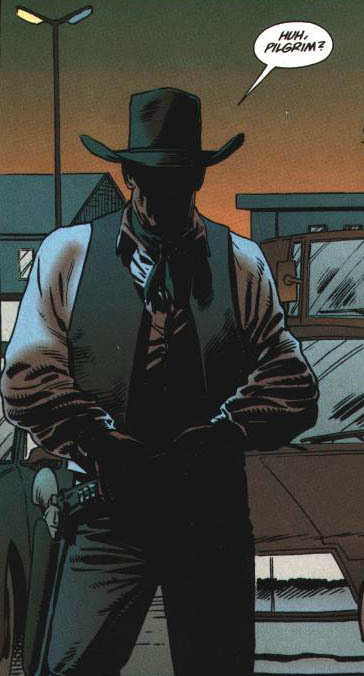 Lastly, it’s Herr Starr. As evil and depraved as he was, I couldn’t help but laugh out loud at some of the shit that came out of his mouth and the situations he found himself in. His character was truly entertaining, introducing us to the most ridiculous characters and situations. 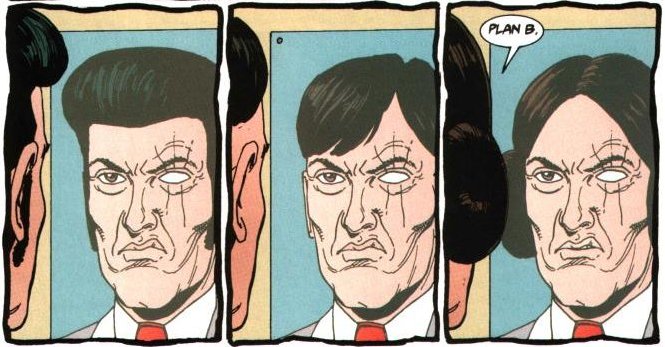 Overall, Preacher is an excellent comic book series. It’s hilarious, dark, romantic, gory, and honest as hell. It never holds anything back and for that I absolutely love it. The artwork is fantastic, the story telling is brilliant and the characters are genius. If you’re ever going to read one comic books series then make it this, but prepare yourself for some extremely vulgar imagery. This is most assuredly not for the easily offended.

1 point short simply because I’m not hugely into westerns and this is very heavily influenced by them, but even bits I didn’t fully relate to were cool anyway – such as, John Wayne.