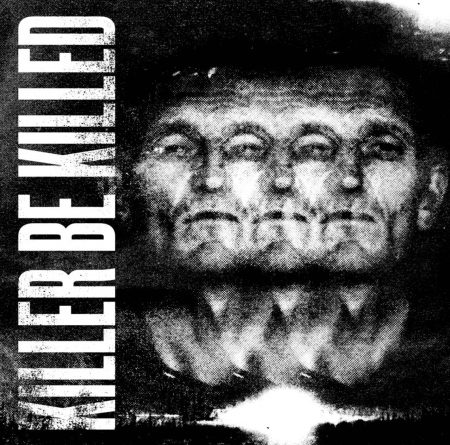 I can get into a super-group that sees Max Cavalera of Sepultura/Soulfly/Cavalera Conspiracy fame, Greg Puciato of The Dillinger Escape Plan, Troy Sanders of Mastodon & Dave Elitch of The Mars Volta all throwing in together to create a slamming metal album.

It’s a side-project that had music written before a name had even been decided on & Max & Troy hadn’t even met before they were both on board. Troy walked up to Max at fest they were both on (Soulfly/Mastodon) & introduced himself by saying “Hey, I’m Troy. I think were in a band together”, the link between the 2 being Greg Puciato.

Happily the band gelled together really well & the result is the debut album of Killer Be Killer, self-titled.

Opening with the previously released single, Wings Of Feather And Wax, it is a fast-paced number that has a fair amount of melody in its vocals. Around about the 1:40 mark the song breaks down into pure aggression & heaviness, I love the drumming here & it is an impressive opener.

Face Down opens with a speedy drum roll before a nice guitar hook jumps in. It’s a song where everyone shares vocal duties, is super heavy & develops into an almost different song by the end (even a bit proggy). One of the standout tracks. Then we have Melting Of My Marrow which is a riff-heavy track that is a lot more melodic then what came before. Vocally the Mastodon influence is clear but with a more punk edge when Max steps in. It is one of those songs you just want to hear live.

Snakes of Jehovah is one the heavier songs on the album with the hardcore influences coming through. It’s a banger that just gets your blood pumping & your neck muscles going. The next song, Curb Stomp, has Max Cavalera written all over it & when he starts singing it wasn’t exactly a surprise, it is a groove-laden number that just doesn’t let up.

A slower number, Save The Robots plays out with moments of injected pace & heaviness which is then followed by the full-on Fire To Your Flag. A more hardcore number with the usual shared vocals making it quite a multi-layer song. Look out for the pure ‘lose your shit’ moment about the 1:24 mark, that is some heavy stuff.

I.E.D. can’t seem to make up its mind what kind of song it wants to be with all the influences being shared at once. It has a nice slow-down section that is backed up with an evil sounding riff & shouldn’t work, but it does.

Groove takes front of stage again with Dust Into Darkness with its slower pace doing it no harm. Twelve Labors is one of the more prog sounding songs & really benefits from a killer riff. The latter half of the song really turns up the melodic dial before picking up speed again.

The album is brought to a close with Forbidden Fire, a haunting number that has almost spoken-word vocals before exploding into action. This is repeated again & showcases the group’s strength in vocals & the instruments they play. It is a sorrowful sign-off but not something I might have chosen as the final song.

Killer Be Killed is an excellent album with only one major negative I can think of. With the varying influences & vocals at times it can feel like an album filled with stand-alone songs & not a cohesive experience. It’s all really good stuff (although I didn’t love Forbidden Fire) but feels like a one-time only deal as everyone involved as a lot of work going on with their main bands. It’s a pity as I would love to see some of this stuff played live. Maybe a few festivals next year!