Lists. Everyone loves a list. Especially at Halloween where you get to read everyone and their mother’s ‘recommendations’ of what to watch this spooky season. We should know, we did one this year too. Everyone’s got an opinion of what their favourite Halloween horror recommendation is, so whose should you care about?

How about those people delighting us with their music? You know, the cream of the British rock and metal scene. A style of music that has a ton of influence from horror and has used it to tell their own stories in some way.

So we decided to reach out to some of the UK’s finest and brightest acts and ask them to recommend us a horror movie to watch and the reason why they chose that one. Enjoy!

Always a popular choice with Zombie fans I know! But why is it personally important to me? Well this film seems more real to me than many other zombie films, even with the sometimes dated special effects. For me it’s the mood and atmosphere that makes it my favourite Zombie film. The scenes of early panic, it’s pace as the tension builds, and then the very practical solution to fortify a shopping mall. But then of course it gets even more interesting, when finally given all material wealth imaginable the characters are still unhappy, prisoners of it, literally… money can’t buy happiness.

Furthermore, consumerism is shown in its ultimate incarnation as we eat each other! Clever metaphor or grotesque caricature? Or both?! Anyway, over the years I have become so comfortable with this film I can actually put it on late at night and let it happily subdue me to sleep, like a visual lullaby. It’s not just a film to me, it’s like a safety blanket, it’s a dear old friend!

I’ve been absorbed by the book and film adaptation for years..

Not only is the narrative and genre spanning story line compelling to watch, ambient sound tract atmospheric and script absolutely wonderful, the acting of the leads is as high as any film you’d watch. In particularly Brad Dourif’s!

It also contains the greatest jump scare captured on film.

The reshot ending may not keep in the spirit of the rest of the film but I bloody love it (almost as much as the first).

As horror movies go this doesn’t drift too far from the supernatural, paranormal story the first is known for, I feel that the director (James Wan) learned from the pacing issues of the first movie to give us a well structured movie that better holds your attention, plus it is based in Enfield, who doesn’t like a story based on documented events nearer to our doorstep?

For me it’s got to be Alien. Low budget but the effects still hold up now because it’s all about the shadows, the minimal sightings. Even now it still makes me jump cos I know the Xeno is coming, I just mistime when!

Hammer’s 6th Christopher Lee Dracula movie usually gets a tough ride from purists, due to its questionable idea of mixing gothic horror and “groovy” contemporary youth culture, but ‘Dracula A.D. 1972’ is 90 minutes of pure entertainment, that just seems to get better with age. Christopher Lee and Peter Cushing are awesome as usual, the “kids” are likeable, and there’s gore, humour, and a very funky soundtrack. The opening scene features 2 songs from rock band Stoneground, and fan favourite Caroline Munro gets an entire chalice of blood poured over her heaving bosom. What’s not to love!

Tim: I’ve always had a soft spot for American Werewolf in London – mainly because you get to see Jenny Agutter naked! It is a great film though, always loved the tongue in cheek element and the special effects hold up to today’s standards pretty well still – in its day it was ground breaking.

Craig: If I was gonna recommend just one movie, it’d be ‘The Loved Ones.’ Written and Directed by Sean Byrne, kinda like Misery ‘on speed’ the first time I saw it I loved it!

Stuart: It’s rare that I find a horror film that makes me laugh as much as it makes me jump, but Dog Soldiers does plenty of both! The setting always reminds me of the woods near where I grew up. It’s scary, it’s funny, and it’s British!

Mel: Definitely has to be ‘Shaun of the Dead.’ A wonderful satire of the whole zombie genre, deadpan delivery, and eternally quotable one-liners – even 16 years later it holds up!

Stu Bailey of White Raven Down

La Horde is a french movie with English subtitles that I picked up randomly whilst shopping at a supermarket. Something intrigued me about this film after watching the brilliant french movie “ils” late on tv one night.

For me this was 28 Days later set to a backdrop of corrupt street crime in Paris, France.

The cinematography is gritty and grimy as a notorious street gang has to join forces with the city’s undercover police who were sent into the tower block hideout to take out them out. Genuine tension between the characters is fascinating to watch as the tower block becomes overrun by a “Horde” of flesh eating zombies. Yes the modern scary running kind that literally want to tear you limb from limb whilst eating and drinking your grisly innards…

Some folk may not get on with the subtitles but for me it just ads to the tension giving the film a B-movie almost pirate copy vibe. This movie had me gripped from beginning to end in fact the first time of watching it I remember not wanting it to end.

This is tastefully done with the right mix of suspense, tension, violence and gore. I see movies like 28 Days Later, Demons, Lock Stock and Assault on Precinct 13 as inspiration which is absolutely fine by me. But it also has the undeniable influences of the classics like The Living Dead and GBHBL favourite Return of the Living Dead.

I gotta be honest I do not know of any streaming sites that this is available on as I purchased this DVD way back in 2010 the year following its release which unfortunately passed me by.

Which reminds me… to whoever I lent it to… can I have it back now please. I wanna get my freak on with it this Halloween….

When trying to make a recommendation of a great horror, I immediately considered some of my all time favourites like Return of the Living Dead, Candyman, The Burning or Zombie Flesh Eaters… However, for its controversy and influence, I opted for the infamous BBC mockumentary Ghostwatch.

While verite horror has become something of a lacklustre low budget cashcow in recent years (thanks to Paranormal Activity and The Blair Witch Project), Ghostwatch was well ahead of it’s time demonstrating an unsettling and unexpectedly realistic presentation that somehow continues to feel visually compelling despite it’s age and minimal effects.

Broadcast in the UK only once on Halloween night in 1992, the film has become well known as one of the most controversial programmes in British TV history, terrifying a massive proportion of it’s audience and allegedly causing more than 30000 complaints as a result. Many felt deceived by the blatant realism and shocking narrative and thus, the film was effectively banned from UK TV ever since.

Initially portraying itself as a mundane live documentary about a house supposedly haunted by a poltergeist, the film lulls the audience into a false sense of security thanks to the use of famous UK television personalities (including Michael Parkinson, Sarah Greene and Craig Charles) playing themselves, adding a hint of trustworthiness and normality to the otherworldly ambiance. Subtly hinting at the mayhem to come, the ghost appears in brief glimpses while the presenters feebly attempt to fill the time with banal (if unusual) interviews and call ins. Without warning, a sudden shift in atmosphere begins leading to a chilling climax featuring ghostly happenings like possession, screaming cats, film distortion, moving objects, unusual sounds (including binaural sounds meant to make your animals freak out), creepy phonecalls and ultimately, an undetermined ending that lead many to fear for the life of one of the above TV presenters.

Personally, I consider this one of my favourites for it’s foreboding mood, it’s sudden twists and it’s longevity in the face of infamy. Much like the history of Metal, the controversy behind the scenes ignites my interest, inspiring me to write my lyrics (particularly on the debut Repulsive Vision album “Look Past the Gore and See the Art”).

One of the major things I love about horror is that it’s about pushing boundaries and I feel that Ghostwatch was a standout event in this regard. It’s influence is often understated due to it’s relative obscurity but it has become a cult favourite through the circulation of bootleg tapes and more recently through the internet. Well worth a watch… but be patient through the beginning.

To appreciate the full story behind Ghostwatch, I would highly recommend watching it as a double feature with the 2012 documentary “Ghostwatch: Behind the Curtains” as it’s context is exacerbated by its history and the effect it had on it’s audience.

We’d like to recommend a brand new film. Being a black comedy / Horror movie about a struggling Punk band resonated with us in the same way Suck did a few years ago. It’s a fast paced, bloody, hilarious, future classic.

The ABCs of Death

I cant explicitly remember if it was 1 or 2, but the letter Z in one of the film’s is proper fucked up, which begs the question: who the fuck made it to the end like we did. Zygote.

This genre defining ‘unfinished spirit’ horror came out in 1980 the same time as Stephen Kings the shining and I genuinely preferred this to the two. This film subject talks about eugenics, hierarchs and high society and what we would do to preserve our image. has some genuinely some of the most creepiest sound fx in horror film to date, if you are looking for a unique ghost film do not overlook this it stands strong even now.

Oli of A Ritual Spirit

The build of tension in Audition is incredible. Flipping from “This isn’t a horror movie” to “Holy shit what’s happening?!”. It’s one of the first Asian horrors I watched and it certainly left it’s mark… still a great movie 20+ years later too.

With so many of our favourite movies being in the horror genre, we found this difficult to pick just one. We decided to go with the last movie we watched at the cinema. We are huge fans of Robert Eggers’ horror masterpiece The Witch, so our expectations were high for The Lighthouse. Luckily for us, it did not disappoint.

Visually stunning, great performances and with an exceptional score by Mark Korven – We were thoroughly entertained and equally unsettled.

Adz and Tris of Dethonator 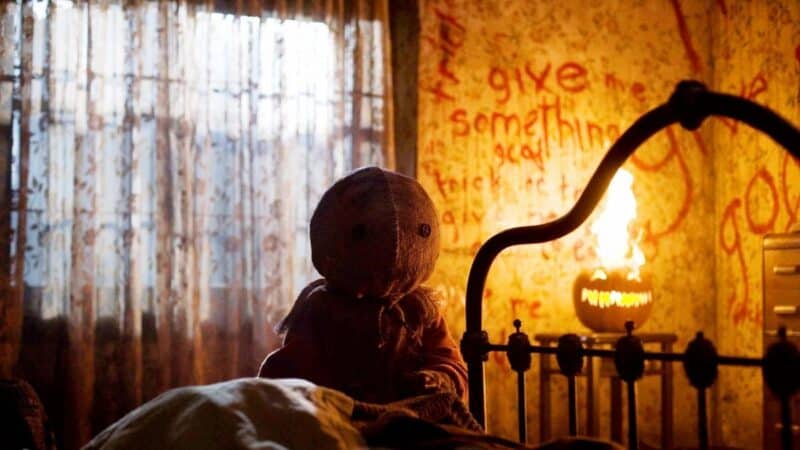 Tris: Trick r’ Treat (2007). Purely because it’s a fun Halloween flick that encompasses the spirit of the season. Always a fun watch

When this came out I found it chilling and creepy that a hotel room had the power to turn you on yourself. No monsters, just you and your mind. Think it could be time to revisit the room this Halloween!