Shadowman…one of my all-time favourite games. It blew me away when I first played it & that was the poorly done PS1 version. It had an epic story spread across the land of the living & dead with some of the most unique characters & evil enemies I’ve ever seen.

There are a number of things that took me by surprise as I played the game, things that I had never seen done in a game before.

Sections of the game involve you infiltrating different sections of the asylum. Later on in the game 1 particular infiltration stood out…as you enter the music switches to nursery-like, soft & comforting to an infant but with an eerie echo. As the tune plays on you hear the sounds of a child playing with a squeaky toy it gets more & more violent before descending into the sounds of a drill. You can actually here as the drill enters flesh & cartilage followed by the sounds of a woman screaming & crying. This is followed up the sound of an evil laughter all the while the initial music continues to play in the background softly.

His serial killer MO is scary enough turning power off in his victims home before stalking them in the dark. He leaves a canary skull with a poem wrapped up inside it at the scene of the crime. Once you gain access to where this nutcase resides it becomes painfully obvious just how he operates. The abandoned hotel has rooms with furniture made out of bones & a decorative river of blood. As you make your way through the hotel you can’t help but feel like he is watching you every step of the way & then you find out the walls are hollow…

Throughout the game Mike’s main motivation is actually to get to his long dead brother who appears to reside in Deadside. Once access to the other side of the engine block is acquired the end sequence begins. Mike finally catches with Luke & he begins to talk & change…it is a revelation that wasn’t instantly clear & it is the subtle changes in the voice that you first notice. As Luke accuses Mike of letting him down his voice deepens at certain points & begins to sound very familiar. 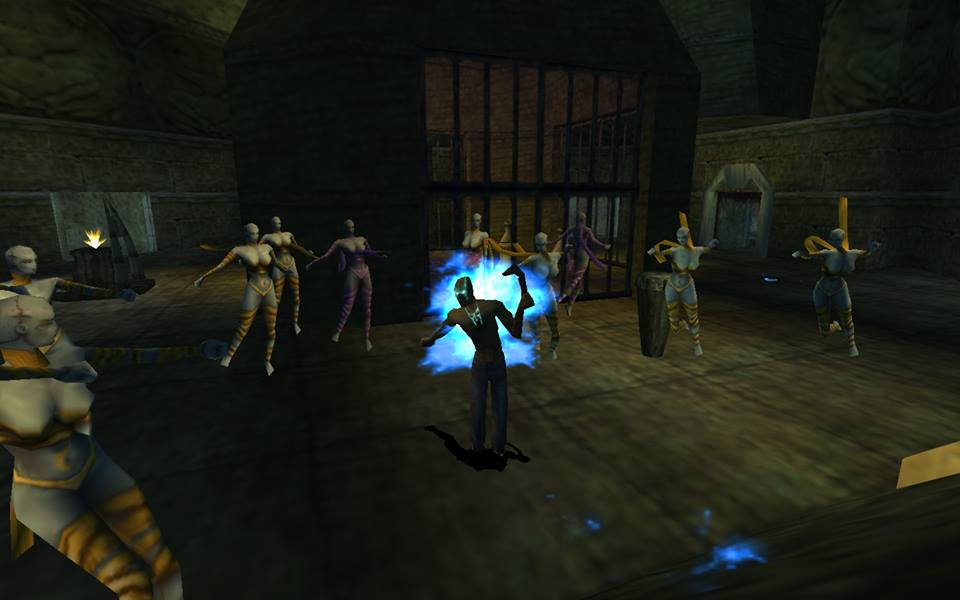 So in your journey you will have to gain new tattoos that allow Mike to traverse flaming paths, grip hot surfaces etc. These are normally buried deep inside ancient temples. As you make your way through them you will notice the blue stone statues that are located in many rooms. Shooting them does nothing until the music changes…it can take something minor to awaken them like a switch being activated but as soon as you do the change in music will indicate that the once still statues are now on the hunt for you.

There are not many characters throughout the game that are in anyway friendly to Mike. Most want to kill him in some way or use him to further their own plots. Jaunty though is a carefree spirit tasked with one thing…guard the bone gates & offer advice. His accent is thick & terrible & he pulls Mikes leg more times than not but he is a welcome sight after battling through dead souls & wading through rivers of blood. How many times are you going to get the opportunity to talk to snake with a top hat & a monocle?

The architect of the Asylum & a serial killer. We are lead to believe that Jack is a copycat killer of the original Jack the ripper but as you hunt him through his labyrinth under the city you find his diary pages that reveal him to be the original killer. That isn’t the only thing that makes this entry so exciting…you hunt Jack down to his hideout that is hidden deep under London in the abandoned tunnels & stations of London Underground. This place is very close to home for me, London Underground has been my job for over 10 years.

It is the mantra spoken by Legion & the Five throughout the game & implies that they are united in their goals. Legion constantly refers to himself as “us” & “we” & during the final battle he quotes a piece of text from the bible:

“And he asked him, what is thy name?” And he replied “my name is Legion, for we are many”. This is taken from Mark 5:9 in the Christian Bible & refers to Satan.

Now add all of this with the way in which Legion looks & talks, the out of fashion dress & cane, the constantly bleeding mouth & the echo in his voice.

Legion is the devil…

Mike LeRoi is more than happy to share his thoughts with you especially when you enter a brand new area. He will go on a rant/speech about the area or Deadside in general all the while exclaiming the horror & terrible things that can be found there.

As well, Shadowman has an ego & consistently declares that he is ‘the lord of dead-side’ particular when collecting dark souls or killing enemies. His confidence in himself is infectious & makes the nasty side of Deadside all the more palpable to deal with.

2 – Strength comes from the dark…

One of the earliest quests will see you attempting to collect parts of an ancient blade that can blot out the sun making it night in Liveside. Shadowman has to do this as when travelling to the prison to deal with members of the Five he is human & weak as it is daytime there.

Try taking them on as Mike….you won’t last long & it can be quite frustrating as access to them is granted early implying that they can be dispatched easily. Once the blade is formed & the spell cast (the blade is plunged into Mikes chest) night drops over Liveside & Shadowman is unleashed upon the world. Time to go collect some famous Five souls…

All your exploration in Deadside leads back to one place, The Asylum. Built by the architect, Jack as a monument & safe haven for all the worst parts of Live & Deadside. You will visit it on many occasions & in different areas. From the horrific Playrooms to the Cathedral, Asylum is huge & by the end of the game you can’t help but think you barely scratched the surface of it.

Each location comes with its own threats, frightening music & rewards. Exploration is key but not possible without the gifts received from the temples. It is easy to get lost in Asylum but there is just one direction Shadowman is heading & that is the Engine Block. Silencing them is eerie as it’s almost like the heart of Asylum has stopped & when it falls in the final cut-scene you won’t be sorry to see it go.