When you’ve played a version of a game across many different platforms you are often asked just what your definitive version is. Which version would you recommend gamers go out & play?

The Legend of Zelda: Ocarina of Time 3D is the 3rd version of Ocarina of Time I’ve played & it is the definitive version. This is the version all gamers should go out & play.

If you want to read a review of Ocarina of Time that includes plot elements & gameplay please click here for the original game review. This is a shorter review of what the 3DS offers & expects you to know Ocarina of Time already.

The improvements made to an already legendary game were more than just a touch-up & 3D effects. Ocarina of Time 3D is a re-mastering of the highest order with gorgeous visuals & sharpness you never thought possible. The 3D effect works well & really stands out in wide, open environments.

Take a moment to admire the sun setting on Hyrule field with the 3D on…it is beautiful.

Ocarina of Time 3D comes with both the original game & the Master Quest (mirrored world/re-arranged dungeons) packaged into one which adds real longevity to the game. In addition there is a boss challenge mode that sees the player take on the bosses of the game in order or at the same time! The Master Quest also has a version of this that is much tougher.

Gameplay is pretty much the same to the original game but with a few changes here & there. The touch screen of the 3DS allows easier interactivity with the inventory screen & playing the Ocarina. Items can be assigned to buttons which makes switching equipment quicker & easier. The 3DS gyroscopic technology (aim the 3DS yourself – basically) is used to aim in first-person mode but it can be a bit clunky & the setting can be turned off.

The Stone of Agony which worked off the original N64 rumble pack (it vibrated when near a secret) has been replaced with the Shard of Agony which makes a sound instead as the 3DS doesn’t have a rumble feature.

The soundtrack was adapted & updated for the 3DS as well giving you the best version of the famous music yet.

It’s all minor stuff but it all helps make an already incredible game even better. 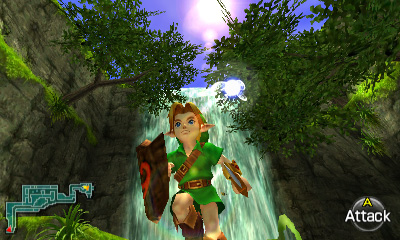 Haven’t played Ocarina of Time? What’s wrong with you!? Go out, buy a Nintendo 3DS & a copy of this game than lock your door, close you curtains & lose yourself in one of the greatest games ever made…made even better.

The Legend of Zelda: Ocarina of Time 3D