If you’ve played either The Simpsons: Tapped Out or Family Guy: The Quest for Stuff then you know what to expect from The Flintstones: Bring Back Bedrock.

Bedrock is demolished by a meteor-shower & it’s up to you to rebuild the town starting with the Flintstones house all with the help of the many Flintstone characters.

*sigh*…if you’ve played one, you’ve played them all & this is as un-inspired as the rest, maybe more so as progress is so slow. Let’s get this out of the way first…it looks lovely, really bright & colourful & combined with the music & voices gives a great representation of The Flintstones.

That’s about all I can say that is positive about this game…this game represents everything I’ve grown to hate about free-to-play games. No substance, no fun & hugely over-priced in-app purchases.

So the claim from the game is that you have to rebuild Bedrock except you’ll spend most of your time putting useless bits of furniture in the Flintstones house as there is little to actually build in Bedrock & other areas don’t become available until level 10, that’s if you’re not sick of the game by then.

Currencies come in the usual 3 formats: 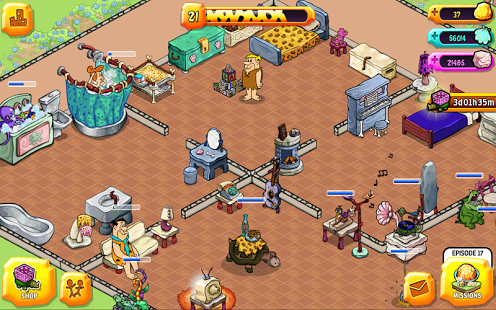 Log on to Facebook to get a free 50 but after that it begins to cost. The usual prices occur… £1.49 will get you 200 gold; £34.99 will get you 6000. Similar pricing exists for the other currencies but thankfully they come in decent amounts as completing tasks gift you a certain amount.

The biggest problem surrounding currency lies with the cost of items that you buy. Clemens the Clothesline costs 60,800 & I haven’t spent a clam for 5 days & I still only have 9681. See the problem? I get that the developer has to make money but this free-to-play model has reached insane levels of greed.

So what else can I say about a game that has pretty much killed any urge I have to play a free-to-play game again? The character tasks have conversation bubbles that progress the next chapter/story part. Other characters become available the higher your level is allowing you to set even more meaningless tasks. 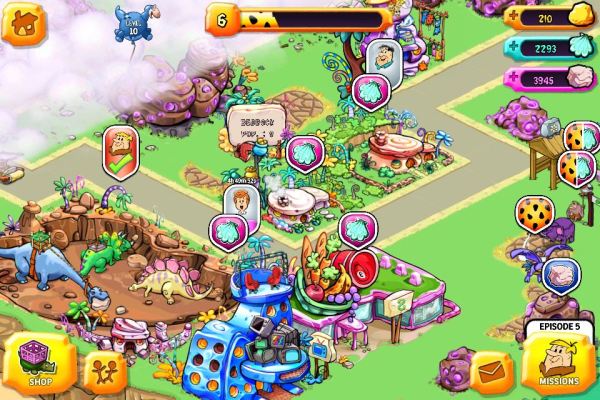 Just what is the aim in this game? To re-build Bedrock? Only at a cost it seems.

This is the 3rd free-to-play game in this vein that I’ve sunk too much time into it & I’m so done with them. Little actual gameplay, mixed with a feeling of pointless & the constant knowledge that it is led by pure greed. One of the worst mainly thanks to the irrelevancy of The Flintstones.

The Flintstones: Bring Back Bedrock