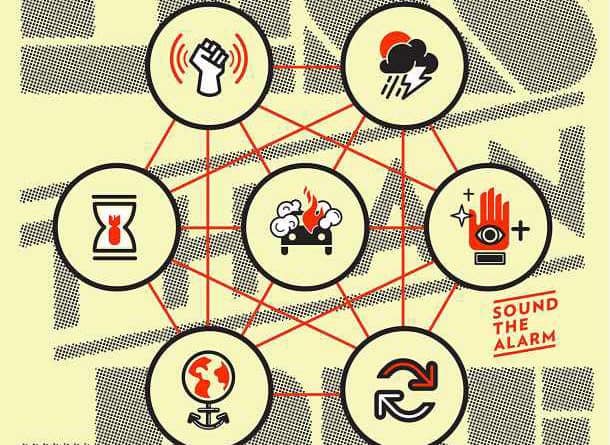 Less Than Jake’s Sound the Alarm was released on February 3rd, 2017 & marks the debut record for the band on Pure Noise Records & their first new music since 2013’s full length album, See the Light.

This short 7 track EP opens with the bass-led beat of Call to Arms, a straight-forward Less Than Jake song. Lacking in much of the ska elements that made them famous it’s hardly the most exciting of openers even if it’s a catchy little tune, in particular the chorus.

However things vastly improve with Whatever the Weather. A track that is built on an uplifting, catchy ska beat. Those elements shine here as does Roger Lima’s voice, turning the track into one you want to keep listening to over & over again.

There is no getting away from the reality that this is a Less Than Jake looking at all points of their career to make a piece of music that should please all fans. The up-tempo sound of Bomb Drop could easily fit amongst much of their earlier work. While this is a very positive sounding EP, you can occasionally pull out moments that fit nicely alongside the more sombre sounds of In With The Out Crowd.

Welcome to My Life is a great example of this, there might be more bounce in but lyrically it doesn’t sound that upbeat.

“Welcome to my life, so sad to say I’m sorry….to everybody”

It’s still a fantastic song though as the criticism thrown at the band during that part of their career was not deserved.

Good Sign is a so-so song that hardly excites, basic stuff with a standard riff & the occasional blast of trumpets. It’s followed by arguably the best song on the entire EP, Years of Living Dangerously. From the opening guitar work you know you’re in for a serious treat. It’s Less Than Jake at their absolute best.

Roger’s vocals are just stunning here, it’s the kind of song that you want playing while surrounded by your nearest & dearest with a big drink in hand, reminiscing about times gone by. It’s got a real emotional feel about it.

It really should have been the last track as Things Change just doesn’t manage to capture that same feel. It’s short, upbeat melody kind of detracts from the previous song even if it’s lyrical content is very telling about Less Than Jake themselves. It’s a perfectly fine song but would have been better placed somewhere in the middle of the EP.

So there you have it, 7 new tracks from Less Than Jake. A mixed bunch with some standard tunes & some outstanding others. Welcome to My Life & Years of Living Dangerously are two of the best songs the band have written in a very long time & make this EP essential to fans.

1. Call to Arms
2. Whatever the Weather
3. Bomb Drop
4. Welcome to My Life
5. Good Sign
6. Years of Living Dangerously
7. Things Change

You can find out more about the band & pick up the new EP over on their official website here.