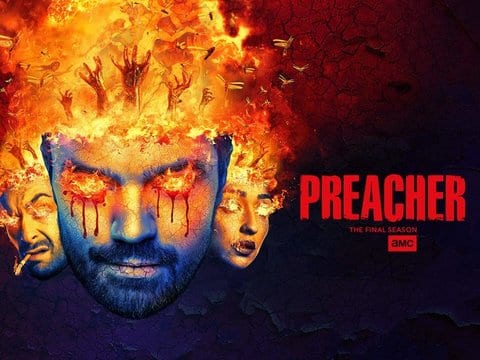 “Yoga, eating, talking about books we like… Pleasuring you with my anus… I don’t think you’ll get that kind of offer in paradise.” – Herr Star

Preacher is an American television series developed by Sam Catlin, Evan Goldberg, and Seth Rogen for AMC starring Dominic Cooper, Joseph Gilgun and Ruth Negga. It is based on the comic book series Preacher created by Garth Ennis and Steve Dillon, and published by DC Comics’ Vertigo imprint. The series was renewed for a fourth and final season, that premiered on August 4, 2019.

As our story inches closer to the finale, God’s endgame for the universe begins to click into place. Trapped between heavenly prophecies, hellish prisons, and all-out nuclear war, Jesse, Tulip, and Cassidy make their bloody way to the Most High. Whether they can reach God in time — or whether all this carnage is part of His divine plan — will soon be revealed as Preacher barrels towards the end of the world.

I never imagined Preacher would get one season, let alone four. So, to have experienced them at all has been a genuine pleasure, despite any negatives. So, here we are: truly at the end of the Preacher world, with season 4.

I’ll start off immediately by saying that Season 4 is the best season so far. A culmination of everything we’ve been working towards, that delivers on all its storylines. The whole season felt very different to the others that came before. It was darker, more emotional and had more depth. This made the funny moments funnier and more memorable. Although, it started off slow – with its classic pacing problem other seasons have suffered from – it picked it up and progressed nicely, rather than stagnating like it had in the past. 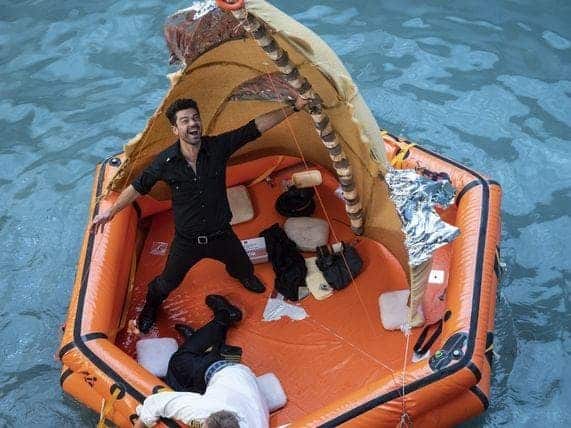 The effects were realistic and the acting was great, although some accents were hit and miss (*cough* Tulip *cough*). I found I enjoyed the God storyline, albeit it’s convoluted nature (but isn’t that just “God” in general?). His and Jesse’s scenes were perfect and God’s portrayal of being a spoilt, egotist was just right. Speaking of Jesse, as usual he’s best alone. I’ve never bought the so-called chemistry he had with Tulip (even before their breakup in real life) and found Tulip had much more on-screen chemistry with Cassidy. Additionally, Tulip is just downright unlikeable in this season. She uses Cassidy, lies to Jesse and unashamedly commits bad acts, and then judges others for doing the same. I have to admit though that one of the best episodes of Season 4 was Tulip, Cassidy and their “son”. I never wanted them to leave that cabin.

Across the entire show, Cassidy has always been my second favourite character (the first will be explained in due time). He’s funny, but he has so much emotional and weakness inside. This season we finally got to experience his back story on screen, and it invokes so much sympathy for him. Before this season he was a fairly shallow character, so I appreciated the depth he was given on his journey towards the finale.

Now, onto my favourite character, from the moment I first saw him: Herr Star. They absolutely struck pure gold with him. From start to finish he’s a show stealer. He has the best lines, best delivery and is so fucking hilarious. You want him to get away with it all, and never get caught. Bra-fucking-vo Pip Torrens, you legend.

The characters across the show and final season have mostly all been a delight to watch. Some final ones are, Saint of Killers. He’s absolutely fascinating and you know when he’s on screen, shit is gonna go down. And Eugene, although his story was intertwined with a character I didn’t care for (Hitler), his portrayal is well done and his ending is inspiring.

Preacher does what you always want in a finale, and makes it so it’ll be remembered fondly. Its final moments and the conclusions of its characters are satisfying, leaving only small questions.

My only negatives are again, some small pacing issues. I also found Featherstone to be an ultimately useless character and was pretty disappointed with her ending – although the actor played her well, the character just sucked and was only enjoyable when being played off by Herr Star.

Overall, hit and miss, as all the season have been but the ending ensures you won’t want to bury it in the recesses of your mind like other shows that have come before it. I enjoyed the change of tone, and appreciated finally getting something a little darker for the end.