Ever wanted to be the dictator of your own island? Ever wanted to be known as El Presidente & have a whole city worshiping at your feet? Well in Tropico 4 all your dreams can come true provided you & your people are willing to work for it.

Tropico 4 is city building simulation that puts you in the role of El Presidente. The games campaign takes place over 20 missions & is divided into 3 acts.

The first sees your character, El Presidente working to build up the perfect nation before being framed for the murder of the US president. The second act sees El Presidente assuming a new identity & discovering he was victim of a massive conspiracy & sets about getting his revenge. The final act is El Presidente back in power, discovering the true mastermind to the plot to oust him before building the ultimate Tropico paradise.

While El Presidente is the character you can customize his or her look as well as add traits & qualities that can have different effects on factions & relationships.

Each campaign mission is varied & interesting with a really well balanced difficulty. You see, Tropico is all about balancing the needs of everyone. From the lone citizen to the super power of the USSR, everything needs to be addressed & at first it is incredibly over-whelming.

You’re given a certain amount of money from the start & you need to ensure you get regular income by exporting goods. Build farms, mines & oil refineries to get money flowing through your island. Money is one thing but your reign won’t last if your people are unhappy. Ensuring they have plenty of food, good healthcare, religion, housing etc. is key to ensure they don’t join a rebellion & try to get you out of power.

That is just one way in which you can lose a game…throw in potential coups (keep your troops & generals happy), invasions by foreign powers, natural disasters, debt & there is plenty to keep you on your toes.

Thankfully the pacing of the game is excellent & before any major demands are made you will have gotten used to the controls. The ability to move the camera & cursor in any direction & zoom in & out makes seeing everything super-easy. Unfortunately once your city begins to expand the game has some frame-rate issues that cause some annoying stuttering.

The ability to play the game at different speeds is incredibly useful & ensures you’re not just sitting around waiting for stuff to be built or exports/imports to arrive.

It has to be noted though that as challenging as the game can be there is a process that once mastered makes each map/mission straightforward. The mastering of exports is easy & the only real challenge comes from reaching the level objective.

As well as the main campaign there are a number of pre-configured maps to play as well as a random island generator. Challenge maps add even more replay-ability to an already full offering & additional DLC that adds modem buildings, new maps & another 12 campaign missions. 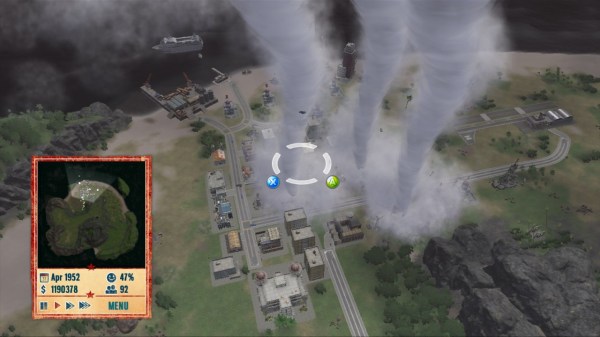 Tropico 4 is incredibly addictive game that rewards the effort you put in. It’s far from the prettiest game even if it is quite detailed & the frame issue above is annoying. The game has been known to freeze at times & a really huge city save file will crash when attempting to load it up.