Such a movie rarely exists….in fact up until recently I was convinced that such a movie couldn’t exist. I’ve seen the worst movies in the world (I watch a lot of horror) but I can always find some redeeming feature be it the smallest scene that elevates it momentarily.

Yes, ladies & gentlemen this review is for the worst movie I have ever seen. A movie with no redeeming features & nothing I can defend.

The Wicker Man remake is an abomination. It is so bad that it has actually affected how I feel about the original. How could such a smart & unique horror movie spawn such an atrocity…is this the work of the devil?

In no way is this review going to objective…I’m going to rant for the next few paragraphs about how bad this movie is….

Patrolman Edward Malus (ya know like phallus?) played by the internet favourite Nicolas Cage is recovering after a road accident involving a little girl & her mum. They went up in flames while Edward tried to save them. I think the little girl totally deserved it by the way; she was a nasty piece of work.

Anyway out of the blue he receives a letter from his ex-fiancé, Willow who left him a long time ago. She wants Edward to come to Summersisle, a remote island & help her find her lost daughter. Edward has got nothing else going on so he decides to go off to help her. 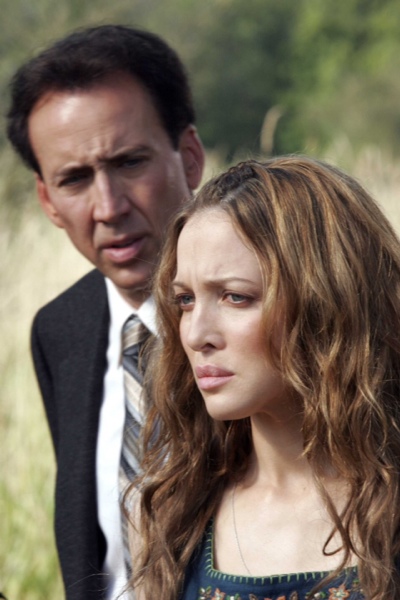 When he arrives at the island he discovers a strange community of women who are into some wacky rituals & planting fruit. Seems like the yearly harvest is super important & all the men are under the thumb. Edward meets a very hostile reaction to his questioning which he fails to take well…shouting at kids is never the way forward.

His ex-fiancé who spends 90% of the film looking confused & worried (probably knowing her career was going one way after this) reveals that the missing kid is actually Edwards. I can only think they included this plot device because they thought the audience needed to give a shit more. It didn’t work…

The entire middle of the film sees Edward running back & forth around the island landing in scrape after scrape & not really getting very far. There is an absolute doozy of a scene where he thinks the kid is lying dead in the water under the pier. He dives in to get her but it turns out to be a dream & he wakes up on the pier only to have the dead girl in his arms….then he wakes up again. The good old double dream thing…Edwards reaction to this was almost exactly the same as mine…we were both shouting “god-damn it”.

A couple of rubbish attempts at jump scares & Edward being mean to women & suddenly were right near the end of the movie. 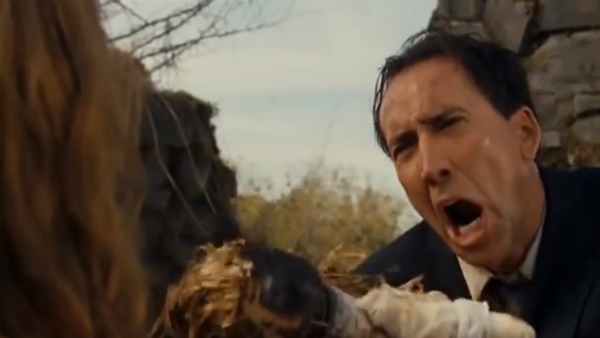 Now I’m presuming you have seen the original Wicker Man or are at least aware of the big twist. If not, stop reading & go & watch The Wicker Man….no, not this version of it, the original, it’s amazing.

Right for the rest of you…

So Edward attempts to rescue his daughter during the harvest festival & runs off into the woods with her only to have her lead him straight back to the waiting crowds. It turns out she isn’t the sacrifice…he is! It was all a set-up!

Why? Well it comes down to the fact he is a cop & related to the island through the kid. Let’s just conveniently overlook the fact that the few men who do exist on the island are used for breeding (head lady tell us this during a very long speech) so could answer the call of being connected to the island inhabitants. Ah well…they beat Edward up a bit & then stuff him inside a giant Wicker Man. His darling daughter then sets it on fire….

Having to listen to Nic Cage scream for what felt like an eternity was too much; I think he was screaming for all of us. 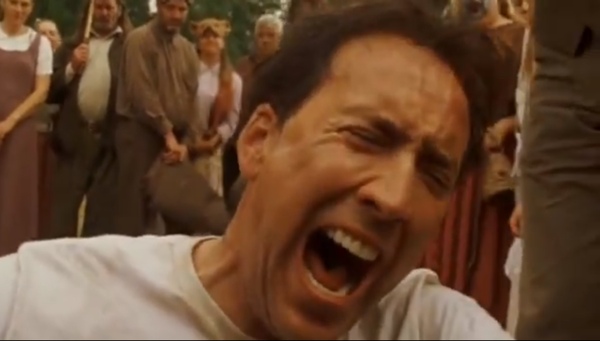 The change from paganism to failed harvests/female domination was a terrible idea & made it the whole burning man ending seem a bit extreme. The film only slightly touches on the sexuality side of the island something that was super important in the original. In fact it was integral to the story as our hero was a devout Christian virgin & this was a major motivation for him being chosen as the sacrifice (and who could forget the nude dance scene).

So much has been played down in this horrific remake that it was granted a 12A certificate in the UK. No horror movie should come with a 12A cert….

The Wicker Man remake is often referred to as a ‘it’s so bad it’s good’ movie. I think that is completely unacceptable & offensive to movies that do deserve the tag (Masters of the Universe is the one that always comes to mind). The reason is often cited as Nic Cage’s acting & some of the strange decisions throughout the movie.

I’m a fan of Cage & enjoy him many cheesy roles but this is a step to far, he’s not funny or interesting & I couldn’t wait to see him burn at the end. This is the movies hero & here I am cheering on the women breaking his legs.

The parade scene that sees Edward dressing up in a bears costume to hide amongst them is often used as a source of amusement to fans of the film. I don’t understand why…I mean the parade involves them dressing up as animals or birds & Cage steals a bear suit to blend in. Is it stupid? Yes but so is the entire film, is it funny? Of course not.

Thing is it’s not all Cages fault, the script is dire & his co-actors even worse. Ellen Burstyn who plays the role of Sister Summersisle (similar role played by the legend Christopher Lee in the original) is awful. She doesn’t show up until the final 3rd, is used to explain most of what has been going on & talks for around about an hour of the movie. Ok…its more like 15 minutes but it felt like a lot longer! Her Braveheart face-paint at the end looked so damn lazy.

Remakes are lazy & if you are a director tasked with giving a different spin on a classic story you need to work really hard at it. No-one involved here should be happy with what they did here.

The single worst movie I have ever had to endure & I have seen some absolute steamers. For me there are no redeeming factors for this movie & I don’t care if Nic Cage puts his heart & soul into the role…it’s still shit.

To damage the name of The Wicker Man in such a way is unforgivable & I would hope anyone foolish enough to have seen this remake without seeing the original will strive to see why it is loved. The changes made throughout do nothing to improve upon the movie, in fact they make it worse & you will rarely hear me say that the lack of sexualisation throughout is a problem.

Please, if you know what is good for you…avoid this film.