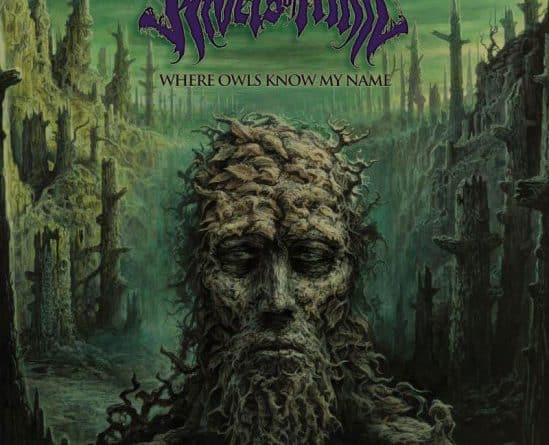 Rivers of Nihil today are Jake Dieffenbach on vocals. Brody Uttley is joined by Jon Topore on guitar duties with Adam Biggs on bass and backing vocals. Finally, the band have added Jared Klein on drums.

Rivers of Nihil have built up a strong reputation with their early releases. They are definitely a band that shatter the mould. While there are obvious nods to their peers, they are a progressive and creative band. They take influence from many genres in and out of metal and Where Owls Know My Name will be no different. In fact, it could be even more inventive and creative than it’s predecessors.

In their own words “The band has delivered an album which is often just as punishing as its predecessors while assimilating ingredients from musical genres as varied as electronica, jazz, alternative, folk, and the golden age of Shrapnel Records. The resulting music is indescribably progressive, a multifaceted soundscape that goes beyond the wildest dreams of even the group’s most ardent admirers”.
Well, our first glimpse, The Silent Life, certainly showcases this multifaceted sound and it really works. It is a long track at just over 6 and a half minutes and the gives the band time to send the listener off in many directions as the song switches direction regularly. The Silent Life makes a mockery of it’s own name at the start as we open to a wall of crunching noise. Crashing drums and pounding guitar notes give the listener no time to prepare as we are slammed instantly into the nearest brick wall. Jared Klein’s drums are perfect with pummelling rolls underneath the wall of noise, really standing out.
The noise fades into a sludgy beat with a slow picked riff intermittently interrupted by a quick drum blast and guitar slam. As the song settles into a dark and steady riff, the drums step up another notch playing at almost unbelievable speed. The vocals come in and they are harsh and rasping with plenty of power. The guitar line underneath the ominous heaviness almost has a metal gaze quality to it. The verses keep getting faster and keep getting more intense as they build into a pit destroying frenzy when suddenly, peering out from the dark clouds like a ray of sun comes a clean and introspective guitar note.
That guitar note heralds the start of a melancholic, gentle guitar solo with strong blues influence. The blues influence switches to jazz when, unimaginably, a saxophone joins the guitar for a dual solo that should sound out of place but fits like a glove. The drums come blazing in playing along with the sax in mesmerising fashion. It really is something to behold. As the lengthy but hypnotic melodic section closes we explode back into brutality with a blast of bass and drums and a fast chugging guitar riff. The vocals roar back in and throw some extended screams and roars into the mix as well.
This power and passion continues to pummel you right through to the end save for a slightly slower, groove like chug as The Silent Life comes to a close.
I am genuinely quite breathless and awestruck by the sheer size and scale of The Silent Life. To call it progressive, creative or inventive seems to be a disservice. This is a track so chock full of brilliance it almost seems unfair on bands around them. Brilliantly brutal metal with a sombre edge followed by a seamlessly integrated sax solo back into metal with enough power to make every hair on your body stand to attention. The Silent Life is a special, special song. I am insanely excited to see what else Rivers of Nihil have for us on Where Owls Know My Name. Whatever it is, I am confident it will be different and unexpected. I am also confident it will be brilliant.
Check out this exceptional track, The Silent Life, over at Metal Blade’s YouTube page here. Head on over to Metal Blade here for a preorder bundle of the new album, Where Owls Know My Name. You can also grab the single and other work from Rivers of Nihil at the links below. Find out more about this talented bunch at their Instagram page, Twitter or Facebook. Be sure to give them a like or follow while you are there.
[amazon_link asins=’B078XXC7WR,B078XXC7YR,B010FP0W66,B00EV1AT8C,B01M8Q7J1J,B0782SP24H’ template=’UseThisOne’ store=’g0e5b-21′ marketplace=’UK’ link_id=’bb249da8-0ead-11e8-a16f-29491fbdb6c8′]