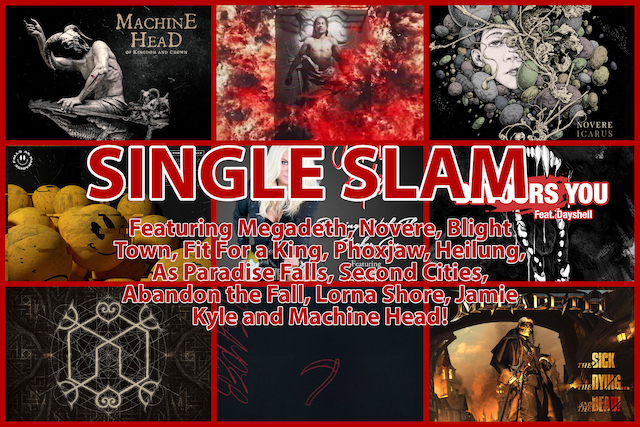 This week’s single slam features Megadeth, Novere, Blight Town, Fit For a King, Phoxjaw, Heilung, As Paradise Falls, Second Cities, Abandon the Fall, Lorna Shore, Jamie Kyle and Machine Head! You can read our thoughts about the latest singles from these bands below.

Megadeth – We’ll Be Back

Thrash Metal pioneers Megadeth will cap a summer of successful global touring with the release of their highly anticipated 16th studio album, The Sick, The Dying… And The Dead! via UMe on 2nd September 2022.

The first song to be released from The Sick, The Dying… And The Dead! is ‘We’ll Be Back’ which is accompanied by the world premiere of ‘We’ll Be Back: Chapter I’, an epic, action-packed short film chronicling the origins of Megadeth’s mascot, Vic Rattlehead.

Always known as a polarising band, something that has been even more prominent in recent years, this single is going to shut a lot of the naysayers up. Classic Megadeth, thrashy and fast, massive riffs and erratic soloing, chunky drums and Dave’s inimitable vocal snarl. Everything is on point here and it’s one hell of an enjoyable head-banger.

After releasing their first EP, Soulless Elements, at the beginning of the year, Novere is back with their new single, Icarus. A one-track story about rejecting dogmas which limit and dwarf our human existence. These social, political or religious constraints tear our minds as invisible chains, and drive our paths like a yoke.

Booming melancholy, Novere deliver an eight-minute post-metal epic that soars as high as Icarus did but also plunges the listener into the cold depths below. The contrast is startling but makes a lot of sense as the melodies are icy and when Novere heavy things up, it’s weighty and substantial. It’s a sign of a sure-fire winner when eight minutes fly by. The blur of Novere’s post-metal is tinged with shadows but you’ll happily welcome them into your mind. Check it out here.

UK Alternative outfit Blight Town have released their latest single ‘Swerve’ ahead of their appearance at Tech Fest 2022.

A very interesting amalgamation of alt-rock, technical proficiency and melodic catchiness, the surprising thing about Swerve is just how complex and accessible it is. Two things that normally don’t go together but Blight Town’s abilities to make it work speaks for itself on this release. A marvellous example of heartfelt, memorable and interesting alternative music. Check it out here.

Fit For a King – Reaper

Fit For a King have a busy remainder of 2022 ahead of them — a new album and major US tour with I Prevail and Pierce the Veil are on the horizon. Before that though, the Texas band has dropped the video for the brand-new single ‘Reaper.’

In the studio, I became obsessed with a German TV show called Dark. The show really had me reflect on how finite our time on earth is — that we have no control, no matter how rich, religious, or diligent. Time is truly the Grim Reaper.

Very much a Fit for a King song, Reaper is chunky, heavy and pit-inducing brutality. The band digging deep into their deathcore roots to pull out the squirming entrails of what heavy is supposed to be. The highlight? Check out that freaking breakdown at the end if you fancy having your neck and head destroyed. A kick ass track.

The sun is quite literally gonna burn us all one day, you can take that in two directions, a super nihilistic view on things served with a smile, or as an opportunity to hold the things you love close and cherish them. With very pagan-esque themes, the bouncing and upbeat track takes bi-polar twists and turns into something darker and heavier, whilst still preserving the same chaotic Phoxjaw energy presented on previous releases. We hope this track digs deep into your brain and burns out your eyes.

A guaranteed bout of eccentricity, Phoxjaw are a delightful band and with this new single, they continue to show just how unique they are. A wacky, trippy, powerful and thrilling piece of music that shifts and changes in an instant. Calling it fascinating is an understatement as it is borderline ridiculous at times. Yet that is Phoxjaw in a nutshell and we love them for it. Check it out here.

Enigmatic world music collective Heilung have unveiled their new single/video ‘Anoana’, the first glimpse of their upcoming new full length Drif, to be released 19th August via Season of Mist.

In ‘Anoana’, the listener has the chance to delve into a collection of likely encoded spells from the Migration Period and get a touch of magic from the Dark Ages. The intention of the piece is to playfully reconnect to an incantational language of a period where the North was richer in gold than any other region. Our forefathers presumably enjoyed a time of great prosperity and it may make us rethink how dark these ages really were.

Enigmatic and electrifying, Heilung return with a breath-taking example of how symbolic, ancestral and spiritual their music is. A mix of power and fragility, the innate beauty of this track hides a suspenseful experience that is more ‘score-like’ than anything else. A dynamic listen, thanks to the crisp and clean modern production, this is a bit of a masterpiece.

Australian deathcore metal band As Paradise Falls have just revealed a new music video for their new single “Bats”, as well as announcing the availability of pre-orders for their upcoming EP album Madness / Medicine which is scheduled to be released on September 23, 2022 via Eclipse Records.

Bats was one of the first songs to be written during the demo process and it actually was one of my LEAST favourite songs as other tracks were written. We were close to doing a re-write or just scrapping it altogether. However as soon as we did a second demo and then added the vocals, it just came together. Now, it is easily one of the most hard-hitting songs we’ve written, and I am so proud of how this track came out, and how my vision came to life.

When I heard the demo of Bats for the first time in Danny’s studio, I immediately knew this was going to have that dark, bouncy groove I could really blend with. Lyrics started flowing, mixing themes of witch trials/hunts with current issues surrounding cancel culture. Without much conscious thought, Bats became the purest form of modern APF: hard hitting, oozing with groove, and just bullshit heavy.

An ear-bleeding blast of deathcore, As Paradise Falls deliver one hell of a slap to the head with this beast. The chunkiness is gurn-inducing stuff and it’s unrelentingly heavy, which is saying something when you consider deathcore rarely pushes the limits these days. That doesn’t apply to As Paradise Falls though as they seem to have dug just a little bit deeper to unleash an absolute crushing effort. Check it out here.

Second Cities have been threatening an explosion in popularity for a while now and with this new single, it seems as though it’s about to finally happen. Thanks to one of the best tracks that they have ever produced. A track that is melancholic and melodic but with enough force to get you moving and head-banging too. The whole package is incredible here but the heartfelt and passionate vocal performance deserves special mention. That chorus… phenomenal.

‘Devours You’ centres around themes of toxicity, seeing someone go down a dark path while trying to drag you into it.

One of the coolest things about this track is the idea of having a ‘back-and-forth conversation’ between the two vocalists that centres on the titular person. Trying to help them and not being consumed by it themselves. Fascinating and done so well, it’s just one thing that makes this one hell of an anthem. Aside from that, Abandon the Fall combines foot-tapping rock groove, powerful choruses, catchy melodies and just enough fire to get the blood pumping nicely. Check it out here.

Lorna Shore – Into the Earth

One of metal’s most exciting artists will show a peek of what’s to come in the next step of their career. Lorna Shore have dropped ‘Into The Earth’, their newest single and second track from upcoming album Pain Remains which is due for release in October.

Into the Earth is about the initial fear and acceptance of the subconscious whilst falling into a state of lucid dreaming.

As brutal and savage as ever, Lorna Shore bring deathcore kicking and screaming into the modern times with a blistering and cinematically-tinged heavyweight listen. The blend of raw aggression and melodies, most of which sit right at the back, is incredibly listenable. Yet, there is very little in the way of accessibility about this. It’s just too damn heavy and fast to appeal to the masses even if Lorna Shore are delivering an absolute banger here.

Jamie Kyle – Driving with the Brakes On

Trailblazer for women in rock, Jaime Kyle announces her brand-new album ‘Wild One’ and its first single ‘Driving with the Brakes On’, featuring Kris Barras. The album will be released this Autumn on Conquest Music and the single is out now.

Two names that can excite before you even press play, Jamie Kyle is a legend in her own right but then you have Kris Barras dropping in too. The track is what we like to call a ‘foot-tapper’, where inadvertently, your lower limbs start to move and no matter how hard you try, you can’t stop it. Such is the infectious quality of this blues-infused rock number. The chorus is a particular high point as it’s a pure singalong. Check it out here.

Machine Head have dropped the mammoth new track, ‘Unhalløwed’, along with an accompanying video shot live from the band’s Electric Happy Hour series. The track is lifted from the band’s tenth studio album, ‘Øf Kingdøm And Crøwn’ which will be released via Nuclear Blast/Imperium Recordings on August 26th, 2022.

Drowning in the deepest depression of his life, Eros is at a breaking point. Collecting heartaches, loss, and near psychotic isolation, ‘Unhallowed’ is the beginning of a powerful shift of our story. An introspective narrative starts the song lyrically, which is a collaborative effort written by myself, guitarist Wacław ‘Vogg’ Kiełtyka, and bassist/backing vocalist Jared MacEachern and encapsulates the collective strength of this writing team.

Anchored by an absolutely monstrous groove, the vocals melodically mirror the state of mind of Eros as he reels from the loss of his mother to a drug overdose and begins a slow downward spiral into madness. However, the culmination of the track infuses some much-needed light, but will it be enough?

A monumental effort from Machine Head, one that features some affecting vocals and lyrical content, amongst incredible harmonies and massive riffs. It’s very much Machine Head, especially when it heavies up, but it’s also got some interesting tone shifts that shows the new writing team is imaginative and willing to change things up for a fresher edge. Mournful and melancholic, it’s a track that stays with you long afterwards.