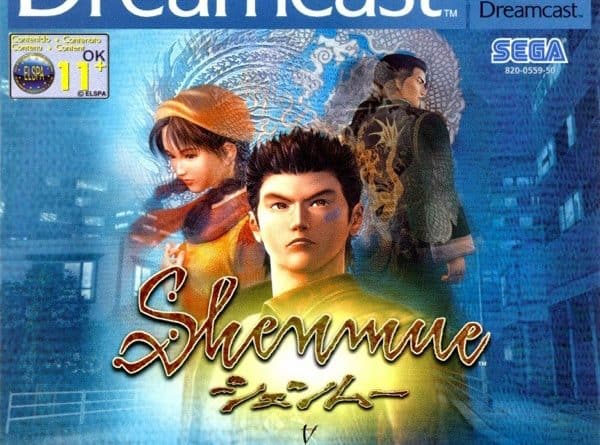 I’ve been both excited & apprehensive about writing a review for one of my all time favourite games. On the one hand I want to be objective & recognise its faults as well as its brilliance but I’m all too aware I might just come off sounding like an obsessive fan-boy. Here goes…

Shenmue tells the story of Ryo Hazuki who on a cold winters day in the 80’s in a small village in rural Japan witnesses his father being killed by a man known as Lan-Di over something called the mirror. Shenmue’s opening scene ends in the epic fashion it began with a clearly heart-broken Ryo clutching his fathers body screaming Noooo!

This life-changing event starts the story ball rolling & immediately makes you care about an outcome. Ryo wants revenge, he wants an explanation but he doesn’t know how to get it. This is where we come into it, we will control Ryo as he explores the near-by neighbourhood, town, shops & eventually docks all in the quest to find out why his father was killed & where the men who did it, went. In Shenmue you have a notepad that is filled in as you explore & talk to the characters of the Shenmue world. People you talk to will give information about a specific event Ryo is asking about. For example further into the game you will need to find out where sailors hang-out so you can find information about the docks from them. Asking the folks around the town will hand you lots of information of which you can decide which to investigate. How much information you gather is up to you & it makes you feel in control. The thing is even after gathering the information you don’t have to rush off & use it which brings me to my favourite thing about Shenmue….the freedom. Ok, it’s not as open-world as some would have you believe. You are stuck in a few areas even if they are large areas but you have the freedom to spend your days as you wish. Ryo can get up in morning, wander around his house, spar in the dojo, go feed a local homeless cat, talk to neighbours, go visit his love-interest, play some arcade games, spend money on toys before going home to bed. Day becomes night, sunny weather becomes rain or snow…it feels so authentic & is the highlight of playing Shenmue. A lot is said about Shenmue’s dynamic weather system because of how revolutionary it was. It truly is amazing, no persons days will be the same, my October 5th might be overcast with rain in the evening, yours could be raining all day before becoming a clear night. It’s random, very impressive & the first time I got Ryo out of bed & stepped outside to heavy snow is a treasured gaming memory.

Let’s talk quick time events….as a lot of Shenmue is made up of them. Nowadays this sort of practice is frowned upon by gamers but back then QTE’s were new & Shenmue was one of the front-runners. They range from fights to dodging stray footballs to moving around people in your way as you chase someone down. They are plentiful but not so much that they became annoying…In fact most are quite fun & are not to difficult. It feels good when stringing a QTE together as Ryo ducked & dodged around unsuspecting NPC’s.

Talking of NPC’s Shenmue has some of the most diverse in any game, there are loads all going about their business & with plenty to say should you ask. That their responses change depending upon what Ryo is enquiring about is good & it makes their clearly scripted paths seem more authentic. The only problem is the voiceovers which range from amusing to god-awful, it’s easily overlooked & just adds to the charm of the game as a whole. The final third of Shenmue is where the game really excels, when you get your job at the docks. It means you spend your day moving boxes around before spending your evening exploring the docks. It’s a noticeable chance to the local town as many more people are hostile & fights become more frequent. Shenmue’s fighting system sees you taking on many numbers of enemies at once. Ryo is skilled in martial arts & later on in the game he will find characters that can add to his arsenal of moves. There are plenty of areas to practice your skills in the game so if you don’t feel up to speed make sure you visit the park or dojo. You might just need the skill come the end….

Shenmue’s ending is satisfying enough as it leaves the game wide open for a sequel (which already exists).

So lets talk negatives of which there are few….

Controls…they can feel a bit iffy when not used to them, the default sprint button is the left trigger which is awkward but can be changed in the menus so is a minor complaint.
It’s aged a bit….bear in mind in came out in 1998 though.

Err…..it’s not a finished story, SEGA dropped it after number 2 but constantly tease about its future.

That’s about it. I guess the last thing I can add to this review is this picture that always makes me laugh: Have you seen this boy?