If there is one thing that I’m sure we can all agree on it’s that The Purge movies are overrated. I’m a fan of the concept but I don’t feel it has yet reached anywhere near to its potential. The franchise seems satisfied to put out average movies that entertain but offer little else with close to no re-watchability. The Purge: Election Year is the third film in the series that looks to focus more on the political & social ramifications of a world with a single night a year in which any crime is legal.

Charlie Roan is a Senator who is gaining ground over her pro-Purge opposition. She was a young woman when family was murdered during the Purge, 18 years ago. Charlie is naturally viewed as a threat. With the annual night of carnage just around the corner, she might be in a spot of bother. Meanwhile, Roan and Owens attend a debate. while Owens states how America’s crime rates are lowering. Roan gets a standing ovation after she declares the Purge only serves to eliminate the poor and benefit the rich and powerful.

Coincidentally (obviously not) a rule is suddenly changed that usually protects government officials from being killed on the fateful night. That’s one half of the story in the film, the other focuses on a local shopkeeper (Joe) who has worked hard for what he has. A teenaged shoplifter named Kimmy and her friend both attempting to steal a candy bar. Later, an enraged Joe discovers that his Purge insurance rates have been raised beyond his affordability, prompting him to stake out and guard his store. 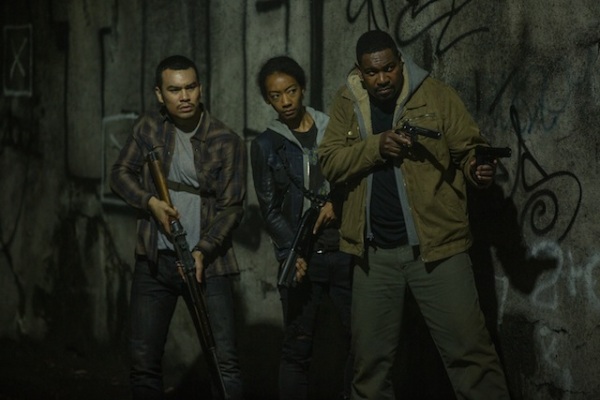 Elsewhere, Roan decides to wait out the Purge from her unsecured home. This is in order to secure the popular vote of the common people. Her head of security, former police sergeant Leo Barnes, initially disagrees with the idea but accepts her reasons. He then revamps security and has Roan’s house re-secured. New barricades and surrounded by secret service agents and SWAT snipers standing watch outside. the annual Purge begins and everything starts to fall apart. Roan and Leo are forced onto the streets by an attempted assassination.

Meanwhile, Joe has his own issues as Kimmy and her friends return intending to destroy his store. Things continue to spin out of control as you can imagine. Roan must survive the night in hopes that she can win the election and put a stop to the Purge once and for all.

I’ll say this; if you enjoyed the previous movies in the series then I see no reason why you won’t like this film. It doesn’t change things up or anything. It does focus on a different aspect of the Purge. Unfortunately, it is exactly what you would expect it to be, such a shame.

I think my biggest issue with this movie and the others is that it takes itself way too seriously. Election Year does this much more than the others with way more political metaphors than necessary. I actually do think it has quite a smart approach with Roan being a survivor of the Purge who wants to put a stop to it and the politics involved but does anyone watching these movies even care? I have my doubts.

These movies are mindless entertainment to me so stop trying to make a statement. I’ve always found it hard to take the movies seriously due to the often cringe-worthy goofiness of the people partaking in the purge. Constantly seeing characters seemingly reach orgasm over the prospect of “purging” is simply hilarious, what even?

Thinking about prospect that your neighbour could decide to kill you on the night of the Purge. Even if they were generally a decent person is a scary prospect. This is something the first film executed quite well. Instead it looks like everyone is out doing their best impression of the joker on crack, it’s over the top and therefore not very scary.

The Purge: Election Year is exactly what you would expect it to be. It somewhat attempts to tell a story with a bunch of forgettable characters that make terrible decisions but who cares! There are half naked people menacingly slo-mo skipping (not a thing, skipping is never menacing) wearing stupid masks. If you have nothing else to watch then throw this on. It has a couple of moments that are decent, some nice imagery and you’ll hear the word “Purge” used more times than I’d like to remember.