After the moderate success of Warlock (1989) it seemed inevitable that we’d get a sequel to the late 80s horror/black comedy and in 1993 we did. Warlock: The Armageddon is a sequel in the loosest terms; in fact there are so many timeline/plot inconsistencies between this film and the original Warlock that it’s much easier to look at each movie as standalones. After recently watching both films I certainly believe this to be the case, many people have even speculated that the Warlock (Julian Sands) seen here is an entirely different one to the original or one from an entirely different timeline. Also, Warlock: The Armageddon is not written nor is it directed by the people that worked on the original, However, it is directed by Andrew Hickox who last directed Hellraiser III: Hell on Earth….It would be easy to just say that they completely disregarded the first film and everything that takes place. Knowing these things, can this sequel be anywhere near as good as the original?

In the distant past, Druids have stopped the rise of Satan’s son using magical rune stones that create light to vanquish the darkness. While the druids perform a ritual upon a woman Satan has selected, they are attacked by Christians who feel their work is Satanic. Most of the Druids die and the rune stones are scattered.

In the present, we’re introduced to Kenny (Chris Young) and Samantha (Paula Marshall – Hellraiser III: Hell on Earth) who’re in love but having issues with their relationship. It’s soon established that Kenny’s father and two friends are druids but not just any druids, druids with force (Star Wars) like powers. Samantha’s father who’s a priest has distanced himself from his former druid friends and neglected his responsibilities as a druid. I should really attempt to go a single sentence without saying the word “druid” but I don’t know how else to describe them.

Elsewhere, a young woman has possession of one of the runes due to it being passed down through her family. She’s preparing for a date when suddenly she becomes fixated on the lunar eclipse and stares longingly at the moon. Before you can say Julian Sands she gives birth to a hideous creature that turns out to be the Warlock. He toys with the woman, expressing “Don’t you want to give your boy a kiss, mother.”

He kills the woman and then peels the flesh from her stomach to use as a map to find the remaining rune stones, it’s the 90s Warlock’s equivalent to the modern satellite navigational device. If the Warlock were to collect all 6 of the stones, he would have the power to open a gateway to hell and unleash Satan upon the planet.

Knowing of this impending doom, Kenny’s father does the only sensible thing he can think of and that’s to blow his son away with a double barreled shotgun. In actual fact, doing this means that Kenny will be reborn as a druid warrior and it’s the druid warriors who are meant to battle the Warlock and foil his plan. They seem to have some kind of sparkly plant that has the power to heal any wound even if the person happens to be dead, they should really consider sharing that secret with the world.

Anyway, the Warlock manages to get his hands on another stone in quite amusing fashion and then continues his journey. He murders a New York City taxi cab driver and then uses his powers to force the decomposing body to drive him across country to the next stone.

Kenny begins his training as a druid warrior which basically entails him using the force….. I mean his powers to control inanimate objects badly and set the wrong things on fire, all of this takes place with a rip-off Star Wars soundtrack playing in the background.

Remember how in the first movie the Warlock was vulnerable to nails being hammered into any footprint or indentation that he’d left behind? Well, it seems that if you take a blue wooded pen; dip it in the ink of mandrake juice and stab it into a leaf during an eclipse then you’ll be well on your way to stopping a Warlock. The druid that does this doesn’t realise that it’s working but it actually is and I’d say that had he known this, he may have killed the Warlock there and then.

After killing a really stupid gas station attendant, the Warlock continues on and gains another two rune stones. The first comes from a circus owner who is left trapped inside his own hall of mirrors and the second is from a collector of rare artifacts after the Warlock promises to give him a rare item if he parts with it. That’s another thing to note, the Warlock cannot take the stones from the people who own them; it must be given to him and so he creates ways of forcing them to give it up. It’s quite similar to the way in which the Djinn (Wishmaster) forces its victims to make wishes and then turns it against them.

It turns out that Samantha is also destined to be a druid Warrior so she too must die and then be reborn, she stabs herself with a kitchen knife….what is it with making it so painful? Some magic sparkly stuff later and she’s back from the dead and sort of ready to join Kenny and take on the Warlock and what do you know, he’s just rolled into town.

A fight ensues and by fight I mean that the Warlock kills Kenny and shoots his father and their friend, good job there guys. Samantha rides away on a motorbike with the last stone in her hand and the Warlock, who can fly follows her.

Kenny’s is resuscitated by his father with the magic sparkly plant once again and sends him away to stop the Warlock. Before Kenny can arrive, the Warlock gains the final stone and begins to open the portal to hell when it is stopped by Kenny who uses his powers to activate the headlights of a car…. You see, all it takes to stop the ritual is light which is why there is an eclipse…. Why not just carry a torch with you at all times? Kenny stabs the Warlock with a knife tempered with metal from the Holy Grail and he melts into an impressive looking black oozing corpse.

Well then, that’s Warlock: The Armageddon and unfortunately it doesn’t exactly come close to the quality of the original. On the positive side of things though, Julian Sands is still excellent as the charismatic Warlock and delivers some excellent one liners. He gets much more screen time than the original and the movie benefits from this greatly, I think I prefer this version of the Warlock to the first film as he comes across far more sinister and twisted. 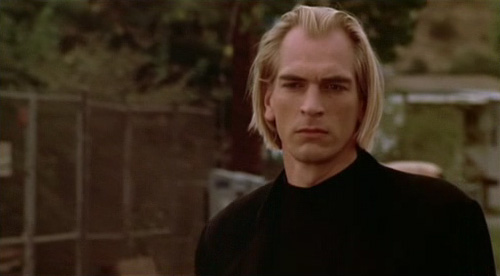 The acting is really good from all involved; even some of the more minor characters give good performances. Another thing I liked about this film opposed to the original is the gore, there is much more of it and for the most part it’s classic B horror movie fare at its best.

The biggest problem with this film is its farfetched plot that only distracts from what you really want to see and that’s Julian Sands being the Warlock, killing people. The concept involving stones of power isn’t exactly original and while the plot involving the druids and their powers has its moments, ultimately it’s quite dull and falls flat. Nobody really cares about Kenny and Samantha, by the end I actually wanted the Warlock to win and end the world, I think that says it all.

The ways in which scenes transition from one to another feels quite frantic and messy.

Hickox has made another movie about a formally serious villain suddenly performing over-the-top kills and cracking wise about it. Luckily for us, the Warlock is a far better fit for this style then Pinhead.

I couldn’t find any images of the magic sparkly plant 🙁