The Conjuring is an American horror story written by Chad and Carey Hayes (The Reaping and House of Wax) and directed by James Wan (Saw and Insidious) which tells the true story of paranormal investigators and authors Ed and Lorraine Warren (Patrick Wilson and Vera Farmiga) who are most famous for being the real life team who first investigated the house behind The Amityville Horror story.

The film is set in the early 1970’s and tells of Ed and Lorraine’s attempts to help the Perron family who have recently moved into a new house and are experiencing increasingly worrying events.

These events range from the death of family pets, dead birds hitting the house, clocks stopping and very typical bumps in the night. The Perron family which is husband Roger (Ron Livingston), wife Carolyn (Lilli Taylor) and their 5 daughters contact the Warren’s at a paranormal seminar after suffering from the events at their new home. The Warrens, after some investigation, decide that the house is in dire need of an exorcism and request permission from the church to go ahead with it. While waiting for a decision, which is delayed due to the Perrons not being regular church goers, things take a turn for the worse with the daughters and mother all coming under attack so the Warren’s are forced to attempt to perform the exorcism themselves thus starting a frantic finale as the Warren’s battle the demon, known as Bathsheba, in an attempt to save the family under siege.

While the story told in The Conjuring is nothing new, a typical haunted house/demonic possession, the film does a very good job of convincing you that you are watching a film that was made in the past and not watching a modern film about the past. It feels very accurately retro and James Wan manages to deliver the scares without coming across clichéd while also using some interesting cinematography to give some fresh perspective on certain previously used ideas. The film has genuine atmosphere and has fairly been described as creepy with the lighting and sound design used to great effect as an atmosphere builder and never as the source of the scare.

In terms of frights, you get what you would expect, a creepy doll, mirror appearances, Hitchcock like birds hitting the house, a creepy cellar, feet being grabbed while in bed, pictures breaking etc…. and while you may have the odd jump and feel a sense of foreboding throughout, there is nothing truly terrifying in this movie. It just works well as a complete package. 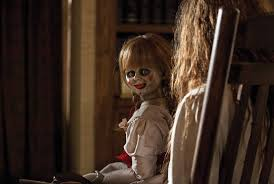 The film feels very much like a documentary and that added feel of realism coupled with the knowledge that it is based on a “true” story adds massively to the overall atmosphere of the movie and that along with some solid all round acting from the cast makes for a decent film.

The lack of digital special effects and CGI while managing to still feel creatively realistic rather than cheap deserve praise. It is genuinely nice to see a demon played by an actor in makeup and it is these important touches that make you feel like you are watching a film made many decades ago.

The reality is that it isn’t an old film though and it also isn’t an old tale and because of that, it cannot help but be predictable in places.

Good acting, good story, good sound and well directed. My only real complaint is that there is nothing new in terms of a horror story. We have seen it all many times before. It is, however, very well told.