After managing to spit out 8 movies over a 17 year period, the Amityville series finally ran out of juice in 1996 following the release of Amityville Dollhouse. There wasn’t a new film in the series for 15 years (not including the remake in 2005 obviously)!

Over that period we’ve had the collapse of the slasher sub-genre, the rise & fall of torture-porn, the re-animation & final death of the zombie, the rise of paranormal/ghostly-going-on horror & the creation followed by the subsequent over-exposure of the found footage sub-genre.

My point is a lot of horror has happened since Amityville last had a movie out there. So much inspiration to delve into, so many ideas to borrow from all with new & advanced filming techniques. It made for an exciting premise knowing the film makers could effectively start with a clean slate.

Or they could just look around & see what was currently popular in horror, copy it completely then stretch a thin coat of Amityville paint over it to make it seem different.

Can you guess what option they chose?

This movie is called The Amityville Haunting but I shall forever call it The Amityville Paranormal Activity because it doesn’t just borrow from those movies, it rips them off to such a degree it’s embarrassing.

It even does the black screen with ‘Night 1’ and the date. Embarrassing.

Released in December 2011, a few months after the third Paranormal Activity movie dropped. This found-footage horror focuses on a family who have recently moved into 112 Ocean Avenue (looking absolutely nothing like the house at all).

The movie opens claiming that the footage you’re about to watch is real. Seem familiar? Get used to that feeling. We then see a group of teens sneaking into the abandoned house where they set about doing what all teens do…having sex while they film everything on their phones. It’s a mess of images with awful fake sex noises & the movies only chance to drop boobs in. The relief that comes when several are killed suddenly off screen is indescribable.

Cut to some time later & the Benson family are moving into 112 Ocean Avenue. This family of four are walking horror movie clichés that have to be seen to be believed. Doug is the ex-military Dad with a gruff & hard exterior, Virginia is the hysterical wife who goes along with everything Doug wants, Lori is the teenage daughter who sneaks out & constantly fights with her folks & Tyler is the pre-teen boy who ask way too many questions & gets on everyone’s nerves. 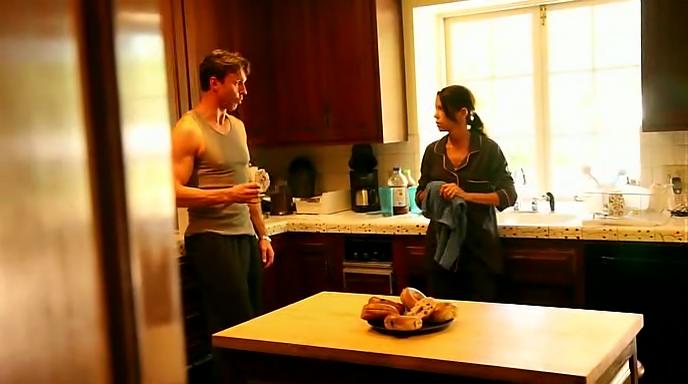 There is one more though; one that I’m so sick of seeing in horror…Melanie Benson is the young & innocent daughter who suddenly finds an imaginary friend that shares the same name as one of the kids murdered by Ronald DeFeo. How many more times are we going to see this crap? It’s so lazy & offers no scares anymore having been way overdone.

To make matters worse though, as bad as these characters are they are made worse by the diabolical acting. It’s a toss up who is worse out of Doug & Tyler, probably the latter as he has the most screen time. You see, Tyler is our camera man for most of the movie wanting to make a documentary so he gets a whole bunch of dialogue & talking directly to the screen. Devin Clark who plays him is just awful making me cringe on several occasions as he described another night as ‘weird’ while looking like he was struggling to remember his lines.

Doug on the other hand is terrible but in a more amusing way. His ‘nervous breakdown’ at the end of the movie had me in floods of laughter & I can only hope that is what the creators & actor where going for.

Describing it as silly is an under-statement.

Being a found-footage movie you know what to expect here. Shaky cam with awful angles & sudden jumps mixed with lingering shots into darkness. Here though they add the static room cameras of the Paranormal Activity series too so we can get obvious & laughable jump scares. 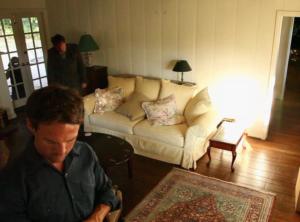 I’ve seen many terrible found-footage horrors that think ‘realism’ is making the movie unwatchable or giving the viewer motion sickness. The Amityville Haunting is up there as one of the worst thanks to the horrible obsession it has with cutting to nothing but a black screen & some noises. This happens so much throughout that I started to wonder if it was an editing error that they couldn’t be bothered to fix.

There is little to recommend here, the scares are childish jump moments with attempts at building tension that fall extremely flat. The ending is predictable & it takes far too long to get to the supposed payoff. Overly long with very little happening throughout, the family never really come across as being in danger until the final few minutes & that source just raises more questions!

A very bad movie & a horrible return from a franchise that I can’t help but have some love for. It’s so absurd for these movies to continue but they do keep on being made! Up next, film number 10 in the franchise…Amityville Asylum.