The 3rd Puppet Master movie is a prequel to the first movie showing how Andre Toulon first came to the Nazi’s attention & offering a more detailed backstory regarding his puppets.

Set in 1941 the film instantly damages continuity as in the first Puppet Master Toulon committed suicide in 1939. In Berlin, Dr Hess is experimenting with corpses trying to create a drug that will turn corpses into living shields on the battlefield. It’s not going well as any bodies he reanimates turns uber-violent instantly. The Gestapo leader, Major Kraus is unhappy & demanding results or it is both their heads.

Elsewhere Toulon is doing puppet shows with Six Shooter, a puppet with 6 arms, shooting a puppet version of Hitler. The show is for kids but is attended by Major Kraus driver who then later secretly takes pictures Toulon administering a formula that makes the puppets alive. 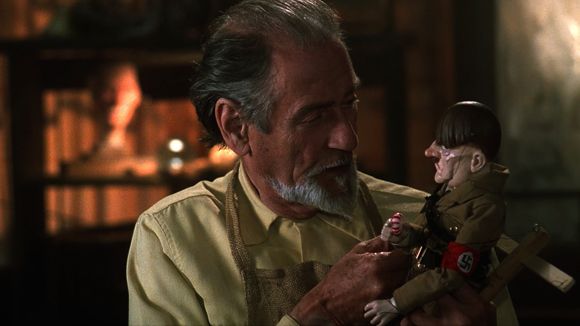 The driver reports what he saw to Major Kraus who wants to arrest Toulon. However Dr Hess sees that Toulon’s formula might be what he has been looking for. He convinces their superior (General Muller) to let him talk to Toulon much to Major Kraus’s distain.

On the day Toulon gives his wife a puppet in her likeness (Leech-woman for those who remember her) they are visited by Dr Hess, Kraus & a group of soldiers. They take Toulon & his puppets but his wife is then shot when she tries to stop them taking the formula.

Heart-broken & filled with rage, Toulon is taken away by soldiers. In the car his puppets kill the men guarding him allowing him to escape. Toulon wants revenge & uses his dead wives essence to bring Leech Woman to life.

There in itself is the big secret…the formula works because each puppet is someone Toulon knew & who had the will to live again, a reason to come back…so to speak.

With his puppets Toulon sets about planning his revenge.

This amounts to him sending his puppets out to kill those that have wronged him while trying to hide from Major Kraus’s attempts to find him.

Puppet Master 3 is a better film then you might expect, as always the star of the show are the puppets & getting a little history about them (in particular Leech Woman) is really interesting. Each seems to have their own personality & their devotion to Toulon makes them sympathetic characters.

The idea that Dr Hess would want to serum to make zombies that would fight for the Nazi’s is great & ties nicely into Nazi dealings with the occult.

The acting from Toulon, Dr Hess & Kraus is all more than acceptable even if Toulon spends far too long explaining the process. What aren’t so good are the accents with Kraus in particular sounding extremely comical at times (how many times can he saw ‘schnell’?).

The film isn’t particularly violent compared to others in the series but it handles the gore well enough. Its ending comes as a surprise though as it’s quite a nasty end for one Major Kraus. Unexpected but not unwelcome…

Another solid entry in the franchise…3 movies in & it shows no signs of slowing down either.