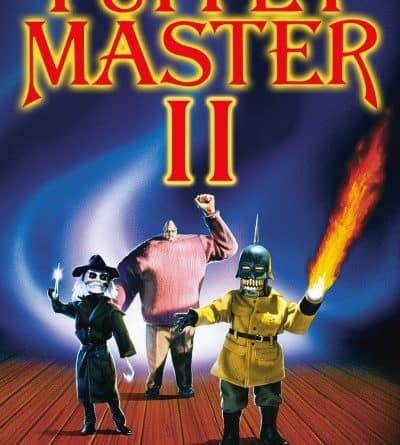 The second movie in the Puppet Master franchise kind of restarts the story again. André Toulon has been resurrected by his puppets to help them prolong their lives. To do this he needs human brain tissue & utilises the puppets homicidal nature to get what he needs.

His task is made easier by the arrival of a group of paranormal investigators at his home – a rundown hotel that they believe to be empty. They are there to either prove or disprove the legends that surround André Toulon however one of them, Carolyn, bears an uncanny resemblance to the Toulon’s late wife…something that doesn’t go unnoticed by the man himself.

He convinces them he is actually the owner of the hotel called Eriquee Chanee & has been away on business. He explains his full bodied bandages (hiding his rotting frame underneath) as a skin disease he contracted abroad & to put them at ease gives them full access to the hotel except his personal quarters.

Toulon/Chanee becomes obsessed with his dead-wife lookalike, Carolyn & sets a plan in motion that will see both of their souls transferred into living life-sized puppets so they can spend all of eternity together.

As stories go it’s quite an interesting one but it is a pity that the continuity to the first film is all over the place. Dismissing most of the connections to the first movie Puppet Master II is quite an impressive feat in the end & even delves into the origins of the puppets themselves…

Like before the real stars of Puppet Master are the puppets themselves & the favourites from the first movie return, Blade, Pinhead, Jester, Tunneler and Leech Girl as well as introducing a new puppet called Torch who can shoot a jet of fire at his victims. He looks particularly nasty, like some sort of robotic army design & he has the standout scene of the movie where he gets to kill a child (albeit off-screen). 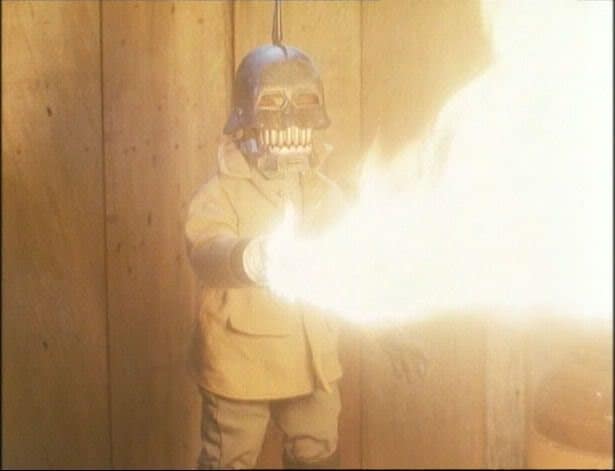 Don’t let the off-screen death of a kid fool you the film doesn’t hold back when it comes to violence & there are a number of impressive death scenes including my favourite…drill to the head!

Perhaps one of the more disturbing scenes actually involves the death of one of the puppets. Leech girl gets caught trying to attack a farmer woman who throws into a fire. We have to watch as Leech girl panics in the fire before burning into ash. All this is watching by the wide-eyed Blade & Torch…it packs quite a hefty punch.

As the film progresses & Toulon/Chanee’s interest in Carolyn starts to become quite unhealthy & there is a really awkward dance scene where I actually felt a tad sorry for Toulon. Eventually he gets to start his living puppet ritual after Carolyn goes to investigate his private quarters. She is captured by the puppets & in one of the better scenes; Toulon reveals his rotting frame under the bandages before cutting his own throat & transferring his soul into the man-sized puppet.

He fails to get his way in the end though as Carolyn is rescued & the puppets, enraged at Toulon’s betrayal turn on him & kill him. They then transfer the soul of one of the earlier victims into the female life-sized puppet & she becomes their guardian.

The life-sized puppets have to get a mention for being down-right freaky looking. The make-up is done so well & very convincing. Even though the movie is showing its age (the equipment they use is a Commodore computer!) there are genuine moments that surprised me.

A much better movie then I expected & one I enjoyed much more as well. I get a kick out of watching the puppets do their things even if I do wonder about their motivations. The restart of the franchise while nodding towards the original was a strange choice & one that could have been handled much better. Still Puppet Master 2 is a movie of moments & the ones that it has are a blast to watch!